As many of you already know, a 34 year old Black man named Aaron Alexis went on a shooting rampage in a Washington D.C. Navy Yard leaving 12 people dead himself included.

He had a valid pass and security clearance to enter the premises, and brought in a weapon and should have been stopped at the door. At the time of this article there are so many questions that have not been answered as the investigation continues.

But at this time I still have a few words to say because living in this particular time, I expect even more frustrated people to take their grievances out in the dysfunctional way that Aaron Alexis did this past Monday morning.

It was just brought up recently that Mr. Alexis had some mental issues and heard voices in his head. 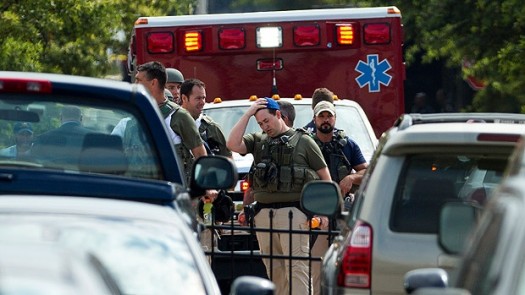 You will hear many Black people whisper that “why did he have to be Black” as it’s generally accepted that to randomly shoot and kill strangers in public is just something that Black people are not known to do in America. But the fact of the matter is that as we are assimilated into the mainstream society at an ever increasing rate, expect some of us to adopt the mindset of that majority that we have been steeped in like the hot cup of water extracts the essence of the tea bag.

It has been speculated at this point that Aaron Alexis was very upset that he wasn’t paid properly from some prior work done in Japan in a months long assignment there, and this information came from his former roommate Michael Ritrovato who has a very unique position into the thinking of Mr. Alexis.

But whatever the cause of this latest rampage, we have to understand that security in these sensitive areas must be tightened up and that no matter how great a system my be, it must have checks and balances to cover any possible human error.

But no system of security can stop every unexpected shooting spree and if this were to happen randomly out in the public by more people, most would be impossible to stop because the fact of the matter is that you can’t watch everyone all of the time.

But my thing is what is at the root of this type of outburst even with all of the many means to reach out to each other to communicate when our personal frustrations seem to become unmanageable?

I believe that even with our many ways to speak with each other that we’ve become an even more isolate society from each other because we’ve gotten away from true communication.

No longer do we have the people in our lives that come around to check on us and make sure that we are doing okay and we most definitely feel the isolation and loneliness even more so than it really is. This perception creates a mental pressure cooker effect making some of us react in such a cold calculated violent manner like the one that was executed by Aaron Alexis.

And while I’m speculating on his state of mind I have to say that I nor anyone else knows until a thorough investigation has been completed. But wouldn’t it have been nice to have caught this mans frustrations early on which in fact would have left his victims alive and well to this day?

The other observation that I made in these types of attacks is that while one has to dwell in a place of controlled madness to carry them out, for the most part many of these cold blooded killers were not the dumbest fruit in the batch. Many are very intelligent people who lost a grip on reality as their frustrations and anger took over to do the unthinkable.

This means to me that these types of rampages can happen literally anywhere as their location of choice is turned into a place that is more dangerous than any ‘hood of a Black neighborhood ever could be! As a matter of fact, the mayhem created in these rampages the ‘hood has NEVER seen!

But to wrap it up we know that our society is taking a turn for the worst when we can witness such a cold-hearted snuffing out of innocent lives. My heart and prayers go out to the families of the victims as no one deserves to be on the receiving end of such an evil act.

While we’ve always had hate, racism, exploitation and these dreadful acts committed throughout the history of this country, it just seems to me that we are not our Brothers keeper but rather his killer.

We move about the world now paranoid of the worst happening instead of enjoying every moment of our day treating total strangers like they are the best of friends.

What happened to those times?

We now walk out of our doors in the battle mode where every person in our path is a possible assailant who is hellbent on robbing us and taking our lives.

why do you think our stress levels are through the roof and our collective health has diminished into nothingness?

If we strive and desire to have a loving community the way that our Creator desires it to be, we need to reach out to that stranger who may be having a bad day and show some concern, love and a human touch that just may be the very moisture that the dry soil of their hearts needed to make it through their rough personal time period.

We all need to feel as though someone cares for us so in order to get it we have to give it! Do this immediately and watch our planet change overnight!

Previous : A Conversation With The Nation Of Islam’s International Representative Dr. Akbar Abdul Muhammad – The LanceScurv Show
Next : Mister Cee’s Aids Health Public Service Announcement: Did He Come Out Or Was He Tossed Out?