This story was forwarded to me by one of the countless LanceScurv sleeper cells out in the field across the diaspora and I felt the need to share this with the faithful readers of this blog with a few added thoughts of my own.

Here is the tale of a young 19 year old Penn State Abington student and a very beautiful Black woman by the name of Amber Mitchell.

She hails from the city of Willow Grove in Pennsylvania and was sent home from her job at Abercrombie & Fitch by a manager who felt that her newly dyed blonde hair was inappropriate for her employ there because it didn’t “look natural!”

Now mind you, I personally don’t fancy seeing my Sisters dye their hair blonde because to me that makes a statement that they feel that a more “eurocentric look” is much better than what God has blessed them with. But my personal views on this story will not stop me from defending a woman who really didn’t do anything out of line in my eyes at all for that type of action to be taken.

Her work schedule was cut from five days to one and was told that maybe if her eyebrows were dyed in the same color it might work. Her manager is a woman who had “different skin” yet had blonde hair herself, yet the bosses evidently signed off on this decision because Fox 29 News out in Philadelphia made numerous attempts to reach out to the Abercrombie & Fitch corporate offices by e-mail, phone and even Twitter but haven’t received a response back yet!

Now what if her hair grew out of her head like that from birth? Would she be refused the job that she now has because it didn’t look natural? And really, who in the hell decides what is natural or not? I don’t know about anyone else here but I smell lots of arrogance somewhere here in this scenario and I have to say that I know it all too well in my personal experience on these jobs who want to rule your life.

Maybe this is not the case but I also have to say that there is a lot of catty behavior in these retail outlets and favoritism when you get certain types of women closed up day in and day out together with the added pressure of having to grin and bear it with a demanding public.

But since this woman who told her this was a woman who had “different skin”, let’s go in on this issue with a pinpoint precision and see if these rules hold water across the board.

Now I’ve never been to Willow Grove Pennsylvania but I have been many many other places in that state and let’s just say that many people with different skin will oftentimes look at you as though you were an alien from other space when you don’t look like them! Just my two cents but I just have to say it as it was my personal experience…….take it for what it is. 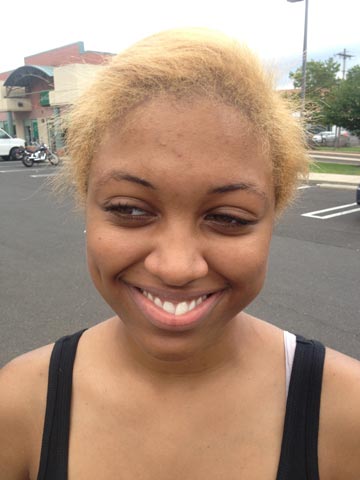 But anyway, I now live in Orlando Florida and HAVE been to a few Abercrombie & Fitch retail outlets here and in the surrounding areas and noticed that some of the women with “other skin” had obviously purchased BREASTS that did NOT look natural and weren’t in proportion to their flat backsides! Now did any manager send THEM home? I think not, so why should Amber Mitchell be chosen to made an example of because of a quick dye job that involved no unnatural cutting into her flesh with the insertion of two silicone bags?

To go even deeper, at my last trip with my Wife to this overpriced retailer, I noticed a friendly young lady of “different skin” who seemed to have much fuller lips than she had before since the last visit there! While she was a very pretty young lady who possessed “different skin”, I don’t really believe that she got sent home because of her need to get fuller lips or rather get lips when in fact there were none there before.

One more thing! Here in Florida, many people arrive to this state from all over the world with the intentions of enjoying the sun, beaches and theme parks when all the while looking forward to going back home sporting a fabulous tan that looks so much healthier in a climate that is cold for most of the year. But many who live here also feel that it is a status symbol to have a sun tan as it gives off the impression that one has time to enjoy an affluent life of leisure in the sun while others toil endlessly wishing merely for a day off to rest.

So if an Abercrombie & Fitch employee showed up to work sporting a complexion that wasn’t in its natural state because of the countless trips to these artificial tanning beds and ugly darkening cremes that ain’t fooling nobody, would they TOO get sent home because their look wasn’t natural?

DON’T GET MAD with me, what’s good for one is what’s good for ALL! If you are going to discriminate with such a weak ass reason to come after an attractive and ambitious young Black woman you need to come better than that because the streets are watching you!

But let me see, Amber Mitchell from what I can see doesn’t have to go to a tanning salon and pay for the beautiful skin that she has…….

She doesn’t have to disfigure her already sexy body with a boob job that makes most who get them look like some type of stiff corpse that got up out of a coffin full of embalming fluid trying to pass off those hot water bottles as natural breasts!

Amber has the most beautiful pair of lips and I don’t think she would ever have to stick a needle in them to get them fuller as she is right on point in the beauty department hands down!

THIS is the reason why I believe Amber Mitchell had a problem coming at her from “that manager” who probably can’t even manage her own amounts of extreme insecurity in the presence of one who probably gets more attention there in the store than all of the associates who work there combined.

Let’s not even mention the Butt Injections that many have to get to possess the same well rounded derriere that they used to make fun of out of a secret envy to the Black girls in school, trying to make them feel bad for something that they knew nature would NEVER leave for them under the Christmas tree.

So when this blonde haired manager saw Amber Mitchell stroll on in to work that day sporting a blonde hairstyle she most likely said to herself: “Oh HELL NO! You were born with a nice complexion, a nice butt, full lips and real breasts, the last thing WE of “different skin” have is our blonde hair and I’ll be DAMNED if you will get even MORE attention for that too!”

So there it goes, my take on a story that probably will continue to be ignored by the so called mainstream media, but here at LanceScurv.com and ScurvMedia LLC, we will continue to share the relevant stories that will show us how to deal with similar situations in this world as it arrives. I promise to keep up with this one and would love to interview Ms. Amber Mitchell after the legal dust has settled for her.

So to all of my Sisters, know that the BEST BEAUTY is the kind that you don’t have to pay for! Walk tall knowing that others want to be you in secret but will demonize you publicly at every turn. You already have the looks so make sure to develop all parts of your being to the glory of God and manifest yourselves as the Queens that you are and never be made to feel inferior by those who seriously wish that they could be you.

You possess power beyond all measure when you are right and exact within yourself and many others know this already from the history books that they’ve been so successful at hiding from you. you are the Mother of all civilization and I am all too proud to say that I am a direct descendent from that scorned Queen who possesses in abundance that spiritual antenna called melanin.

Amber, walk back in that joint sporting dreadlocks and watch them come with yet another reason to cut your days of work literally down to nothing. It’s the cost of being who we are in corporate America as those who’ve had the nerve to enjoy some semblance of self expression have been made to pay the ultimate price with a pink slip.

Welcome to America Amber Mitchell, learn from this experience and learn from it well!

The Brother Who Will Always Support & Love His Sisters,

Previous : Skittles, Arizona Iced Tea, Hoodies And Independence Day – Are Black People Foolish To Celebrate It?
Next : A Conversation With Malik Aziz – The LanceScurv Show

Thanks so much for the positive feedback.
-Amber

I got your back Amber! While I know that there are things that right now you cannot say because of the legal ramifications, know that I will!

So after the dust has settled and you can talk, reach out to me because I would like to have you as a guest on my show to speak about this experience and if there is anything that I can do from my end just let me know! Hit me up when you can: 407.590.0755