The Shiloh Missionary Baptist Church hierarchy voted for Pimp Pastor Juan Demetrius McFarland to step down at a count of 80 to 2 yet this brazen egomaniac had the nerve to return this past Sunday with the full knowledge of his standing and commenced to preach to the minuscule congregation of 50!

I really don’t know where to start with this one because my mind is baffled from this incident in so many ways.

First of all, why did the church board stand by and let this demon return to have his way in the pulpit while ignoring the vote?

What kind of men do they have in the church if they will stand by like an impotent male’s genitalia and not do anything while this drug using HIV positive womanizing self serving pimp thumbs his nose at not only the congregation, but God Himself?

This is too common a practice anyway and this illustrates why so many people a turned off to going to the physical brick and mortar structures called church even though there are great spiritual leaders out here in the world to take guidance from.

But what about those who sat through this service that really wasn’t supposed to be?

Didn’t those who stayed to listen to this fraudulent preacher understand what had transpired mere days before?

The fact that they came out reminded me of the people who came out to support Bishop Eddie Long after it became evident that the allegations of his multiple boy-lovers were true. 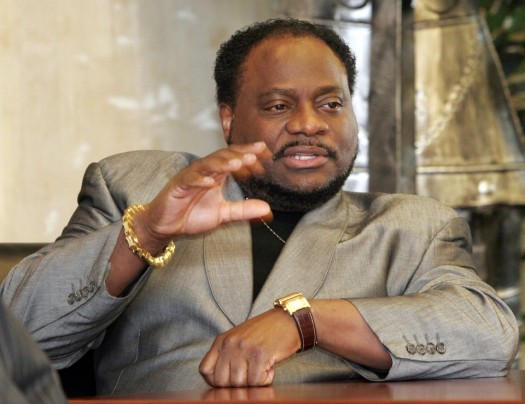 Do these people really feel as though they are going to get some brownie points for hanging in there under a man who doesn’t give a damn about the church, the congregation and the women who he so readily bedded down even though he knew that he was HIV Positive for well over ten years?

As I said earlier, my mind is baffled indeed!

But to me the saddest aspect of this major abuse is not only the fact that there are the women who he manipulated into having sex with him who might be infected with the HIV virus, but the fact that they are too afraid to step forward publicly to move forward legally against him because of the shame that they are afraid of dealing with!

I mean, this man cares not for your life, your family, your children (If you have any) and your spiritual destiny and you are going to let him simply get away with it here on this level?

Sure, God always gets these bums in the end, but have some consideration that there just might be someone else out there who might not know exactly who he is to end up infected because YOU didn’t want to be ashamed!

Now THAT to me is being just as inconsiderate and as selfish as Juan McFarland!

Ain’t that much shame in the world that would stop me from administering an ass whipping on Juan McFarland that would make him feel the shame that he should have felt the first time his thoughts got out of line to consider the devious deeds that he executed on these women.

But understand that this is why these men in power can be so brazen in the execution of their sins, because they well depend on the fact that you might have a heart or a shred of decency to not want to upset the applecart at someone elses expense so YOU bear the pain of their iniquities while they skip effortlessly from victim to victim with the greatest of ease.

Stop subsidizing the work of the devil by telling yourself that it is God-like to not make waves!

Hell! If you worship the true God who is the ONLY ONE who made the waves, YOU as His child has the right to make all of the waves that you wish until the situation gets right!

We have a serious ongoing problem in the Black church and every Black church that I have ever attended has some degree of this unacceptable buffoonery present in it and it has made us the laughing stock of the planet.

We love man’s church more than we love the righteousness and straight path of God!

When God tells us to do something with a sense of urgency you do not have to consult with the so called Pastor to get his limited carnal input on a divine command.

But we never ever grasp this understanding because we have subconsciously replaced God with a man and treat this man as though he is God!

So the Pastor Juan McFarland’s of the world are arriving to our doorsteps off of the assembly lines everyday and they know the game so well that the righteous words that they spew to “get in” good with you are merely the Trojan horse that will allow a devil to stand in your pulpits.

Churches should now have Mental Ward status because some of the people there carry on as if they’re crazy as hell.

He’s a married man but you never once thought to put him in his place when it got out of hand. I didn’t once hear that he was accused of rape so the women who slept with him HAD to be in agreement with his freakishness.

Unprotected sex not only exposes one to Sexually Transmitted Diseases and AIDS, but you might get an unwanted pregnancy in the mix too. So you are shamed to come forward because of the shame that you might feel if you were found to be HIV Positive and merely one lover out of the many women that Don Juan bedded down?

Then try showing up to the service with a huge gut full of the Pastor’s thick murky white drug laced Baby Juice and tell me what you’re going to explain to this cowardly congregation?

“We don’t want to hurt the Pastor, we just want our church back!”

When I heard this to me it was the epitome of a pathetic mentality.

They sounded like a scared nerdy school boy who had his candy stolen in plain view by the school bully. When the teacher inquired as to why this student was crying all he can say is that “I don’t want to get the bully in trouble, I just want my candy back!”

When someone takes something from you or as in this case doesn’t adhere to the rules then we have to venture into the next level of force to make sure the laws will be respected.

But Don Juan McFarland played the men of the Shiloh Baptist Missionary Church in the same manner in which he played his holy roller sex kittens. He did what the heck he wanted and stepped brazenly with his arrogance while the men sat and did nothing.

I don’t know about these people but the God I serve is a strong God.

The God I served is a mighty God!

The God I serve has His house in order and if there’s any house out here claiming to be a House Of God that is in the kind of mess that thrives in the Shiloh Missionary Baptist Church then that church is really not a House Of God AT ALL!

Sure, no church is perfect because we as humans are far from perfect, I would never expect perfection in an imperfect vessel.

But this doesn’t relieve us from striving from perfection and it is those ever diminishing set of moral standards that have obviously thrived at the Shiloh Baptist Church that have allowed such a deviant hell-raiser to even have the nerve to step up to the pulpit to move his mouth to claim that what was coming out of it was Godly.

The latest that I’ve read is that the church leadership – if you can call them that! – have finalized a civil lawsuit that includes a restraining order specifically for Pastor Juan McFarland that will keep him off of the church grounds but you can best believe that somehow someway some of the foolish flock will continue in the spirit of “Touch Not Thine Anointed” to keep this loser propped up as a man of God elsewhere.

But when a drug abuser egomaniac lying narcissist gets a job where he is the focal point of many man hungry foolish women, being adored by many, having access to lots of money as well the prestige of being a pastor and local celebrity, you can’t expect them to go gently into the night without one big fight!

I couldn’t have fabricated a more baffling story!