Herman Cain has a penis and he wanted to use it.

All men have penises that they want to use at one time or another and every man has to go through this thing that most women don’t truly understand that I call the “Penis Struggle!”

Having a dick in today’s world of sexually suggestive images bombarding your mind at every turn and the women who utilize their powers of titillation over us men to get what they want out of this life isn’t a very easy thing to deal with when one wrong move could either have your character smeared for years on end or even accused of harassment.

While it wouldn’t stand up in court like the penis stands up at the sight of well rounded derriere stuffed impossibly into a pair of form fitting denim I would have to say an acceptable answer to the bizarre behavior of most men would be to say “The Penis Made Me Do It!”

Yes! Ladies, while I am not taking up for these rude men, rapists, actual harassers and other forms of aggressive male perverse behavior, I’d have to say that it ain’t easy possessing a fully loaded penis!

Too many of us men consult with our dicks before making the major decisions in life that almost always turn out jacked up in the end because we thought with the wrong head.

This is a fact and from what I am seeing the is no end in sight for the foolish behavior that men do because of them possessing this very potent instrument of procreation and pleasure. For the most part we are slaves to the needs of our dicks. While I must applaud most men who have not succumbed foolishly to the constant exposure to the tight jeans, plunging necklines and inviting cleavages as well as the skirts that barely cover the very thing that we want to see, too many of us still make the foolish decisions to go after that erotic illusion that usually comes with a very steep price tag indeed!

While the facts although somewhat “hush-hush” are coming out about those two employees who were paid off after unwanted sexual advances that were allegedly made by Herman Cain, here I am thinking how impeccable the timing was because of his ever growing popularity!

Someone out here knows one of the unwritten rule of success in Amerikkka indeed!

Well let me tell you like this, Black male sexuality is not acceptable in the corporate and political arenas. Why? Because this is an area where many white men who are actually in charge of things feel insecure in because of a deep subconscious insecurity that is the flip side to the indoctrination that we as Black men have culturally absorbed as a result of the ravages of slavery on our subconscious minds!

They will accept you into their inner circle more readily as a Black man if you leave all traces of your heterosexuality at the door. This is why they will accept you as a gay Black man faster because you are not a threat to take their women…….and if you are not effeminate you better water down your aggressiveness to levels that are undetectable. Better for you to be clutching the latest issue of Time magazine to blend in and sooth their fears than feverishly absorbing the autobiography of Malcolm X! LOL!

You see, we at one time would have been damn near killed if we had the nerve to try to learn how to read because we would be very dangerous to the slave-masters hold on us if we could outsmart him in the intellectual department and he couldn’t have that! So those of us who COULD read and write would have to keep it “hush-hush” and play the big strong ignorant ” work me like a horse” buck role to not be seen as a threat!

But to breed more slaves for the slave-master was perfectly acceptable! “Have as many babies as you wish and have no control over your libido because in the end nigger it’s gonna make me a ton of money” or so it went on many a plantation.

Isn’t that the way it is now? The States across Amerikkka seem to encourage the wayward behavior because of a lack of control over this powerful thing called the penis because at the end of the day we will be locked up for not being able to pay child support therefore giving him another reason to get paid through his system of incarceration from the jobs that WE helped to maintain because of our presence there in the first place!

And this is the area of “expertise” where we as Black men (Not all of us, but too many of us!) feel as though we have a sense of power and domination! Not in the boardroom but in the bedroom! Now with our intellectual excellence displayed with a pen in our hand, but our animalistic skills with our dicks in our hands. It is sad but this a role that far too many of us embrace and never go beyond it to challenge ourselves to be the best that we can be on all levels of existence.

So to capitalize on our narrow minded role in this society the Ghetto-Hood Plantations are scattered across the land with well developed eager to please hoochie-mamas who are hell bent on getting paid by becoming pregnant and getting that government check so that they can qualify for all kinds of government subsidies that has our neighborhoods resembling the plantation all over again!

No problem as far as the oppressors are concerned.

But when you are brilliant Black man in this country who is attempting to go higher in an oppressive than what most are ALLOWED to achieve then you must be shot down when your success has superseded what is acceptable for “your kind!”

So what arena as men do we Black men always seem to trip ourselves up in?

Right! You guessed it! It’s being able to control our penises in a world that views it as a threat!

You see, it’s okay to use that hard Black dick when in the ‘hood as it’s used to knock up another faceless hoochie to keep the modern day plantation of the prison/welfare system in full steam but it is NOT, let me repeat, it is NOT acceptable to have enjoyed a measure of success beyond that of the “average” Black man and still not have control over that dick of yours!

Because it plays on the fears and insecurities of the White power psyche that is very fragile in that category, hey, they have dicks too but they have accepted that what we have is out of this world and they will not stand to have us working, living and socializing around their women with the possible intent of wanting to screw and stretch them far beyond what they could ever achieve in the bedroom. Now people, don’t get mad at me and say that I am saying all white men are like this but I would say that most of the old guard of corporate/political racist power-mongers have a taste of this in their mind indeed.

So the ultimate smear tactic on Herman Cain is to make the general voting public see him as a wayward sexual beast frothing at the mouth just waiting to get his Big Black Dick between a lily white breast cleavage of an innocent “Sweet Polly Purebred” ( Remember the cartoon from back in the day called Underdog? LOL!) white woman!

This is unacceptable! Now we must tear him down and not vote for him! He is just like all of the other no good niggers who can’t say no to a piece of pussy in his midst! See where I’m going with this?

It’s easier for the powers that be to deal with an angry Black man with a loaded gun than an erect penis hellbent on fertilizing everything in sight because he has something for you and your little pop guns, he has TANKS and BAZOOKAS! So you ain’t threatening nothing with a gun but a big Black Dick is not as easy to deal with especially with the insecurities that many of them may have!

Sure, I know that I am going to catch enough flack for saying what most are afraid to say but SO WHAT! I’ve been living in this skin of mine all my life and will tell it as it is no matter who doesn’t like it!

Heck no! It’s those who have a fascination/guilt complex on the very thing that they have a great fear of the most!

So to subconsciously manipulate Herman Cain into that position is to attempt to kill off any chance of him ever becoming the President of the United States at all!

…….and he just said last week or so that racism doesn’t play a major role anymore as much as it once did in this country. HA!

Although it is subtle in the racism department as far as these allegations are concerned I will also like to add that if he is found to be guilty of them then he needs to take it like a man and deal with it, because sexual misconduct is not acceptable no matter what the platform! As a Black man he should have already known that but when SOME of us become intoxicated with the power that is not usually given to us to enjoy, we can sometimes forget where we came from and how the world sees us because of the skin that we are in!

Sad but true. When you are a brilliant Black man on the rise in this country your personal moral character and track record of decency must be impeccable or else it will be used as fodder to thwart your attempts to reach the pinnacle of your chosen field of expertise!

Now while I don’t really agree with Herman Cains politics all of the way or even really dig him as a man (He does say some off the wall things!) I have to call it like I see it and I hope that the allegations are not true but if those two young ladies who claim to be the victims of Mr. Cain’s sexual advance got paid six figures each then what does THAT tell you?

Stay tuned. This is going to be one long hot drawn out political race to the Presidency indeed! 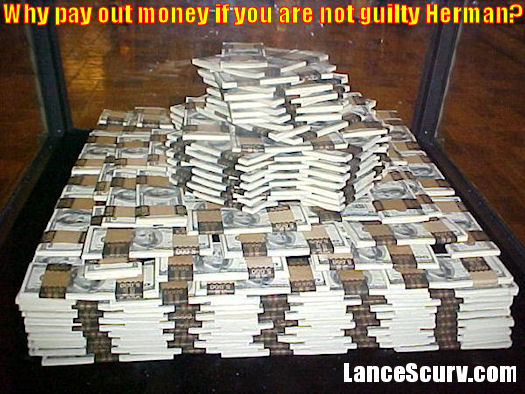 Click here for the POLITICO article that goes more in depth on this story!