I’m typing this blog into my phone as I wait to be relieved by a mechanic because of a broken down bus. What else is new?

But I have to say that I’m not upset at such an unexpected set of circumstances and challenges because this is something that is bound to happen when you depend on anything manage or mechanical. It’s just part of the game.

So now I am sitting at a very busy bus stop here at the Universal CityWalk in Orlando Florida, a place infested with tourists from all over the world that I’ve driven through countless times in my many years here as a bus driver but can count on one hand the amount of occasions I’ve actually been their to explore their attractions. To me, I don’t feel as though I’m missing Anything because after the crazy life that I’ve lived, it takes a lot to amuse me on the most basic of levels.

That being said, it isn’t like I am bored out of my mind because I have to admit that it is quite nice to see this place from the standpoint of my passengers, although I wouldn’t want to be a regular rider waiting on the bus everyday knowing how you can’t really depend on them when you need them.

But of course I wouldn’t be me if I didn’t look deeper into a situation than the surface appearance. So what I am feeling now is that life just wouldn’t be the adventure that it is without those unexpected predicaments that we are placed in from time to time to jolt us out of the complacency that robs us of the opportunity to see just really how huge this life really is.

While I can basically say that I already know how big this world really is it would truly be ignorant of me to believe this because the moment I feel that I do is the exact time that ignorance can seep into my mind.

One can never encompass all that is going on in the city that they live in at any given second much less the entire world!

So having to deal with the unexpected breaking down of my bus forced me into a position to recalibrate my psyche and let me know that I began to possess the same warped view of my immediate world that I have accused others of possessing in the past.

It happens not because we want it to but because it sneaks up on us whenever we get caught up in our repetitious routines.

As I relegated my existence for the rest of the night to the mechanic who probably had a long laundry list of things to do before he could even THINK of coming to save my fatigued soul, I told myself as always to make the most of a bad situation and I’m so glad that I did.

I took a seat over at one of the other bus stops that service the tourists who want a direct shuttle to their hotel and decided to absorb life from their end of things and it was quite interesting indeed.

What I’ve found is that many of us – especially those who like myself live in a city that attracts many tourists – tend to get stagnant in our outlook in the place where we live. It hit me so hard that while Orlando to me had become such a God awful backward ass place to live, that there were others who made the trek here from every corner of the planet and were overjoyed just to arrive here to enjoy what it had to offer that I’ve taken for granted.

I felt a tap on the shoulder and as I turned around I was greeted by an mature Asian gentleman who had the biggest smile on his face but hardly spoke much English. He saw that I was in a bus operator’s uniform and thought that I could help him to figure out a dilemma that he was in as far as local travel was concerned.

I helped him to the best of my ability but after about 15 minutes of trying to figure out what each other was saying (And it was apparent that we both were guilty of using each other to kill the clock! Lol!), I discovered that he was here with his entire family and wanted so bad all of his life to come here to the United States to see what it was like for himself.

His son and daughter went to school here and were going back to China to pursue their careers as doctors and he was so happy and proud of them. He shared with me that he was born into a peasant farming family that didn’t have much but considered his life to be victorious because of where his kids are in life right now.

He shared with me in broken English that he was always brought up in a positive manner and was told to always challenge the rainbow in front of you in order to work hard to EARN a better life. I noticed a tear in his eye as he shared this with me. He eventually introduced me to his son and daughter and had to leave to catch his shuttle bus. 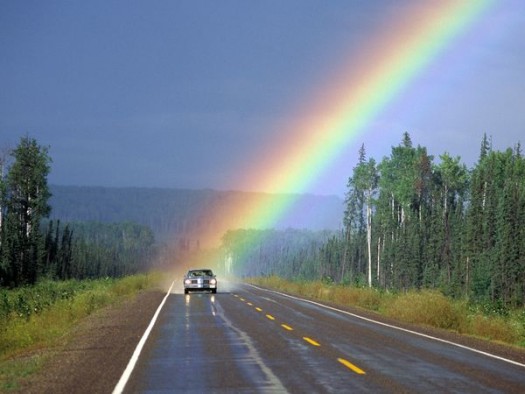 I found myself staring off into space just thinking about how deep a statement that was but my thoughts at that exact moment were broken by the profanity laced diatribe from a young “female” barely out of her teens screaming about how screwed up – not her exact words – the public transportation is here in Orlando and how she is sick and damn tired of living here. This was a very interesting direct contrast when compared to the tourists who were so overjoyed just to be here.

Both were in the same place but had far different perceptions.

Isn’t that something? I mean how the same environment can lead to completely different perceptions and reactions to those viewpoints? Look at the Chinese man to whom I just finished speaking to, he was a peasant farmer who probably never saw a public transportation bus for the first half of his entire life and probably went through more hardships than the minor inconvenience that our loud no-class female hoochie mama ever did!

But look at how gracious and thankful he was just to see his kids make it to a better place to give them a shot at a life that he could only dream of. What does this tell you? Well it tells me that we can color our reality by the attitudes that we possess and the mindset that we are determined to hang on to. It’s all in how you look at it!

So now after witnessing this real life lesson I too will always adjust my outlook on life and seek to expand it to embrace a wider scope of realities so I don’t get caught up in such a local mentality in a world that should be viewed in its total global glory. But we allow our worlds to choke us off like shrink wrap around our minds because we get so focused on our narrow little paths so much to the point where we forget that a big world exists around us.

…….and while we are at it, let me speak on what many call the ‘hood mentality, which is, a cross section of the general thinking of one who lives in the more visibly downtrodden areas of a city and views the world in more gritty terms and feels as though there isn’t much hope to make it out of that place other than receiving a miracle. Survival dominates most thoughts and any gain might set recipient up to get their good blessings jacked.

While the factors causing this mentality are very much a real thing in what I call these ghetto plantations, I still believe that no matter WHERE you are, your mind is stronger than any environment and you can succeed in any arena that you choose.

When you are told that you can’t lose weight, hunker down and make your detractors look like fools.

When you are told directly or indirectly that you lack some basic skill, master it and shut those fools up!

The worst thing that one can do is to accept and absorb the negativity around them and BECOME all that they have taken in to live it out as though they can’t manifest a completely different magnificent existence. I am saying all of this to say that like that Chinese gentleman that I had the pleasure of speaking to because of the breakdown of my bus, we need to ‘see” beyond our limited realities to our unlimited possibilities.

That young female with the dirty mouth and negative demeanor is actually killing herself slowly and the life that she could live because of how she can’t see past a bus that was late in arriving. We have got to see over the immediate horizon’s of our life and challenge the rainbow that reflects so beautifully in front of us after our personal storms.

So my advice to everyone is to slow things down a bit to take a walk down a different street or hold a conversation with someone who doesn’t look like you to learn how someone else thinks. What you might discover is that their enthusiasm is so infectious about something that you took for granted that it might inject a sense of life into those limbs of yours that have long feel “asleep” because of the predictable routine that has become your life.

Making the change in your thinking will immediately make the world look like the wonderful place that God meant for it to be.

This was a very enlightening blog! Challenging the rainbow is very insightful since GOD himself gave the rainbow as a covenant between us and HIM and that there will never be a flood to the magnitude and also HIS declaration and depths of HIS love for us! GOD will withhold no good thing from us and the Chinese gentlemen reminded us that the covenant is there and we should BELIEVE that we can achieve anything we set our minds to achieve, without limitations and reservations. No circumstance is too great to defy odds, because so a man thinks, so he is! GODs providence,favor,purpose, and man's will, resolve, and words are what makes the difference in life.. GOD gave man power of speaking. Your life will follow your words. Life is what YOU make it! Thnx 4 the good word for soul reflection..