When I first saw the YouTube video that has been burning up the Internet about Angel Adams, the Tampa Florida woman who had fifteen kids and was publicly demanding that someone had to pay for the care of her flock of children, two questions came to mind when I viewed the in depth coverage of her self inflicted plight.

First off, I was somewhat embarrassed that this hoodrat was on “stage” speaking out like this to the world as though she had absolutely no sense of responsibility or accountability to understand that she was the only person who was to blame for putting herself in this situation.

When did she begin to realize that things just might get a little tight financially for her? Maybe after around plopping out kid number fourteen or fifteen?

She did it to herself!

The other thought that came to mind as I watched the video was that it was going to get a tad bit harder for many ambitious Black women who just might live in the ‘hood and have just a few kids but are completely responsible for their obligations but may have fallen on to bad times because of a man that may have left them or an unexpected sickness that threw her family into a state of turmoil.

Every Black woman in the ‘hood ain’t that head shakin’ profanity spewing loud pissed off at the world type who has to get her nails and hair done every week so she can look right when she leaves her kids home all alone so that she can make sure to get her groove on at the club all night long!

Every Black women isn’t like that at all and we know this but there will be far too many people living on the fringe who will garner their opinions based on the images and impressions received on the television set. The bad part is that many of these who live so far out of the places where they have the interactions with enough Black people to know that the example of an Angel Adams is not the norm might be in a position of authority to strike down the employment efforts of that ambitious single Black woman with a few children all because of their fear that she will manifest the same ignorant qualities that they’ve observed Angel Adams brazenly exhibit on television for the world to see. 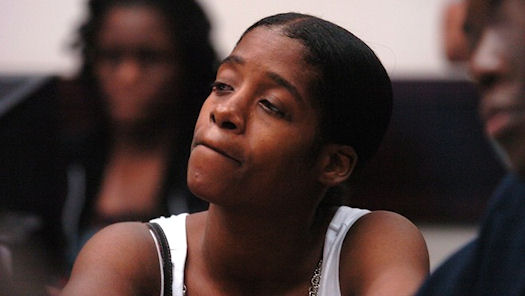 But what really caught my attention when I watched the coverage of his on going ghetto saga was how Angel Adams really felt as though someone else was responsible for the well being of her kids and she spoke as if she was demanding society to take care of the lives that she so irresponsibly brought into this world!

When are some of us going to finally understand that no one owes you a damn thing?

And for those lazy ass women (And men, there are some who think like this too!) who still think that pushing out child after child irresponsibly guarantees you a salary from the government please think again. The gravy train has stopped running and your days of playing the system will soon be over if you haven’t figured it out already.

You thought that you could use your pussy to avoid the responsibility of having to live a disciplined life to show an interest in going to school (Before you had all of those kids) to improve yourself while working and living below your means until your righteous breakthrough came.

But noooooo! That was too corny for you to do! Work? Hell no! Go to school? You felt it was a waste of your time!

Why do all o those things when you can push out baby after baby and secure an income from the government while they rained down upon your cheaply weaved dome that covers a brain void of any amount of intelligence all of the free amenities that will be deliver directly to your mailbox while you sit back at home on your free lifeline government telephone talking to your other stink ass hootchies friends watching the Maury Povich Show that regularly shouts out the words that you love to hear: “You ARE the Father!”

…….another Sister Hood-Rat getting paid exhibiting the fine art of Hoochie-ism! You go girl! Ain’t the system a GOOD thing?

The welfare system ain’t going for it as it has been pushed to the limit and no matter what State a Hoochie Hood Rat resides in, the hoops that one has to jump through to get a free ride has just been raised higher.

Now as the hoochie gets older she begins to feel the consequences of her foolish decisions as she observes the wonderful pristine clean gainful lives that those who sat alongside her in high school (And graduated) went on to achieve what the party girls felt were endeavors that just weren’t as important as looking hot for the upcoming party that next weekend.

Add to this the modern day phenomenon called “PPP” (Plummeting Pussy Power) and the hoochie now realizes that she has boxed herself into a corner and her options to coming out of this doomed lifestyle are literally ZERO!

Now you have an example like an Angel Adams who are like so many delusional women who actually think that someone else is responsible for subsidizing a life void of accountability that seemed to last forever with one hedonistic indulge enjoyed after another.

They’ve never work before. They don’t know how to write, read or communicate. They have no people skills outside of the small inner circle of ghetto ignorance and they haven’t a clue as to how to present themselves in a professional manner because they never knew that there was even a world that existed outside of the ‘hood!

The working class will no longer tolerate taking care of you because even THEY have it hard with this burdened economy. Hell! Even WE would like to get a handout but CAN’T because we don’t qualify because we make too much money taking care of your dumb ass all of these years by contributing to your sad state of affairs by having money taken out of OUR checks!

The checks that we had to work hard for while you laid up making baby after baby while we had to wake up at the crack of dawn to get that money as you slept after a night of freakish sex.

Heck! I wouldn’t mind having a freakish night of hot juicy organ draining sex just like the rest the working class but we are just too tired to do anything except come home after a hard day’s work and crash in the bed!

Correction: Must have BEEN nice!

Why do I say that? Well the handwriting is on the wall and the days of playing the system are now over. It’s a silent victory for those of us who have had to toil for what little that we have and we ain’t crying for the Angel Adams of the world one bit!

It all boils down to the fact that if you PLAY you PAY!

I know I won’t be sitting up on national television on a stage with an Angel Adams type while Maury Povich screams out: “Scurv, you ARE the Father!”

…….I bring my money home and ain’t no hoochie getting what I’ve worked so hard for!

Previous : OFTENTIMES THE STEPFATHER IS WELCOMED INTO THE NEW FAMILY ONLY TO UNKNOWINGLY CLEAN UP ANOTHER MAN’S MESS!
Next : Total Damnation & The End Of The Road For Spermin’ Herman, But Forgiveness & A Blooming Campaign For Freaky Newt!

Humankind is lost in an illusion your sole purpose on this earth is to propagate the species not to develop a portfolio. God didn’t tell Adam and Eve to go forth and create individual wealth. We are animals even if we personally don’t want to admit it. Our purpose is to breed just as all other animals. The social responsibility and financial aspects are born out of fear of loss. With that said, 3 daddy’s should be responsible with both raising and supporting these children, having children is what the female of a species is designed to do. I’ve been to countries were the people couldn’t afford shoes but they had plenty of children because there is strength in numbers and the more kids you have the better chance that one may eventually escape the legacy of poverty. We complain about our tax dollars helping kids in poverty and it’s really not that much money when compared to the billions we waste on weapons of war that don’t work. Stop wasting your energy thinking negatively about each other and try to constructively find solutions for helping one another. We all make poor decisions and often repeat them, so look at your own life before judging.