Being whipped is the best feeling in the world for as long as it lasts!

Now what do I mean by being whipped?

Well, I’m damn sure not talking about S & M. And for you folks out here who really don’t know what that is, I rest assure you that it’s not that old bar downtown that you drive by every now and again and it’s surely not some new wholesale outlet like Sam’s, Costco or BJ’s. BJ’s? Dang! That one sounds like a sex club for swingers or something! LOL!

But S & M is short for Sado-Masochism, and it involves lots of whips and chains if you know what I mean. and I don’t think that there are too many Black men who want to be tied up and whipped with the history that we have in this country up to the present day in being tied down to these plantation-like jobs and overall tension in the atmosphere! LOL!

Usually this euphoric feeling is followed by that inevitable face to face with a strong dose of reality but by God while it lasts there’s NOTHING on the face of this green Earth that could ever compare! 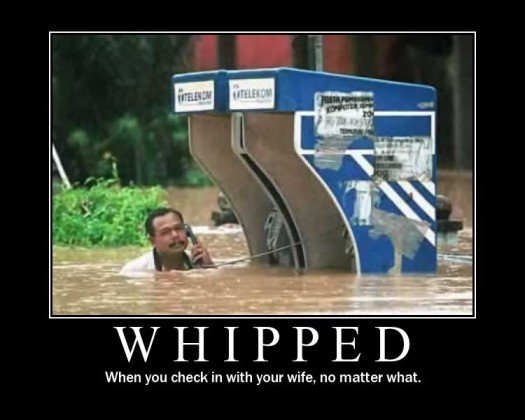 Boy kisses girl and discovers those once elusive joys that he only could have fantasized about.

Boy gets possessive over girl because he thinks that she is the sole possessor of that sweet pungent hairy moist orifice that is driving him bat-shit crazy.

But girl dumps boy for another guy and boy is crushed.

Allow a little time to go by and repeat the cycle as the crushed boy meets yet another girl who does that secret freakishness even better!

This cycle can happen in a man’s life over and over again until old age yet he never figured out what it was that drove him crazy!

I’m not going to lie, but I’ve been through a few of these mesmerizing cycles and I have to say that if I wasn’t a thinking man, I would probably still be on that merry-go-round looking for that next hit of being whipped but I knew that there was something more to this phenomenon than meets the eye.

While it’s so sad, some men spend their entire lifetimes searching for that previously experienced ultra high but never really quite getting there and when they do it is so hard to capture it in a bottle for safekeeping or a rainy day much like those Thanksgiving Day leftovers that you can take home with you and enjoy on another night later on in the week.

Being pussy-whipped is not like that for most men. Now I’m talking about the men now, I’m speaking of those men who used to be that boy but got tired of repeating the phase all over again and wanted to “capture” that one magic pussy all for himself.

Now to the ladies that are reading this off the chain blog of mine here, PLEASE understand that I do personally know that you have so much more to offer than your Golden Vagina but for the sake of a good laugh, light-heartedness and comedy, I am writing it in this manner so don’t leave those nasty e-mails in my inbox telling me that you thought so much MORE than me……. I mean after all, we ARE adults here aren’t we?

But back on to the topic at hand…….

There are just too many men whom think in this manner though, they see women as objects of pleasure to be collected as their own personal playthings, toys that no one else is supposed to even think about looking at.

I remember late one night when I used to work at the county on the overnight shift thinking how so many of the guys who were locked up did so because of their need to either impress a woman or to get the image that would impress many women from a distance.

They wanted the swag, the style, the look that would intrigue women by the bundles and this is why they felt that by selling drugs to have more money or by being that bad boy would do the trick but oh how they found out the hard way. They may have found out that their friend was trying to bed down their girlfriend and ended up beating down or murdering that guy over a woman, this happens so much more than you could ever imagine.

Directly or indirectly, it was always about securing that feeling that could only come from a woman.

Why do young men have a need to have a car that has all of the amenities all the way down from the sound system, the rims, the leather and every possible feature that would comfort a person beyond measure?

It’s because they are out to get the girls!

This mindset is not merely manifested in the pursuit of a car, it can come through any achievement in life depending on the pedigree of the individuals involved or the area of expertise pursued.

If a man is a well schooled gentleman with several degrees of higher learning then he will use his education to impress a woman of knowledge. He won’t go after a hoochie mama because she won’t have the appreciation for what he actually accomplished. This will show you that “pussy” ain’t just “pussy” because for you to be pursued by a man he will have to at least feel he has a shot at garnering your attention because no man wants to be rejected.

But to see all of the hoops that men will jump through to get that feeling really shows you how intense a scenario it must have been when they were truly turned out.

The main thing that I want my sisters to be aware of is how the men that approach them view them. Some men will tell you just about anything to get you caught up in their web of deceit for a time to use you up for their hidden agenda. This is not all men now but far too many.

Any man that is all about being genuine with nothing to hide doesn’t flinch when he finds out that he will be put to the test. The problem is when some women feel as though they have a catch in a no good man and break all of their previous rules in order to secure something that they will never ever have in the first place anyway. Because these types of men are not about having a committed relationship but merely satisfy that feeling that they have chased around in life ever since they first had it.

With men like this you are an object, he will dress you up to meet the standard of his ideal while you think that he is getting off on what you are doing or how you appear to him when in reality you are reaching for a standard that has been well defined in his subconscious mind where anyone who is willing to play the game with him will suffice. You will be tossed aside like a well used tissue after a good nose blowing when  he finds another puppet who fits the bill of what he wants ever closer than you do.

How does this all tie into being pussy whipped by a woman? Well, the ideal will be to do the whipping at first in his life but the realistic plan is to find out all that is in his mind so that you can understand all that makes him tick.

Is he a person who has the mentality of a ruthless player looking solely for a replay of that elusive adolescent sexual experience?

Or is he a balanced individual who, while having experienced a few adventurous and uncharacteristic escapades in his younger days knows the difference between a lust driven motivation and one based on wholesome living and has waited patiently for that one person to cherish in their life.

I hate to say it like this but most experienced ladies of the evening – who are not the straight out street walker variety – understand this concept wholeheartedly. It’s not always sex that a man is seeking when he takes the time to spend time with a hooker or a so called side piece. To know a man and all of the sum of his parts takes time and patience to do so, but it is well worth the effort if you plan on keeping him for life…….but refusing to do so only invites disaster down the road. 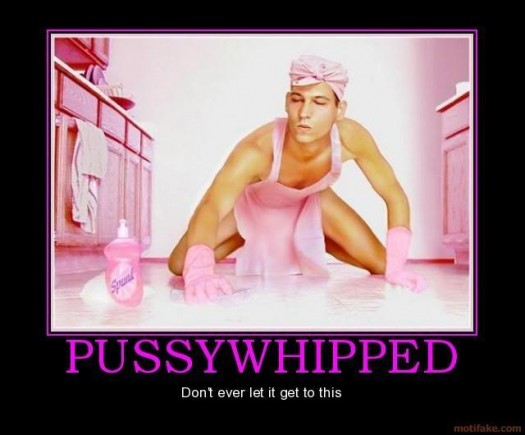 So being whipped is the most wonderful feeling when it’s with the right God given designated person for you. When we “dip and dab” into the strange sexual energies of those who were never meant to be connected to us in such a manner, we inadvertently “throw ourselves off” to the point where with some of us we can never come back!

Certain things we are to simply leave alone because when we find ourselves pleasurably entangled in the sweet sexual web of someone, we oftentimes are tying our own selves up in a knot that keeps us from progressing in many other facets of our life all because of that invisible soul tie. WOW! Trust me, that is an entirely whole different article! But to get a taste of where that can go, just read Sexually Transmitted Demons and tell me what you think!

P.S: Scroll down to enjoy what I think are two of the top greatest pussy whipped song anthems ever made! LOL! Leave your comments below and let me know what you think! Denroy Morgan evidently ran across a freak who turned him out but Roy Orbison REALLY got it bad ’cause I can tell that he is the type that will KILL over his woman!

Previous : The Sandy Hook Tragedy Is Nothing More Than Business As Usual In The ‘Hood!
Next : The LanceScurv All Night Off The Chain After Party # 27

All that you wrote and you ain’t saying shit!