Ever since the killing of Michael Brown in Ferguson Missouri by Police Officer Darren Wilson, the response by the people of that community according to some was either out of line and to others long overdue.

This preexisting tensions of Ferguson Missouri between the Police and young Black youth as well as the racial tensions set the stage for this unfortunate incident to explode as it has.

Tonight we want to give a forum for all to express their opinions no matter what end of the spectrum that they are on in commenting about how the Blacks of Ferguson and beyond react to incidents such as this.

Tonight at ScurvMedia Studios we will have a special guest in Mr. Ezell Harris, The Director Of Floridians Monitoring Law Enforcement (FMLE) and he expresses his viewpoints on what really went down in Ferguson Missouri and the bigger collective issues that our communities need to put their energies into. 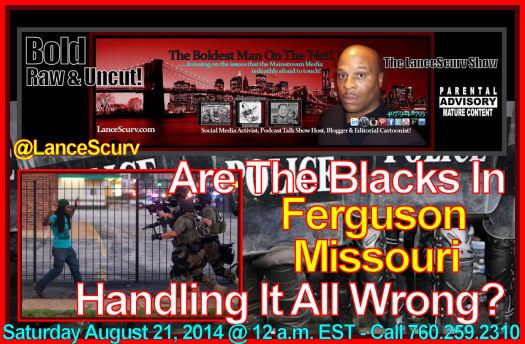