Hank Aaron hit number 715 out of 755 career steroid free home runs when this couple first made it big…….

President Nixon was still in office when the world first sung their joyous songs…….

The ribbon cutting for the opening of the World Trade Center has just happened the year before this duo was thrust into the entertainment spotlight…….

…….and Muhammad Ali was about to regain his World Heavyweight Boxing Championship while their music ruled the charts…….

Who else but The Captain & Tennille! 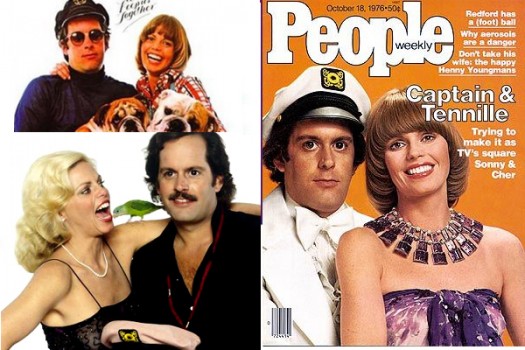 I couldn’t believe it when I heard that the Captain & Tennille, that dynamic singing husband and wife duo that rose to prominence back in the seventies after being discovered by Neil Sedaka when I just broke into the two digit age bracket, filed for divorce for reasons even the Captain hasn’t a clue on.

Yes, he doesn’t know why at this point because it was Tennille who filed the papers and they live under the same roof!

The Captain – named Daryl Dragon – is  71 years old now and has been diagnosed with Parkinson’s disease, and many have speculated if that was the reason for her being motivated to doing so or maybe the health coverage that he will receive if she did so would be even better if he was a single man.

But if the latter was true I would have to say that it’s a damn shame if it was because that merely tells me that the United States Of America is through!

The divorce papers were filed in Arizona and it claimed that their marriage was “irretrievably broken.”

I mean, we all have our reasons for going through changes but if these two icons have to go through these changes in their golden years after giving the world so much of themselves to help create an awesome backdrop to our personal memories down through the years, then it is proof positive that something is wrong with this system as it is.

And what if that wasn’t the reason and they are just not getting along? Well the first thought that hit me when I considered that scenario is that it’s a bit too late in the game to start thinking about going out into the world to start anew after being together for so long.

To be honest with you, when two people have been together that long, they are absolutely NO GOOD without each other and will shorted their lifespans a great degree if they were to attempt to live apart from each other.

That’s the honest to God truth!

So a great part of me – even though it IS still a very sad situation – would rather it’s all about better health benefits for the Captain because over the years those were two very loving people whose affection for each other washed over the world for the time you would sit back and absorb their television show.

I know one thing, I never missed an episode and it always left me happy whether it was from one of their songs or the hour long show. This sad news definitely hurt me because I grew up on their music like so many that I know.

Let’s root for them as a couple as I hope that love really does keep them together.

In a day and time when relationships are formed and discarded faster than a full revolution of a Merry-Go-Round in an amusement park, the Captain and Tennille have been those entertainment icons who you just KNEW would stay together until death do them part.

Who else do we have to look up to these days as relationship longevity is becoming an oddity no matter what sphere of excellence you search. This definitely shows that the evil forces that lurk and move about the earth are definitely on the warpath to destroy all righteous institutions with marriage being the prime target on that list.

Divorce after all of these decades?

Say it ain’t so Captain & Tennille!

The Muskrat Love has to live on and Captain, you have make every single effort to keep it going even if you “Do That To Her One More Time!

Let’s pray that they work it out people, life is too short to live your golden years all alone with nothing but some distant faded memories.

Leave your passionate comments below…….