When meh foot touch down in a foreign soil for the first time from meh dear beautiful island of Jamaica, meh could NOT believe the filt’ meh see here wit’ meh own two hi!

The drugs, the drinking, the crime,  the rude kids who are lazy and don’t know a ting about respect or the responsibilty of house chores…..dat’s why these young gyals don’t know a TING ’bout how to run a home or keep a man!

I remember when for years meh have to git up early in deh marnin’ to wok two mile to fetch water from deh well….then after preparing breakfast, cleaning up our room and having marnin’ worship, we must get ready for school and the eight mile walk that went along wit’ it! So by deh time we made it to school, it must have been 6:30!!!!! And you better not be late! You better have every crease in your school uniform sharp wit’ a belt to hold your pants up! Your clothes MUST be clean! And you better have your hair combed nicely and your face washed CLEAN wit’ NO mouth water drippin or yampy ‘pon your eye! If you forget you will quickly be reminded ’cause dey teacher dem will PADDLE ya’ BOCKSIDE in school and you will get it AGAIN when you get home!

Dat is why these young gyals don’t know a TING ’bout how to run a home or keep a man when dem get holder! Dem want to wake up to collect a welfare check every month! Deh no good men dem want to find a hard working woman to lay up on and use while dem screw down half of deh neighborhood and make babies while YOU are working TWO JOBS!

My Lawd says in his word dat a LAZY MON SHALL NOT EAT! And if you feed him, you are just as much of a sinner!

You are better off buying one of those rubber p-e-n-i-s-e-s dat dem sell here in a deh sex stores dem. Me nah really bother wit’ dem tings but if meh had to deal wit’ a lazy mon like dem here in the states, I would be better off wit’ one of those or a cucumber in a MY bedroom ’cause there would be NO DRAMA!!!

Meh go went down to this church this past weekend with a friend of my auntie, and after being there for two minute meh KNOW I could NOT hever join dat nasty place. Dem have a BAATY BOI directing the choir! A sodomite buggerism baaty hole mon! IN THE CHURCH!….CHA! You had to see dat man switch up and down ‘pon deh aisle like a blinkin’ woman and everyone acted like it was alright! What kind of spirit is DAT?

No one said a ting!

What kind of warrior for the Dear Lord can we be when we cyan’t even correct the behavior of someone who is out of order in the church? And to add insult to injury, they give this sinful transgressor of the Holy Word a big position in the church, so in other words, it’s alright to carry on with deh sickness him have!

Not where I come from!

If you are into dem kind of practices you better not make NO ONE find out! If we find out dat you are going on with f-a-g-g-o-t-i-s-m in our parrish, we will stone you to death! And deh police won’t say not a ting!

You will NOT live to long in Jamaica with that on your mind.

So your best bet is to go to Montego Bay and hang out with the tourists…..cause all you find there is the curious freaky white women looking for some dread mon to take back to their hotel room with them for a good stiff Black buddy or some white mon lookin’ for some drugs and likkle young bwoys to play wit’ or prostitutes. That’s what dem do when dem come to Jamaica and dem same wicked nasty a*s people come and try to act so high and mighty over you when they are here in the states and back in their big positions as your boss in these jobs!

God is perfect and don’t mek NO MISTAKE! Meh see deh baaty mon dem pon deh TV talk ’bout God is love and dat is why deh two men dem are going to get married! How is God going to say dat it is an abomination for a mon to sleep wit’ a mon and then accept this nasty filth? God’s word never comes back invalid no matter HOW DEM TRY to twist up His commandments! And any Pastor dem dat want to perform a wicked transgression like gay marriage has a special place in the pits of hell waiting for dem too!

God will kill them all and that is WHY this Babylon called the United States will continue to go to hell. These weak watered down hypocrite Christians who are the biggest pork eaters are not the chosen people with the ways they have! I tell you this, I will never go back to that nasty place ever again! I am not trying to court the devil!

A very colorful and fearless Annette Powell, 41, Tivoli Gardens, Jamaica West Indies, An outspoken fearless Jamaican woman who like so many others before her, was traumatized by what she witnessed  in her first and last visit to the United States. 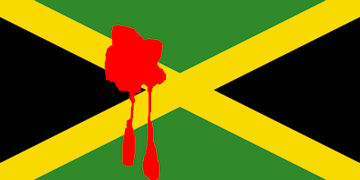