While I received a few e-mails asking if I’ve become some kind of Pro-Gay activist after my promotion for our BlogTalk Radio show this Friday (5/31/2013 @ 10 p.m. EST, Call 760.259.2310 at show time or click http://ht.ly/lx0t9 to listen by computer/smartphone) on the senseless killing of Mark Carson, the answer is no, what I am is a HUMAN activist and do not want to see ANYONE murdered.

Now the Gay rights issues are pertinent to me since any violence toward any member of the LGBTQ community falls under the umbrella of what I am all about as a child of God.

Too many people spring into action to use these tragic events to argue if that particular preference is right or wrong when in fact they should be seeking justice for that lost human being and also look to offer their comfort to the family/families involved because the pain of a Mother or a Father is no less because their child was Gay or Lesbian.

Come one people, let God do the judging here! And yes, many have asked me what my personal feelings were on the lifestyle and I have stated it and it hasn’t changed, but my love for all humans will never diminish one iota merely because of my belief to the letter of the law in God’s word.

That being said, I always love to look a little deeper into a situation at the root to see if I can discover the reason why things have happened the way that they do. The murder of Mark Carson at the hands of Elliot Morales is no different as I have my theory about what set this crazed animal off to do what he did in the first place.

First let me say that I have a personal connection to this story in a lukewarm way because I used to love walking the streets with friends in Greenwich Village until the sun came up or damn near that time.

The very spot where Mark Carson was killed was a place that I’ve passed through many a day and night laughing with friends and meeting new female companions who would explore the shops, stores and boutiques with us in a spontaneous random manner.

For me, those were the good old days and I don’t think that they will ever return to the former glamor that I’ve known the streets of Greenwich Village to possess. In all of my years hanging out down there I’ve never been hit on by any man and was never made to feel out of place because I was obviously straight.

Let me also say that at the time I was a competitive bodybuilder and aside from the stares of appreciation from plenty of men and women sprinkled with an undetectable amount of lust under the radar, those who were apparently Gay have always extended a respectful hand to me even in the place that was unofficially “their” part of the city to be free and be who they are.

Why can’t many of us who are straight reciprocate in the same manner this kind of civility?

You don’t have to have the same belief but keep all confrontational episodes to yourself. Confrontation dulls the blade that should cut through the real trials and tribulations of this life effortlessly because of our sensitivity and understanding to all things around us.

It’s only when we dull that blade that we make things harder on ourselves because of the gross ignorance that hinders our understanding from becoming sharper as we blow an opportunity for major growth.

This keeps us in a stagnant place in our lives and causes us to become stale with the ever increasing stench of stupidity and hate as well as ALL of the “ANTI” fruits of the spirit which are diametrically opposed to all of the divine qualities that God wants us to exude to one another as His children.

So as I reminisced on the happy days that I spent growing up in New York City’s Greenwich Village I couldn’t help but think to myself how much that could have been me gunned down merely because I was in the wrong place at the wrong time. You see, everybody who hangs out in “The Village” is not Gay, I wasn’t and yet I loved it there.

Maybe I could have been mistakenly gunned down because of the twisted perceptions of one who had major issues. So the question looms – why should we all have to restrain the enjoyment of our lives merely because of the deadly phobias of another?

In a perfect world we shouldn’t, but since we know that this world isn’t prefect by a long shot, we will have to live a little less carefree than many who are presently in my age group remember in abundance from “back in the day.”

I believe for a man or subhuman like Elliot Morales to carry out the senseless act of taking Mark Carson’s life that HE had to have some underlying issues within himself. Maybe there were some desires that he was fighting against that he couldn’t face. Maybe this was HIS way of fighting back at those desires and cravings and unfortunately Mark Carson became the random “face” of it all and was an easy target to attack.

I’ve learned from experience that this is how it’s played out on less drastic terms. It happens on our jobs. It happens in our streets and within our very families. Many men have a huge issue with being around Gay men because they are scared that they will fall into something that they have been fantasizing about and struggling with for a long time.

As a straight man I can see this in many men around me growing up who had internal issues going on with their sexuality.

I had no hang-ups growing up around Gays because I am secure in who I am and never had any confrontations with those who feel that their life was happier living the way that they were.

Me? I loved the Village even more so back in those days because honestly there was more pussy for me to choose from! LOL!

Unless a woman wasn’t digging men and preferred munching on the same thing that I enjoyed then my chances for finding someone to hang out with for that evening were greatly increased. But to be honest even the Lesbian chicks that I met down there loved me too because with me it wasn’t all about getting in their panties, it was a positive energy thing! I got along with everyone but if a lady was “feeling me” and it was time to call it a night well we may have taken the festivities elsewhere and away from prying eyes unless she happened to be an exhibitionist. LOL! Details at 11 y’all! NOT in this article!

But back to my point, I believe that Elliot Morales struggled with a past scenario that fell under the umbrella of Gay activity and loved it or he secretly fought himself from pursuing his desires by projecting violently on those who were COMFORTABLE with being who they felt they were in a peaceful manner.

There is more to this story than meets the eye because if I were a man who was dead set against all things LGBTQ, then why would I find myself in a place where they can be free to be “OUT” in the way that pleases them the most?

Something is definitely fishy about Elliot Morales. 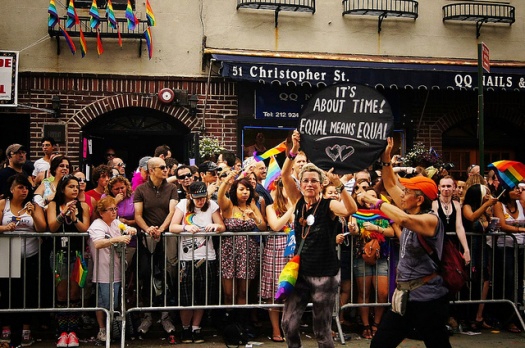 As an ex-con who is guaranteed another long and possibly (and hopefully) membership in the world of lockdown, he knows for sure what he feels inside while in the company of other men sharing the showers with them naked. So now I’m leaning toward the thinking that he subconsciously committed the act purposely so he would have no other choice than to have an excuse to either suck a dick for the rest of his life as well as taking a few up the ass on a regular basis using the excuse that he is not Gay but doing this as an only option to pass the years away.

But on the flip side I KNOW what it is like to be attacked for my heterosexuality by men who are married but closeted in their desires because I am comfortable in who I am as a straight man. Look, I have no problem with what anyone does as long as it doesn’t stop my personal pursuit of life, liberty and happiness.

So face whatever it is that you have lurking deep within yourself and come to terms with it because YOU are the one who has to carry the burden of it for your entire life and it is a damn shame when those who are like this force another to die and their families feel pain forever because you were too cowardly to face yours!

We have homelessness, poverty, health care issues, an illegal drug epidemic, deadly S.T.D.’s and a whole laundry list of issues in this society that affect us ALL! We have no time for killing people who live differently merely because we can’t face the same thing that secretly resides within ourselves.

Live and let live because we are ALL God’s children. If only Elliot Morales had understood this then that night for Mark Carson would have been another memorable and happy memory added on to the many he already had on a perfect Greenwich Village night.

This could have never happened in the Greenwich Village that I know. Why can’t we go back to those golden years?

Previous : Are The Mark Carson /LGBTQ Hate Crimes Becoming The Norm? – The LanceScurv Show
Next : Late Nights with LanceScurv # 46