Why isn’t anyone inquiring about what role Nick Gordon played in the deaths of both Whitney Houston and her daughter Bobbi Kristina Brown?

He was present at the time of both of their deaths and they died in an eerily similar fashion.

Any detective worth his weight in donuts could figure out that there simply had to be a connection between the two deaths with him being a suspect simply because of his proximity to both.

So why is he not detained and questioned as a person of interest?

Is Nick Gordon on the payroll of Clive Davis?

If there is an Illuminati then somebody has to do the dirty work now don’t they?

Since Nick and Bobbi did drugs together with her obviously footing the bill to get the goodies, then it shouldn’t be so hard to get him to name his price as a heroin addict to carry out these two very public blood sacrifices.

It will be very interesting to see how this sad saga will play out!

Please leave your opinions, perspectives and viewpoints in the comment area below and let us begin a very necessary dialogue on this topic. 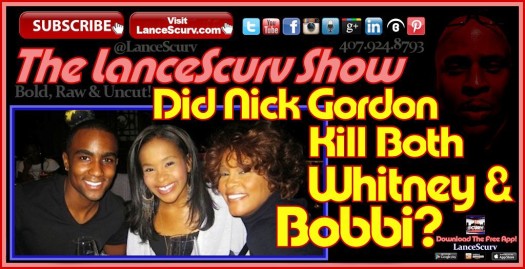 I think Nock Gordon did have a had in both deaths.

I am bigger fans, believe Nick G. did

I think that these things have to be investigated I feel something very
evil went down here,
whitneys death and now Bobbie something very wrong

yes he did boths of them god blessing familys with love

He didnt kill whitney that was a pure illuminati whack job down to the
numerology was on key her age the day even her hotel number that was a
clean illuminati hit
BK? It was sloppy not a whack job he prob beat her so bad he wanted to make
it look like a suicide BK never took a bath she was afraid of tubs im sure
he beat her bad and filled that tub up and put her head under then panicked
took her out and now 6 months later she will pass he is scum look at his
face hes evil as shit pat houston is happy money goes to them but nick
killed her im sure

Yes, just the fact they both died in the exact same way and Nick Gordon was there both times. Not to mention Bobbi Kristina had almost drowned in the bathtub the day before her mother was found dead and he was also there for that. In fact he called the hotel’s security to get them to help him get her out of the bathtub which he probably put BK in there hoping she would drown then, but she didn’t. I think his plan was to kill them both not necessarily in any order so he could control the one and get his hands on Whitney’s money. He’s a whack job for sure.

Coincidences like this don’t happen. so why isn’t both incidences being
opened back up and investigated?

Your thoughts are the same as mine. I am not a lawyer but Nick is guilty. I
believe he will try to kill himself when the heat gets too hot. I believe
he killed both Whitney and Bobbi Kristina. I HOPE HE HANGS – BY THE BALLS.

Oh I definitely believe that simple ass nick Gordon had something to do
with both Whitney and Bobbi Christina’s drowning. I think he’s so freaking
delusional that probably snuffing out the two of them in the same exact
manor would be a big payday of Whitney and Bobbi Christina’s money. That
damn fool is a cold junkie/drug addict. And when I seen him on Dr. Phil
show a few weeks ago, I was totally convinced nick Gordon is guilty of
something horiffic.

Need to be investigated lie detector.test something about that nick reminds me of a crazy person

He placed himself at Whitneys death scene, he was also present when Bobbi K
was found 24 hours before her mother died, supposedly fallen sleep in a
BATH TUB!
http://www.nowmagazine.co.uk/celebrity-news/534072/bobbi-kristina-brown-almost-drowned-in-bath-just-24-hours-before-mum-whitney-houston-found-dead

Now 3 years later, shes dead like her mom, and her comes Nick with some
faulty CPR skills Im sure hes never been to a class to become certified to
do

fowl play in both women, they were murdered truth will come out

When it ALL comes downs to this case, THE White secret society is killing Bobbi Kristina . Do you all see these white jewish guys now surrounds this Bobbi Kristina case?

Nick never shedded a tear on the Dr. Phil show.He fake cried and acted like an idiot.Somebody need to check out the friend Maxwell Lomas who was there and supposedly took her out of the tub.He could be Nick’s boyfriend/lover.

I think the Houston murder Whitney and Nick copy and did Bobbi K !

My gut tells me Nick Gordon did it! Took out Whitney Houston and her daughter. Would they please give him a lie detector test already.

NICK HAS NOTHING TO GAIN IF MONEY IS THE ISSUE,AUNTIE PAT LOSE IF KESSIE LIVES

Me. I am WhitneyHouston Eternal love fan♥

Yes i believe so. I don’t have time right now to state the reasons that I suspect this theory , but will come back later. Also I’m pretty sure lomas was supplying Whitney with certain drugs aswell as BK. .

I think Nick Gordon is suspect and should be investigated. As a matter of fact, I’m looking at a CNN video on the sidebar here asking the question: “Who is Nick Gordon?” Nothing good can ever come out of anyone being a heroin addict like Nick Gordon and this sad and hurtful tragedy is case in point. Godspeed to Bobbi Kristina and well wishes to all of her family and truest of friends.

I had a gut feeling he killed and then staged both to make it look like a drowning! I hope it comes to light. Just make me sick.

Yes I believe he did kill whitney! Something is not right with Nick and I believe Whitney was fooled by this little brat. He murdered Whitney thinking she put him in her will but once he found out that she didn’t he planned to then murder Krissy. He waited three years to strike again. I hope his plan failed. I pray Krissi doesn’t have a will because she would have probably put Nick down as her beneficiary.

Like your video by the way, too short tho 🙂

I have ill feelings of this Nick Gordon character, something isn’t right, I picked up on it a long time ago when the Houston’s did they’re reality show. I believe there is a lot more to this story then we know, and I’m pretty positive Bobby Brown knows alot about that incident. I don’t blame Bobby at all for not letting that boy around his daughter. He and the police knows something.

Who’s gonna do the investigation? This is bigger than many know and want to admit.