My name is Dr. Ramona Brockett, the research that I will discuss on this episode of The LanceScurv Show comes from my dissertation where I used secondary data from the NCCD archives of the University of Michigan and ran a logistic regression to determine African American (AA) and European American (EA) perceptions of police aggression.

The most important findings were these:

(1) AA’s in the upper glass approved of police aggression at a lower rate than lower class EA’s;

A second topic we need to explore is my Conceptual Incarceration Theory.  This theory looks at the 13th Amendment and I contend that inherent within the wording of the 13Th Amendment, the AA is reinslaved upon incarceration.  Thus, the reason why black life is devalued–we are not considered human.  Thus, Garner etc., could easily be killed.

I sincerely look forward to your presence and participation on our show Friday evening! 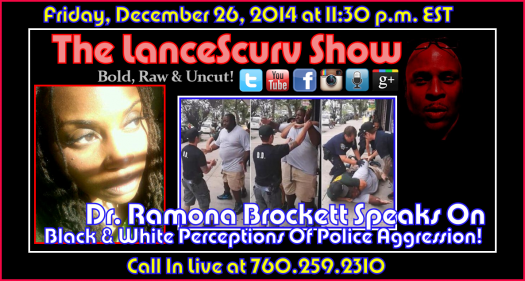 Dr. Ramona Brockett is one of 4 African American Women in America who holds both a Juris Doctor and a Ph.D. specifically in the area of Criminal Justice. Dr. Brockett earned her Juris Doctor from Boston College Law School in Newton Centre, Massachusetts in 1989, and her Ph.D. from Rutgers University School of Criminal Justice in Newark, New Jersey, 1998.
On the national and international level, Dr. Brockett has served as an editor and on several editorial boards including:
The Journal of Prisoners on Prisons, The Journal of Contemporary Criminal Justice , A Critical Journal of Crime, Law and Society, and The Journal of Ethnicity and Crime .
Dr. Brockett is known for her theory, Conceptual Incarceration, where she explores the re-enslavement of the African in America upon incarceration through the auspices of the 13th Amendment; and, the Coca Cola Bottle Theory where she examines the changing role of the Constitution from 1864 to the present stating it looks like a Coca Cola bottle.

Dr. Brockett has also served nationally and internationally in the professional Criminal Justice organizations as National Executive Counselor, Minorities and Women Section, Academy of Criminal Justice Scientists, 2004-2008; National Executive Counselor, Division of People of Color and Crime, American Society of Criminologists, 2003–2005; and National Vice Chair, Division of People of Color and Crime, American Society of Criminologists, 2000–2002.
A widely published professor, she is presently finishing two manuscripts including Civil Liberties and the Changing 21st Century Criminal Justice System , and she along with Dr. Renita Seabrook are finishing their book entitled, Women, Crime and Justice: A Global Perspective. Dr. Brockett is the 2006 recipient of the National Evelyn Gilbert Unsung Hero Award given by the Women and Minorities Section of the Academy of Criminal Justice Scientists.
Presently, Dr. Brockett serves on the faculty at Laureate University, and Walden University, an online international university, where she mentors PhD’s in the Graduate School of Public Policy and Administration. Dr. Brockett was formerly a tenured professor at the University of Maryland. Please visit her blogspot @ drramonabrockett.blogspot.com to read her Justice, Equality and Redemption Blog and see what radio, television and speaking engagements for which she is presently being booked.
————————————————————————————————————————-
Time: Friday December 26, 2014 @ 11:30 p.m. Eastern Standard Time
Place: The LanceScurv Show <—–Click here at showtime to hear the entire program live on your computer or smartphone!
Call In Number: 760-259-2310 – Call in to listen or join in with your opinions on the discussion. You DO NOT need a computer to participate in the show, all you need is your phone.Anonymously Call The LanceScurv Hotline to share your stories and opinions on the show topic at 407.590.0755 – 24 hours a day, seven days a week!If you have any issues getting to the show, feel free to call me on my personal cell ( 407-924.8793) and I will get you squared away with any problems that you might have!Also, the entire program will be uploaded to my YouTube channel (YouTube.com/LanceScurv) the very next day for your listening convenience just in case you’ve missed it.