Isn’t having a video camera such a wonderful thing?

It has equalized the playing field of the world’s rights and wrongs.

Anyone can get caught doing or saying anything that they are truly guilty of with just the click of a button and a free Youtube account. The worse part is for the culprits of moral misjudgment is that the video cameras these days is not ONLY are the cameras getting smaller, but they are usually included on most cellphones these days also!

So now EVERYONE is the paparazzi!

You don’t have to be a professional photographer free lancing for a high profile magazine or newspaper anymore to snatch your piece of fame for being in the right place at the right time. No! Just have your camera phone or mini camcorder ready and the whole entire world is yours to police.

So now wouldn’t you think that most of us would have the damn sense to be on our best behavior?

Many of us haven’t allowed the one simple fact of living in a technologically advanced world to sink in our heads, I don’t understand, maybe it’s because the world has changed so swiftly or maybe it’s that we are truly just getting old.

As I navigate through my daily routine out and about. I “notice” the little things that people do that could really destroy their personal “worlds.”

About a week ago while coming out of the Lowes Home Improvement Center I noticed a car that pulled up into a parking spot, after sitting there for a moment the driver never got out. Well what might be so strange with that you say? Most people try to park as close to the front entrance as possible to make the walk into the establishment a very short one. This car was out to the edge of the parking lot up under a tree. Hmmmmm! Nothing especially unusual, maybe the driver pulled over to make a call on their cellphone or to rest a little after some long distance driving. Maybe.

But my hunch on something fishy going on was validated when yet another vehicle drove straight across the parking lot in a direct line toward our previously parked car only to pull up next to it ever so closely in a manner that let me know that this was definitely a prearranged rendezvous. Were my assumptions correct? I’d have to say so. Because immediately after our new guest to the Lowes parking lot finished taxiing their car to their satisfaction out came the female driver draped in a very scantily clad style only to swiftly usher herself to the already opened door of the original vehicle that I must add had some very darkly tinted windows as an amenity to insure that the activities indulged in were kept private.

It seemed as though this was the case.

What a sloppy way of doing things. But, this is the way of the world and since I guess that they were not celebrities or a person of interest, they maybe felt anonymous but dang, some people are just TOO CARELESS for their own good because with my Youtube account and the camcorder in my pocket that travels with me EVERYWHERE, I could have really caused some friction in their world but as you all know, I am NOT that type of guy. I’ve got better things to do with my time!

That being said, I am quite sure many of you have heard of the furor going on over the ugly comments made by provocative fashion designer John Galliano a few days ago last Thursday the 24th (2011) when he was caught spewing some anti-semitic rhetoric at a couple in a Parisian cafe, he was detained on that incident and shortly afterward a video surfaced of Galliano doing the same thing! He was obviously drunk or intoxicated but this was no excuse for his actions as I feel personally that alcohol is merely an amplifier to what is already on the inside of you anyway. I feel that alcohol doesn’t MAKE you do something that is not inside of you but it brings OUT what is already there hidden away deep down inside.

In the video he ranted on about Jews and said that “I love Hitler” as well as many other vile words spewed.

Immediately afterward Christian Dior fired him for his remarks and many in the fashion world said that they will have absolutely nothing to do with him anymore. Now this knucklehead has a change of heart because I guess he sees how much it will hit him in the pocket. It cracks me up how these famous people will get caught saying hurtful things based on stupidity and only step forward to admit how wrong they were only after getting caught! This makes you wonder if their apologies were sincere or not. Well, not me, I don’t feel it is sincere but only a form of damage control to attempt to “undo” the damage that was done to their careers.

Don Imus did the same thing too with his “Nappy Headed Hos” comment when he spoke of the Rutgers women’s basketball team and also called them “Jigaboos”…….he too had a divine awakening and stepped forward with an apology that was as transparent as a sheet of plastic Saran wrap, yet in time he was back on the air getting paid to do what he has always done. 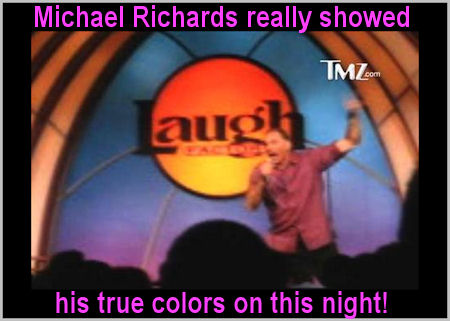 Then we had the Michael Richards (Kramer on Seinfeld) N-word rant, he lost his cool and revealed what he was all about and he claimed right there on stage that he said what he said because he was interrupted! Wow! What a feeling of entitlement to say the least. But as always, he came with an apology that was straight out of someone elses imagination for the purpose of damage control. But why can’t these individuals understand that in this day and time EVERYTHING has the chance of being recorded.

Duane “Dog” Bounty Hunter, went through the same process after getting caught spewing the words that came so naturally to him which indicated the content of his heart without a doubt. He too dominated the airwaves in an annoying fashion with his attempts of damage control because I guess the corporate bigwigs who lurk in the shadows told him that he better get his butt out there and clean up the mess that he made if he wanted to continue on as well as reminding him of the amount of time and money invested in his “amusing at best” television show.

When will they ever learn?

Those of us who have endured a lifetime of these slurs directly through words or indirectly through actions understand that many just can’t help it. No, I don’t mean to make an excuse for them but it is truly a sickness. One that very well may be with us as long as there are human being walking the face of this earth. It’s always been there and is just coming out as much as it is without a doubt because of the advances in technology that allow the world to hear what is usually done under the cover of assumed (Never assume! LOL!) privacy or even boldly on the public comedic stage.

What cracks me up is that this is an issue that shocks many but it is a phenomenon that we who are called the minorities know oh so well. I’ve been told after sharing a few tales of personal racist encounters that I just HAD to be making it up! Imagine that! There are many who are in denial about it but it is only because they know that it exists and can’t face what they have heard all of their lives around the dinner table growing up about “those people.”

We as human beings will always seem to find a way to look for the differences between us instead of seeking to find our common denominators. I mean, how boring would it be if there was only one type of food to eat or one type of music to listen to? Everyone on the face of this earth belongs to a culture that has contributed to the human family something valuable unique and rich. Whether it be in the culinary arena, fashion, music, entertainment, philosophical, architectural or scientific areas of expertise. So our differences are nothing to be rejected or ridiculed, but something special to be preserved and embraced. This is what makes living on this planet so wonderful and makes every single day God blesses you with an adventure to behold!

Now let’s go out tonight and grab some Sushi for dinner after we come from that free Soft Classic Rock Concert by Lake Eola here in downtown Orlando! Are you down for that?

…….and don’t forget to wear that Dashiki that you bought at the Zorafest.