In all my years of following the sport of boxing, I never knew that it would evolve into showcasing the so called exhibitions of pure entertainment that would generate so much money.

What am I speaking about?

I’m speaking about the Floyd Mayweather Jr. vs. Logan Paul exhibition match that’s to be held this on Sunday, June 6, 2021.
There are a lot of conflicting feelings about this since Floyd Mayweather has an undefeated record of fifty wins with no losses. His opponent Logan Paul has a zero win and one loss record.  He never won a fight so here we have two people who are so far apart in their skillset and accomplishments in the sweet science.

Floyd Mayweather won all of his professional bouts and Logan Paul never had his hand raised in victory fight at all. Let that sink in…….

What’s so amazing to me is how this matchup has captivated the minds of the masses to the point where Floyd Mayweather will walk away with a ballpark figure of $100 million for his “pugilistic services.”

There are many who are so captivated that the YouTuber might land a lucky blow to manifest the ultimate real life Rocky story that they are willing to part with their hard earned cash in order to witness what could be a once in a lifetime piece of history no matter if it’s an exhibition or not. The trash talk has been very entertaining but the reality is the only advantage that Logan Paul has is of height, reach and weight. But are these real advantages against a fighter who is known for taking his opponents best weapons and turning it into a major disadvantage.

Many who don’t know boxing but are just cheering Logan Paul on because they want him to win only because Floyd Mayweather will lose if he does. They have no idea that this is a legal bank robbery for Floyd Mayweather Jr. as he will find himself laughing all the way to the bank as he has done countless times before. 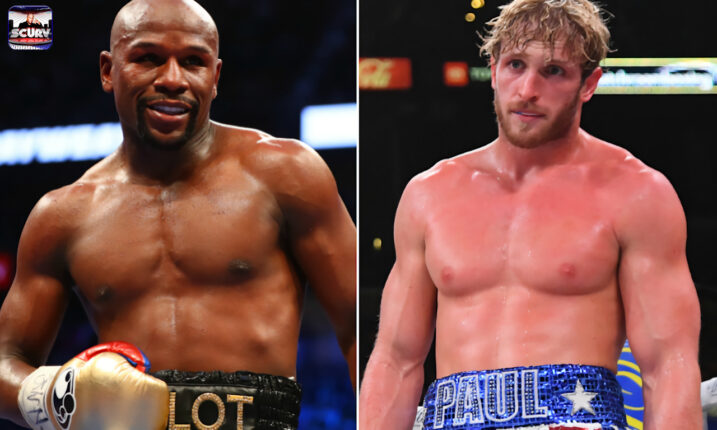 The bottom line is that he is too cocky, too flamboyant, and too confident of going in there to win as he has been for all of the historic fights in his career.

They are hoping that this neophyte to boxing can land a lucky punch even just to knock him down. They know that he has no chance of winning this exhibition about which in actuality is not sanctioned by any of the boxing organizations and has no judges, therefore there will be no one declared to be the winner of this match.

For those of us who are watching it for the expertise and pure skill of Floyd Mayweather, even though he is now 44 years old and long past his prime he is such a defensive wizard that he should have no problem fighting a man who outweighs him by 50 pounds at fight time.

But it’s intriguing to watch such a fight that borders on fantasy not because Logan Paul is a dream fighter, he’s a YouTuber or who is also milking it and laughing all the way to the bank! But if he loses, well Floyd Mayweather beat the YouTuber as expected but if Logan Paul wins it’s a whole different ballgame as the entire planet will then have Logan Paul Mania!

So Floyd Mayweather definitely understands the dynamics of this fight and he’s milking it for all that he can milk it for. The only thing that really bothers me that the fact that Logan Paul
can get such attention and make so much money without ever having won a fight in his entire life. That he can command the huge purses and potential advertising endorsements that other boxers who are legitimate can’t still rubs me the wrong way. It’s a thumb in the nose to those who have fought by the rules and have displayed the discipline necessary to climb the ranks to earn their shot at the title.

This fight is not for any real title and won’t be sanctioned by any organization therefore it’s just a dance in the park and an illusion of a money grab but I’m not mad at anyone. Floyd Mayweather well knows that this social media generation has a blurred perception of what is reality and what is fantasy. He is a gifted enough businessman and entertainer to know how to shrewdly market himself and capitalize on the imagination of the masses who are going to pay for this fight in a very profitable way.

He will also tell you with no shame that this is entertainment he is retired as a professional fighter and he earned the right to do what he wants.
Can you fault your favorite singers who had number one hits decades ago but choose to play in a nondescript “hole in the wall” small Las Vegas venue not looking anywhere like they used to look in their heyday and not performing anywhere near the level that they were known for at their peek.

They have the right to get paid for what they’ve accomplished in the past, and if anybody wants to see them even on this level it gives them a chance to see their favorite star before the inevitable happens to them as with all of us eventually. So who’s to say that we can enjoy ourselves as it’s an event being marketed as entertainment. How many of us go to movies that are chock full of computer generated images that we know are not real but entertains us beyond measure?

The storyline of this fight between Logan Paul and Floyd Mayweather is no different.

The trash talk, the insults, the promises of a win in which no one’s hand will be raised in victory makes for good theater regardless. But if someone gets knocked out surely it will be considered a moral win even though there are no judges.

So take it easy and don’t be so mad that the masses crave entertainment in this coven 19 world that were living in. It’s a chance to escape the confinement of the new society that we live in and a chance to fantasize of a future that will be better just as the past was better no matter how many issues we had in our society.

Although Sylvester Stallone doesn’t make Rocky movies anymore, remember how riveting those movies were although you knew the outcome? But it was entertainment so if you like Rocky movies and don’t like Floyd Mayweather Jr. at this point of his career fighting Logan Paul then you need to check yourself and be fair across the board.

…….and don’t forget, this is not a real sanctioned boxing match for a title.

So don’t take it too seriously, grab you beer, your pizza and whatever you smoke to kick back with your friends and enjoy the show because at the end of the day if it brings people together to make them laugh and to make their adrenaline rush then it’s money well worth spent.