This afternoon I was relaxing and completing the tasks that I set for myself to accomplish today but was dumbfounded when I received a Facebook status that stated a friend of mine was mark “safe” on what I’ll call a Facebook tragic incident page!

Safe? I said to myself, safe from what?

Well at the time that I type these words the facts are now coming forward about the shooting incident at the Fort Lauderdale-Hollywood International Airport, so I won’t even attempt to do what the various news platforms do best but I will share my overall opinion about the times that we are living in.

Let me first say that I do not feel good about anyone being killed nor do I condone anyone killing another innocent human being for absolutely no reason at all especially when their lives weren’t threatened.

BUT……I do find it amusing in the present time that the so called privileged individuals who’ve never known what it was like to live in an environment of terror now see the reality that Black people have had to endure living here under that terrorist in a law enforcement uniform every single day.

Now that you’ve gotten yet another “taste” of the fear that has become a regular item on the mandatory menu of Black life in Amerikkka, I have just one question? 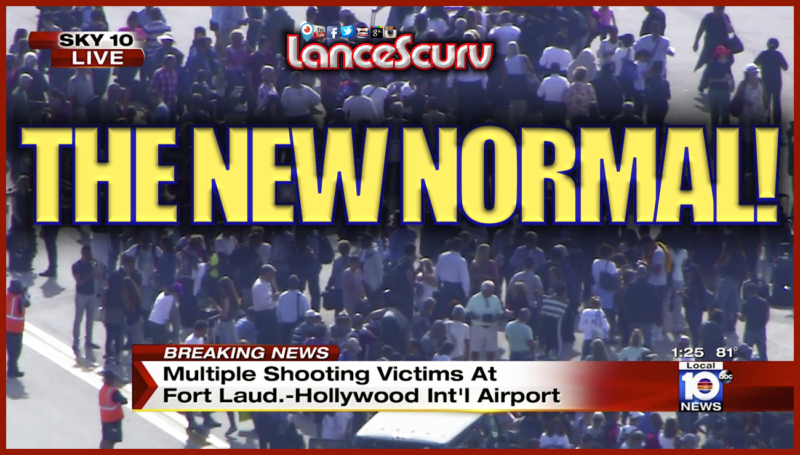 For us, we’ve had no choice BUT to taste that vile and disgusting plate of well seasoned cerebral torture while maintaining a smile on our faces as we jump through the hoops of denial of “massa” while on these “corporate plantations” that you call “jobs”.

Business as usual in White America?

Well allow me to be the bearer of bad news, White America doesn’t exist anymore and if the truth be told, it never did!

You’ve forced the entire planet to believe the lie that YOU were the cream of the earth after terrorizing the world and raping, robbing and stealing the resources of the world only to ride off into the sunset as the hero in your self serving delusional Hollywood movie industry.

Now the world has opened its eyes to the truth and you get absolutely no sympathy from the universe as your condescending confrontational arrogance still remains intact even as you stare the sure destruction of your world and existence right in the face.

Now the stress that you’ve caused to so many on the planet will now come back to haunt you on the land YOU stole at every turn!

Yes, now YOU are the new Niggers and you must feel by divine ordination what you’ve caused us to feel for our entire lives without even a break.

Your denial of the spiritual realm and divine laws will be something that you have to pay a terrible price for, because if you truly believed in what many call Karma you might not have abused the hue-mans in the world around you.

But since you’ve only showed us that you are a greedy murderous beast that is not to ever be trusted, please take your dose of payback like the courageous strong man that you portray yourself to be on the big screen.

We know that man doesn’t exist, but try to ad lib these scenes of poetic justice that we all will sit back and happily chomp on the popcorn as we watch in amusement.

The gates of hell have definitely been opened (CERN) and a multitude of demonic entities are rushing across the land like a tsunami of death to devour as many souls as they possibly can in the shortest period of time possible.

You can arm yourself to the teeth with the best weaponry money can buy but your sanity can’t be safeguarded as you will run yourself crazy with the anticipation of what you know is coming but know not the time in which it will transpire!

You used to drive through the ruins of our neighborhoods feeling so blessed that you didn’t have to live like us but now the monster is lurking invisibly in your world and you are terrified that you just don’t know when the madness will strike again.

Well THAT bad feeling is reality for us everyday as most of our Black Brothers can’t even ensure their loved ones that they will return home alive that night because of the possibility of getting shot by a uniformed race soldier who might also happen to be a card carrying member of the Invisible Empire.

So welcome to our world White America, it might now be all that much of a comfortable place for you to live but you’ll have no choice, you’ll make it…….hell, we had no choice to do so while surviving under your regime of terror.

Now try to adjust to living under the most lethal form of a satanic regime of terror that you’ve temporarily benefited from when you once ruled the world with an iron fist.

We can’t help you and if we even could most of us won’t because we know that when your just due is finally delivered, it will be a well deserved well prepared meal from which you have to eat from.