Minnesota officer shouted 'Taser!' but fired a gun instead, fatally shooting a man at a traffic stop, police say

A 20-year-old man was fatally shot during a traffic stop after a Minnesota police officer shouted "Taser!" but fired a handgun instead, Brooklyn Center Police Chief Tim Gannon said.

Daunte Wright was driving with his girlfriend Sunday afternoon when he was pulled over in the Minneapolis suburb.
Earlier, police said they tried to take the driver into custody after learning during a traffic stop that he had an outstanding warrant. The man got back into his vehicle, and an officer shot him, police said. They said the man drove several blocks before striking another vehicle.
Bodycam video released by the police chief Monday provided more details about what happened.
Wright got out of his car, but then got back in. It's not clear why, but the police chief told reporters it appeared from the video that Wright was trying to leave. 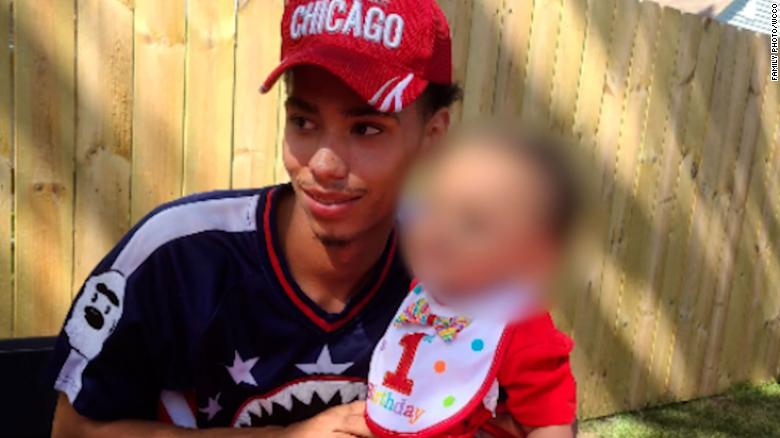 An officer is then heard shouting, "Taser! Taser! Taser!" but then fires a gun -- not a Taser -- at Wright.
"Holy sh*t!" the officer screams. "I shot him."
The police chief said the shooting appeared to be "an accidental discharge that resulted in the tragic death of Mr. Wright."
Gannon offered his "deepest sympathies" to Wright's family and vowed continued transparency.
"There's nothing I can say to lessen the pain that Mr. Wright's family, friends, for the that feeling of loss that they must have," the chief said. "That pain is shared by the community and also all those involved in the incident."

The shooting happened in Brooklyn Park, about 10 miles from where former Minneapolis police officer Derek Chauvin is on trial for the killing of another Black man, George Floyd.
Gov. Tim Walz offered his condolences to Wright's family.
"Gwen and I are praying for Daunte Wright's family as our state mourns another life of a Black man taken by law enforcement," Walz tweeted.

Wright called his mother during the traffic stop
The police chief said Wright was initially pulled over due to an expired tag. Gannon said he had "very little information on the warrant, other than it was a gross misdemeanor warrant."
Moments before he was killed, Wright called his mother and said he had been pulled over.
He was with his girlfriend Sunday afternoon when a police officer stopped him, his mother Katie Wright told CNN affiliate WCCO.
"He said they pulled him over because he had air fresheners hanging from the rearview mirror," Katie Wright said.
During their call, Katie Wright heard some of the conversation between police and her son, she told CNN affiliate KARE.
"I heard the police officer come to the window and say, 'Put the phone down and get out of the car,' and Daunte said, 'Why?' And he said, 'We'll explain to you when you get out of the car,'" Katie Wright told KARE.
"So I heard the phone get either put on the dashboard or dropped, and I heard scuffling, and I heard the police officers say, 'Daunte don't run.' And then the other officer said, 'Put the phone down' and hung it up."
It was not immediately clear to CNN how Katie Wright knew police hung up her son's phone.
She also told KARE she called her son back about a minute later, and his girlfriend picked up the phone "and said that he had been shot. She put (the phone) on the driver's side, and my son was laying there, lifeless."
Katie Wright wept as she told WCCO about her son's final moments.
"He didn't deserve to be shot and killed like this," she said.

Wright was heading to brother's new home
Daunte Wright's older brother Damik Bryant told CNN he thinks Wright did not know he had a warrant out for his arrest.
Moments before the traffic stop, Bryant said, Wright was heading to Bryant's new home for a visit. Bryant said he had texted Wright asking him what was taking so long, and Wright said he had stopped by a car wash. 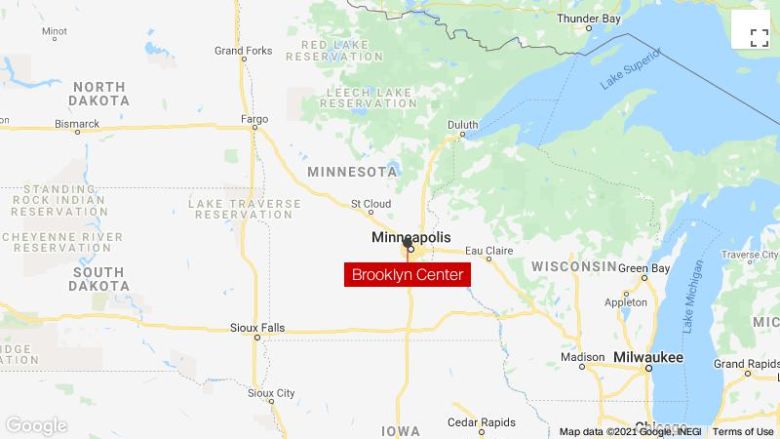 Bryant said when Wright was pulled over, he sent a text saying, "I got pulled over" and asked about insurance information. Bryant said he told his brother to call their mother for that information, and he did.
But by that time, Bryant said, officers had already entered Wright's name in the system.
"So he called my mom, and she said put me on the phone with the officer, but he already told him his name not thinking he had a warrant. ... Cops came back to the car, and the original stop was for air fresheners," Bryant said.
"They asked him to step out the car, and you know his first instinct was, 'What did I do, what's wrong?' And they were like 'Well, put the phone down, get out the car now, we'll talk to you about it when you get out.' So he gets out the car, and ... there's a bunch of police already," Bryant said. "So they ask him to put his hands behind his back, and then he tries to get back in the car to leave and they fired."
Bryant said Wright's girlfriend "called my mom on FaceTime and said that they shot Daunte and Mom was like, 'Let me see him.' And he was slumped over," Bryant said, wiping away tears.
"We don't even really know why. We know what happened and we don't know why."
Hundreds protested after Wright's death
As news of Wright's death spread, hundreds of people protested Sunday night.
Authorities received reports of some protesters hurling rocks at a Brooklyn Park police building, Minnesota Department of Public Safety said.
More than 500 members of the Minnesota National Guard have been activated, and the Guard said it plans to increase the number of members on duty "in response to the events overnight in Brooklyn Center."
The Guard had originally been planning to increase the number of members as closing arguments approach in the Chauvin trial.
"We will continue to assist in protecting lives and property and maintaining peace in Minnesota's community," the Minnesota National Guard tweeted.
A crowd marched toward the police department
As anger over Wright's death grew, aerial footage from CNN affiliate KARE showed several police cars around the Brooklyn Center crash site swarmed by crowds. The video showed people trying to damage police cars.
About 100 to 200 people marched toward the Brooklyn Center Police Department, Minnesota Department of Public Safety (DPS) commissioner John Harrington said.

Protesters confront law enforcement on Sunday in Brooklyn Center, Minnesota.
After nightfall, a crowd gathered around the police department, CNN crews on scene reported. Officers held a line outside of the department, with some officers positioned on top of the building.
Harrington said there were reports of people throwing rocks and other objects at the police building. There were also reports of shots fired in the area, he said.
While one group stayed at the police department, a second group was seen at the Shingle Creek Mall, where around 20 businesses were broken into, Harrington said.
A majority of the crowd at the police department was later dispersed, Harrington said.
A police representative announced over a speaker that it was an unlawful assembly, and at 9:30 p.m. gave the group a 10-minute warning to disperse.
Five minutes later, the crowd was given another warning to leave before a loud boom went off and people took off running. Some of the crowd remained.
The state deployed the Minnesota National Guard, and Brooklyn Center Mayor Mike Elliott issued a curfew until 6 a.m. Monday (7 a.m. ET).

In a pre-court hearing Monday, defense attorney Eric Nelson asked for jurors to be housed in a hotel and be further questioned.
Nelson argued the news of Wright's death might affect the jurors' ability to remain impartial during the trial.
The state opposed the motion for sequestering them, saying it would not be appropriate nor effective.
"We can't have every single world event that might affect somebody's attitude or emotional state or anything be grounds to come back and re-voir dire all the jurors," prosecutor Steve Schleicher said.
Judge Peter Cahill rejected the defense's request to sequester or question jurors.

Brooklyn Center and Minneapolis will see more police
Minnesota's Bureau of Criminal Apprehension (BCA) is on the scene and will investigate, the Brooklyn Center police chief said. 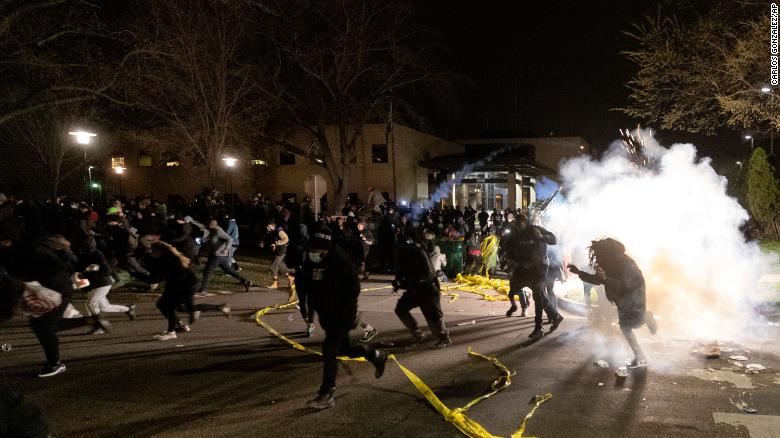 In nearby Minneapolis, a strike team was deployed to deal with reports of break-ins and shots fired, Harrington said.
He said authorities will keep a strong presence in the area in the coming days.
"You will see a robust assortment of National Guard, state and local police departments working together over the next two or three days," Harrington said.
Brooklyn Center Community Schools are closed Monday and will have remote learning "out of an abundance of caution," Superintendent Dr. Carly Baker wrote in a message posted on the school's website.
"I haven't entirely processed the tragedy that took place in our community and I'm prioritizing the safety and wellbeing of our students, families, staff members and community members."