Forums
FORUM
LIFESTYLE
WOULD A BRITISH PER...

WOULD A BRITISH PERSON WHO MOVED TO THE U.S. OR CANADA NOTICE A BIG IMPROVEMENT IN LIVING STANDARDS?

In 2002 I moved to Canada with my heavily pregnant wife and 3-year-old daughter, looking for a new life and yeah, maybe a better standard of living. I’d been working in various Tech Support roles in London, earning a little over £50k a year, so we were doing pretty well for ourselves. I’d been in contact with agencies in Toronto and they’d said I’d have no problems finding work and with my experience, etc., I should expect $80k+, so not quite the same, but close enough to make it work.

But things didn’t quite work out as we planned… Without a degree, my experience was irrelevant. I hadn’t needed a degree to fix computers in the UK, but it turns out that in Canada, I did. So all those $80k a year jobs vanished from view, and I ended up at a temp agency earning minimum wage ($6.85 an hour) moving things around a factory. My wife got part-time night-shift work to boost the family income to the point we didn’t starve and between us we were able to provide 24-hour child care to our young children.

After 8 years I’d had enough, and we came home. I do miss Canada massively, but TBH we’re doing better here now than we were doing there.

So why the personal pre-amble? My opinion on the standard of living in Canada is heavily coloured by my experiences - and struggling every day to pay rent and feed my family doing lower-paid temp work certainly makes my experiences different from someone else who went straight into a good job from day one. So now you know why.

Houses are generally bigger than in the UK, but a lot of that is because many houses in Ontario have basements, and that’s true across a lot of North America. I converted mine into an extra bedroom, a workshop for me and a large playroom for the kids. But rents are also a little more in comparable areas - a family home in Toronto will cost about the same to rent as one on the outskirts of London, but elsewhere, you’ll probably pay more in Canada. So bigger houses, but they cost a little more. 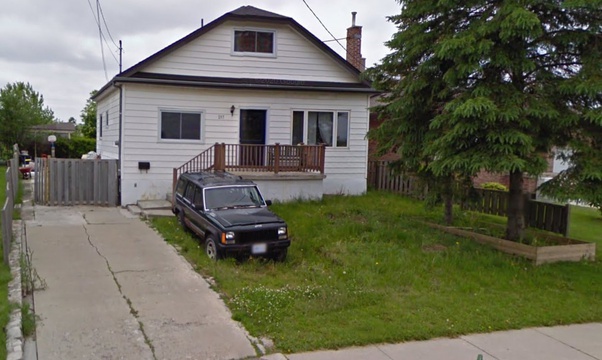 Here’s the house we finally managed to buy. $150k in 2005. Big enough for a family of 4 and detached as you can see, which is nice, but not really “better” than the same money would have got you in a comparable British city. Middlesbrough, perhaps?

Bills. Phone bills are cheaper, cable costs about the same, hydro (electric & water) is a little more than the UK - but that’s probably due to the cost of running the AC for 4+ months of the year. DIY tends to be cheaper in Canada - Home Depot definitely beats B&Q, so keeping your house running is cheaper if you’re a bit handy.

Cars are obviously larger on average, but that certainly doesn’t make them better. Sure there are lots of pickup trucks around, but mostly in Canada it’s cars, mini-vans and modern cross-over style SUVs. New cars are cheaper than the UK, and quite a bit cheaper, but used cars are not. In the UK, you can spend £500 a get a decent runner with a long MOT that might last a few years. No chance of that in Canada. Remember that Top Gear episode where they tried to buy cheap cars in Florida for under $1,000? Yeah, that’s real. Anything even driveable decent is $2,000 + taxes (don’t get me started on that!) and when every penny counts, it’s quite an eye-opener. Ever heard of an Eagle Vista Wagon? Nope. Neither had I, but that’s what I drove for two years because it’s all I could afford. 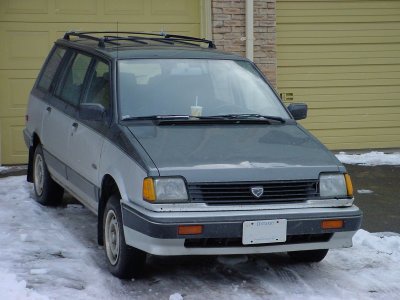 Here she is - what a beauty!

Car running costs seem cheap because gas is cheap, but car insurance is not. Oh, so not! Even after several years of driving experience in Canada, insurance cost several times what I paid in the UK. Doing the maths, driving in Canada only gets cheaper than the UK, once you start doing more than 12,000 miles a year. That’s when the cheaper cost of gas drops the cost per mile below UK levels.

Food is not really cheaper than the UK, even if you shop at Walmart all the time. Yeah, portions are larger, everything has more sugar in it, and quality is objectively poorer - although I’m not sure how that affects the standard of living - but your overall food budget will be about the same. Take-out is marginally cheaper I guess, but restaurants are probably a little dearer when you factor in the almost mandatory tipping.

Appliances are about the same. You do get a bigger fridge for your buck, but then your bottles of juice and bags of milk take up more space, so it evens out. Computers, TVs, all that stuff, about the same cost.

But all this is just financial stuff. Basically I’m saying that overall, things probably cost the same. So I’d say it’s pretty even so far.

Holidays. Brits get 20 days minimum, but in Canada, I got 10 days a year, and only managed to get up to 15 days after 4 years’ service. Might be different for higher-paying white-collar jobs, but down at the low end of the employment market, it’s a big difference. That’s a big ol’ win for the UK.

Countryside/open spaces. Canadians seem to think that 12:00 is a good time to hit the beach, which meant we had three hours pretty much to ourselves on our trips to the beach, and that’s bloody wonderful I can tell you. Then the natives turn up with trucks full of meat for their big BBQ and we head off into the woods. Big forests, open spaces, and a lot of them can be quite quiet. It’s different, it’s wonderful, but is it better? Spend a morning hiking to the top of Snowdon, or take an Autumn drive around Scotland. Beauty is in the eye of the beholder, and the UK is just as beautiful to my eye as Canada - a little smaller and more crowded, but just as lovely.

TL;DR - it all comes down to money. If you were to get a similarly paid job in Canada, would you notice a difference? Probably not. In some areas, yes, but in others definitely not. All depends on what’s important to you.

But if, like me, you slipped down the ladder a few rungs, then you’d definitely notice a drop in your standard of living.

Thanks for reading this far 🙂

Edit #1: This was my first ever answer on Quora and I’m blown away by the response. 5k likes in 24 hours is amazing. I never expected that. Thanks to you all.

And just to clear up a couple things I noticed in the comments - I wasn’t on minimum wage for 8 years! I ended up with a not horrible $50k working in the auto industry and we did OK for a while… until 2008 of course. That kick-started the spiral that led me back to Blighty. Cheers all.

Edit #2: Not even two weeks in and over 8k likes. Amazing! Thank you all so much for your likes and comments. If I’d have known this answer would be so well received, I would have spent more than 10 minutes on it, and maybe explained a little more.

On the subject of “checking before I moved”, well… I did. I contacted several agencies in Toronto, sent them my CVs, had productive chats on the phones, all over the course of several months starting before I even booked our flights. They all said the same thing: “Yeah, there’s loads of jobs, with your experience you’ll do fine.” I believed them…

I went to visit my first choice agency - the conversation went something like this:

Me: “Um… I don’t have one. I mean, I went to University, but I didn’t actually graduate.”

My internal monologue: “Because I decided to be rock star instead, OK? And how did that work out, Stevie? Shut-up - she’s looking at me funny because I’m mumbling to myself!”

Me: “Uh… personal tragedy, um thing, you know… Is that going to be problem?”