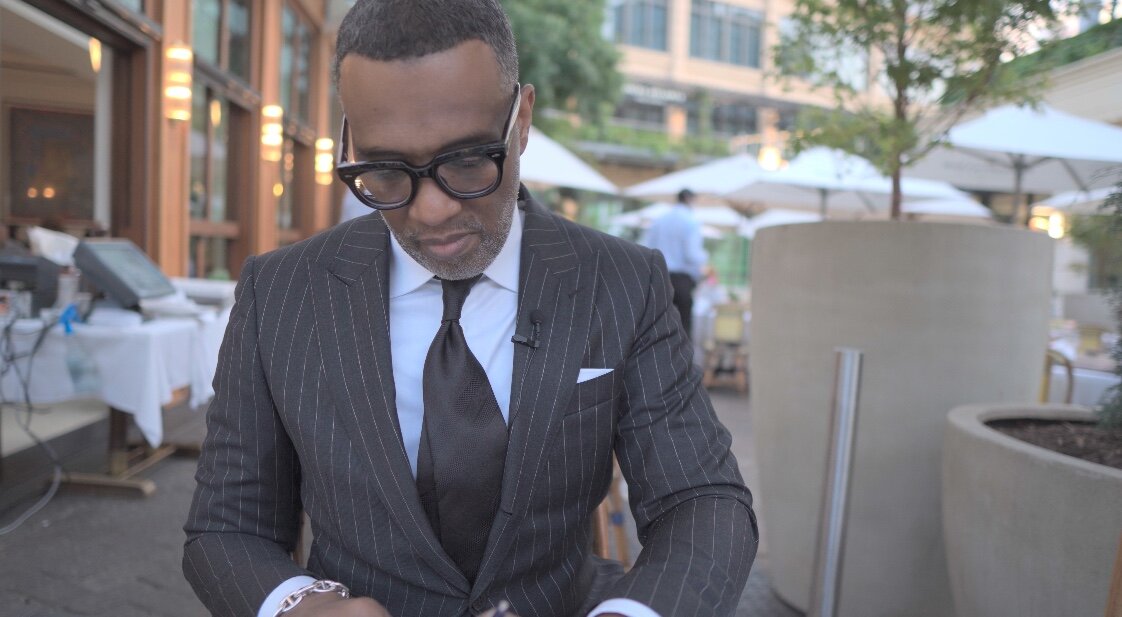 Kevin Samuels is a YouTube sensation and self-appointed “professional image consultant.” His meteoric rise to fame on social media arose from his slick-tongue comments aimed at, in particular, Black women. His advice to ‘modern Black woman’ searching for a “high-value man” mixes hard truths with a dose of entertainment.

His platform opens a space for much-needed conversations addressing women’s accountability in relationships; however, his framework is rooted in an imperialist worldview that subtly reinforces anti-Blackness. Like so many YouTube experts before him, he exploits the pain and vulnerability of Black women’s quest for love while the world watches for recreation.

On his platform, Samuels says his perspective represents the modern, high-value Black man while cautioning women opposing this perspective. In a racist, white supremacist environment, Kevin Samuels’ assertions only affirm an Anglo-Saxon ideology using Black women as an easy scapegoat.

Samuels maintains “the market” defines a high-value man by six core principles: a man’s ability to make at least $10,000 monthly for at least five years, the acceptance from a group of other high-value men, access to a network, like a fraternity, high visibility of a man’s position, and utility of that group. The caveat is that his definition makes former Vice President Donald Trump look like a promising suitor.

Suppose Black women take his advice at face value. In that case, it creates an unrealistic aspiration of seeking a Black male partner, with the median income for Black men being $814 weekly and only 10% of America’s total population of men earning six figures. Not to mention, incarceration rates for Black men are double that of white men in the U.S. It’s nearly impossible for these men to qualify for the remaining principals.

Rather than use these statistics as a guiding post to compel Black women to reframe their definitions and expectations of potential Black male mates, he instead uses women’s desire for stability by comparing Black men against a white-male standard, labeling lower earners as “average.” This basic premise places Black men in a seemingly undesirable position by default while leading women down a dead-end path to seek an unrealistic minority of the male population.

To add fuel to the fire, Kevin Samuels often ranks his guests using his coined term, their “sexual marketplace value,” and bases their attractiveness on height, weight, dress size, and physical features. If, to his belief, a woman is “below average” or an eight or less on a 10-point scale, he suggests they lower their standards of attraction to high-value men and settle for men deemed average, or worse, less than average, to meet their personal and relational needs.

In one video, Samuels compares a Black woman’s physique to former NFL linebackers Emmitt Smith and Barry Sanders, claiming that her weight reduces her options for companionship.

“You’re a running-back size. You could get the A gap like a motherf###ker. So don’t come up in here talking about what men can and cannot do when they got to accept somebody who could run out the power eye,” he facetiously continues, “You should be so grateful that a high-value man would pick you over a woman who is 5’4, 120 pounds, and a dress size four.”

This “tough-love” advice oozes misogynoir, amplifying a historically racist and westernized view of beauty that only serves to demean and Black women.

If that were not indicative enough of how his Eurocentric perspective leaves Black women open for attack, his hyper-focus on surface discourse surely seals the deal. He consistently perpetuates click-bait conversations that incite reality-TV-esque squabbles. But, is unable to properly acknowledge white supremacy as the driving force behind this divisiveness. Instead, he plays a trope role of antagonist against Black women.

His short-sightedness concerning the impact of racism seemingly aims only to blame the oppressed for being oppressed, citing Black people’s need to become a more “competitive people,” while accusing Black people of remaining in ‘victimhood.’ Samuels recently appeared as a guest on The Lapeef Let’s Talk Show, where he provided his insight on women feeling pressured to showcase their natural beauty. When asked about racism, he replied, “It’s not about racism. It’s about winners and losers.”

Kevin Samuels is the poster child for a group of Black men in dire need of love and acceptance from the world. His bootstraps rhetoric screams, “pick me,” from white men who clearly have no interest in doing so. He serves Uncle Ruckus vibes on a platter using every statistic he can find to project his own internalized self-hatred. It’s absolutely egregious and dangerous that this man who has been on the planet for more than half a century would proudly encourage assimilation as a viable solution to the relationship woes between Black women and men of today.

If he is the “Godfather,” responsible for leading the new wave of Black male masculinity, it would seem odd that his first victims would be Black women who, even today, are his greatest allies.

Another problematic aspect of Samuels’s premise is the fact that he is claiming expertise on a topic that he’s clearly unqualified to address. According to LinkedIn, he studied chemical engineering and had a series of sales roles before becoming an image consultant.

With no background in marriage and relationship therapy, psychology, gender-related issues, or anything relevant to his platform, he spews out “advice” devoid of social context. He blatantly ignores gender and racial socialization and refuses to address the history of racist, sexist ideals or the role of societal oppression in the way Black women are viewed. He perpetuates deep-seated myths and stereotypes about Black women as inherently flawed and lacking value outside of their sex appeal.

Samuels uses a distorted, uninformed lens to spread a harmful agenda. By doing this, he joins the ranks of other fake relationship experts who lack actual expertise but who have a lot to say about what Black women need to do in order to “get a man.” In an age in which anyone can get a platform no matter how unqualified they are, men such as Samuels are profiting off of racist and sexist narratives that justify the mistreatment of Black women.

When Black women allow pseudo-relationship gurus like him and others to determine their value and potential as a partner by white standards, they open themselves to continuous self-infliction, tragic self-esteem levels, and, quite frankly, decision-making rooted in predominately opinion-based information rather than facts.

When it comes to love, unfortunately, there is no Eurocentric rubric capable of quantifying this. One must also consider the source of any given advice — is the source adequately educated? Does the source have the necessary cultural lens and experience to provide consultation and have they, themselves, healed internal trauma to project others down “the right path of love?”

It’s hard to tell when advice is sought from an overnight Instagram and YouTube celebrity who may fizzle out of fame once he faces his own internal demons.

Eartha Hopkins is a an alumna of The Ohio State University. Born with a penchant for storytelling, the lifestyle and beauty Journalist offers a distinct voice with the goal to inspire her generation to live authentically. Be sure to catch her two cents on her website muvvaearth.com and Instagram @eartha__hopkins.

This topic was modified 7 months ago 2 times by LanceScurv