JOY REID: CONSERVATIVES WOULD 'TRADE ALL THE TAX CUTS TO BE ABLE TO SAY THE N-WORD'

JOY REID: CONSERVATIVES WOULD 'TRADE ALL THE TAX CUTS TO BE ABLE TO SAY THE N-WORD'

Veteran MSNBC host Joy Reid recently made comments on Twitter regarding conservative’s secret desires to say the N-word. The tweet was immediately met with backlash from well-known Republicans.

“I’ll say it again: people on the right would trade all the tax cuts for the ability to openly say the n-word like in ‘the good old days,’” tweeted the host. “To them, not being able to be openly racist and discriminatory without consequence is oppression. Trump is the avatar for this “freedom.”

The conversation started with Bari Weiss, a former New York Times opinion editor, who wrote and promoted a piece criticizing the ‘illiberal left’ for coming across as a ‘totalitarian society,

Reid’s comment was in response to Dr. Jason Johnson’s tweet who chimed in about the many “hoops” Black people go through compared to their white counterparts.

“Yes, because code-switching, mask-wearing and all of the other hoops that black people have to go through to appease enough of the majority to even GET into law school isn’t the issue,” he wrote. “But censoring yourself from saying the N-word amongst friends is.”

But the backlash from conservatives quickly followed.

“Joy Reid of MSNBC: I suggest you watched Hannity. I called you out as a racist. I also suggest you apologize to every Republican in this country. Finally, I suggest you look in the mirror and apologize for your homophobic comments,” tweeted Leo Terrell, a Fox News contributor.

Conservative writer Dinesh D’Souza noted that Reid’s comment was reckless. “Dangerous and reckless rants like these from Joy Reid occur nightly on MSNBC and they should be ashamed…”

Despite push back from critics, many users sided with Reid.

“So @JoyAnnReid is getting heat for this comment? The entirety of the GOP platform is racist. There are only THREE Black electeds in Congress. THREE,” wrote one user, who continued, “How often have you heard white people whine that they can’t say the n-word but Black people say it all the time? Joy’s not wrong.”

Reid is no stranger to controversy. She also did not hold back her comments on the Jan 6 insurrection, as reported by theGrio.

In a powerful speech on MSNBC during the network’s coverage of the riots, Reid drew a clear comparison between the police response to the insurrection at the national Capitol and this summer’s national protests in support of Black lives.

“These people were so unafraid of the cops,” Reid opined in the clip — which immediately went viral on Twitter — “who were sparsely distributed through our Capitol, which hasn’t been breached since 1812, when it was burned.” 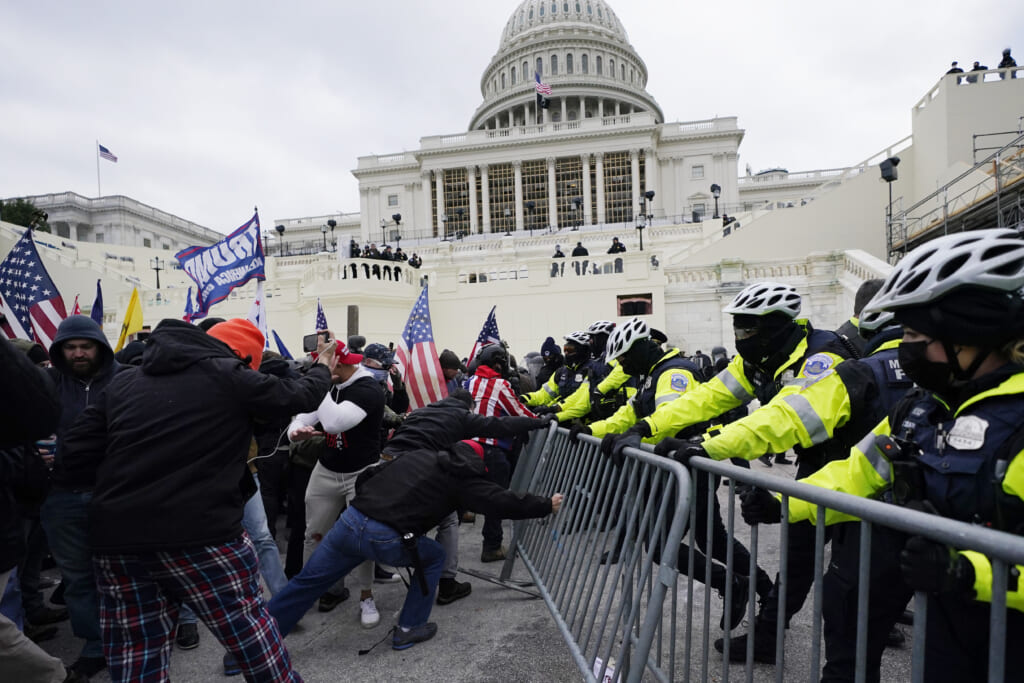 “The reason they could film themselves throwing things around the walls of our Capitol, our property, go inside the Capitol, sit at Speaker Pelosi’s desk, taking pictures of themselves, have that played on Fox News… they know that they are not in jeopardy,” said the host of MSNBC’s weekday show, The ReidOut.

“The cops are taking selfies with them, walking them down the steps to make sure that they are not hurt. Taking care of their bodies. Not like they treated Freddie Gray’s body,” Reid noted, referencing the 2015 death of Gray who, at 25, died from injuries sustained in the custody of Baltimore police.