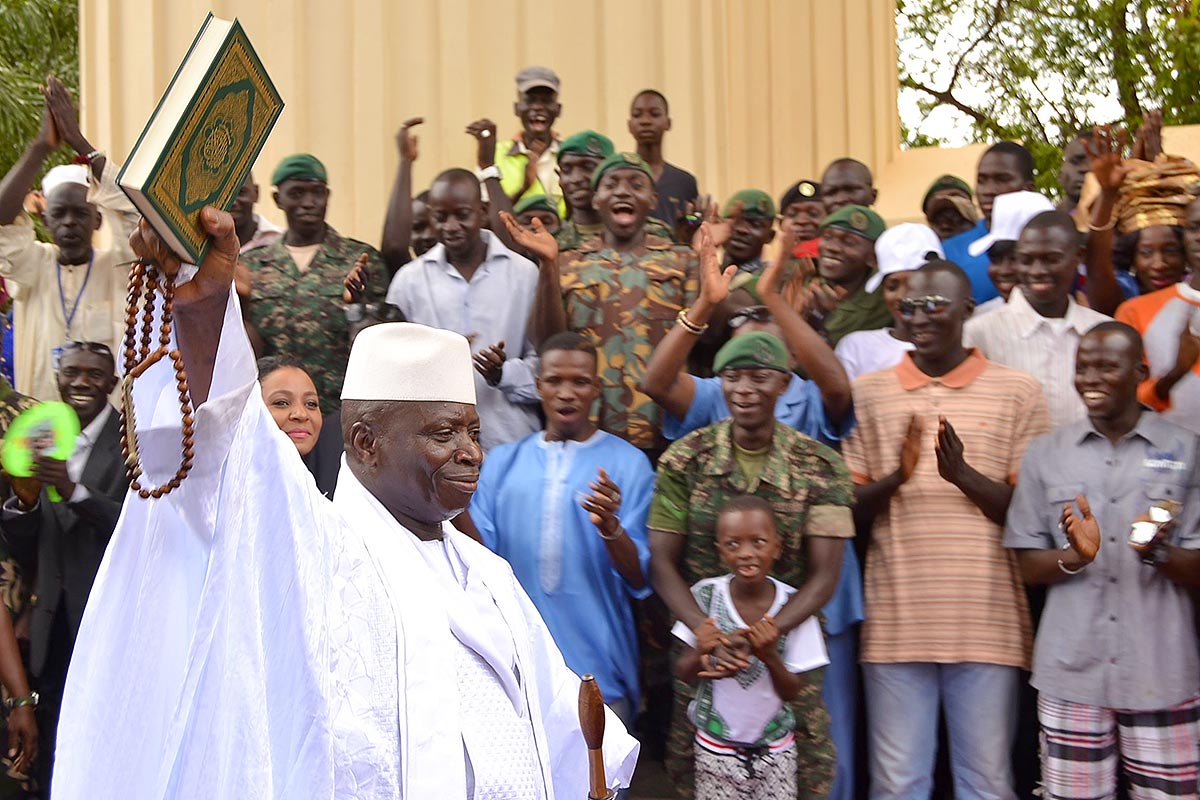 This is the largest massacre committed during the 22 years of Yahya Jammeh’s reign in the Gambia. More than fifty migrants were executed in July 2005. Clear evidence that it was carried out on the orders of the government was so far the missing piece. Last week, key testimonies before the Truth, Reconciliation and Reparations Commission implicated former President Yahya Jammeh himself.

In Yahya Jammeh’s Gambia, July 22 used to be a day of pomp and pageantry. It was the anniversary of the 1994 military coup that led Jammeh to power for the following 22 years. Music, food and stories that celebrated Jammeh as the savior of the little West African nation were shared throughout the country and on national television.

On that day in 2005, Jammeh was having his usual celebratory event at the McCarthy Square, a park near the State House, when he allegedly received information that some “mercenaries” had been intercepted in Barra, a coastal settlement separated from the capital city Banjul by a 7-mile waterway.

But rather than mercenaries they were more than 50 migrants from various African countries. Soon after, most of them disappeared. Some eight bodies were found the next day by locals in Ghana Town, a settlement less than an hour drive from Banjul, the capital city.

Speculations as to the fate of the migrants have been rife ever since, until July 2019 when hitmen called Junglers, operating on the orders of Jammeh, confessed before the country’s Truth, Reconciliation and Reparations Commission (TRRC) about their direct role in the killing of the migrants. The testimonies of the Junglers were as detailed as they were chilling. But there remained a void in the cruel tale of this crime: who arrested the migrants, when, where and how were they handled and detained up to the time of their execution? And who ordered their killing?

Last week stunning new evidence was revealed before the TRRC. Senior witnesses stated that Jammeh’s government was directly responsible for the massacre.

Assan Sarr was Gambia’s chief of Defence staff at the time. On February 25, he told the TRRC by poor-quality video link from Nigeria that on July 22, 2005 he was seated at the McCarthy Square with all security chiefs, including Ousman Sonko who was then the police chief. (Sonko is currently in detention in Switzerland where he is charged with serious crimes allegedly committed in the Gambia.) Sonko got a call from an “informant”, telling him of the arrests in Barra, Sarr said. He informed the security chiefs and approached Jammeh who was sitting in front of them.A few minutes later, the president left the celebratory event he was attending and returned to the State House. Sonko “came back to tell us that they [the “mercenaries”] needed to be ferried to Banjul and the navy needed to help,” said Sarr. Sarr contacted the then Navy commander Sarjo Fofana to ferry the migrants, which was done by the navy boat GNS Fatima.

Almost at the same time, a 34-year old head of investigation at the National Intelligence Agency (NIA), Ousman Jallow, got off the phone with his boss Ngorr Secka, director of operations at the NIA. “He [Ngorr Secka] told me that I should go to the navy, that a boat was prepared with armed men, and that I should go with them and bring them in bits,” Jallow told the Commission on February 24. Jallow processed the migrants in Barra with the help of police officers Mawlud Faal and Kebba Bah, and others, he said. By the late evening, all the migrants had been transported to the naval base.

“So, if the government denied any knowledge of the West African migrants, what would you say?” asked TRRC lead counsel Essa Faal.

“This will be contrary to the reality I have lived,” answered Jallow.

And the authorities also knew that they were not mercenaries. “I called my boss and told him that these are not mercenaries. They are illegal migrants,” said Jallow who at the time was investigating a suspected case of human trafficking, through irregular routes to Europe.

“There was no reason for our service chiefs to believe that these people were mercenaries,” asked Faal.

A fact that was confirmed before the Commission last week by Sarr and Secka.

It is alleged, however, that the authorities had already made up their minds. The investigation into the migrants’ case took only a few hours. Then they were executed. Ebrima Jallow, a driver with the Gambia Transport Service Company, a public transportation outfit, told the TRRC that he was ordered to pick up “some wrestlers from Senegal,” something he understood to be a lie when he found their hands tied behind them. Jallow squeezed the migrants in a 36-seater bus, some of them sitting on the floor.They were to be detained at four different locations at least – Kairaba Police Station, Kotu Police Station, a safe house in Bijilo and paramilitary headquarters in Kanifing. According to Jallow, he had finished to transport them by 4 a.m on July 23.

THE EVIDENCE NO ONE THOUGHT EXISTED

After the migrants were killed, Gambian authorities made efforts to ensure evidence of their arrest was destroyed. For example, the recording of the names of the migrants at the Barra Police Station and at the Gambian navy could not be found.

Ghana – from where the majority of the victims came – attempted to investigate the incident in 2005 and 2006 but their efforts were frustrated by Jammeh’s government. Nigeria made its own investigation in 2008 that was not published. On that same year, the United Nations and the Economic Community of West African States (ECOWAS) jointly investigated the incident. The joint report which was never made public was submitted in April 2009. According to the Bulletin of the UN Department of Public Affairs, the report concluded that the government was not “directly or indirectly complicit” in the killings. While stating that “what happened on the Gambian side remains somewhat a mystery,” the report blamed rogue elements in Gambia’s security forces “acting on their own” for the massacre.

But Ngorr Secka has secretly kept the most valued evidence he possessed: a record of the names of the migrants he has made at Kairaba Police Station on that fateful day of 2005. On February 25, he read the names of all migrants and their nationalities before the TRRC. There were 51 names on his list.

“The biggest revelation of all this week was the list of 51 migrants,” said Reed Brody, a lawyer for Human Rights Watch who has campaigned for about four years to hold Jammeh accountable for human rights violations, including the massacre of migrants. “We don’t think that the list is by any means complete, because there are migrants of whom we know and others who were described by earlier witnesses before the TRRC who are not on the list,” Brody told Justice Info by email. “But by giving us new names, it raises the hope that we will be able to locate their family members and bring closure to people who have no idea how their loved ones perished. Equally as important, by revealing new nationalities for the victims, it opens the possibility that Congo, Cote d’Ivoire, Liberia, Nigeria, Senegal, Sierra Leone and Togo will join Ghana and The Gambia in the hunt for justice for these crimes.”

SIDE EFFECTS WITHIN TODAY’S GAMBIAN POLICE

This week’s revelations are also exposing some senior officers in today’s Gambian security system in the cover-up of the massacre. In his testimony, Assan Sarr said that when the UN investigation team came in 2008, he was called to the national police headquarters where he met with Gambia’s current Interior Minister, Yankuba Sonko, who was then the Crime Management Coordinator. According to Sarr, Sonko told him that “we must not do anything that will damage the reputation of our country”. Sarr understood that to mean that he could not tell the truth to the UN/ECOWAS inquiry. Assan Sarr was soon after sacked from army. He is now a defense attaché at Gambia’s embassy in Nigeria. Secka no longer works for the NIA but he is currently an adviser to Yankuba Sonko. And the man who called Sarr to come to the police headquarters was Ensa Badgie. Badgie – who was jailed under Jammeh – has been Gambia’s police chief until a year ago when he was redeployed as a Regional Police Commissioner.

Previous : THE R. KELLY TRIAL: A SMEAR JOB OR KARMA FOR A PREDATOR?
Next : DO YOU KNOW WHERE YOU ARE? THIS IS THE MATRIX! – DENINA THE TITAN SPIRIT