Here we are in today’s world seemingly unaware when one of the true gifts of expression has left us on this plane of existence. I am refering to musical expressionist/poet Gil Scott Heron who passed away (born April 1, 1949 — May 27, 2011) last week at the age of sixty two.

As always when I write about the passing of one of our icons, I don’t get into writing about the factual details of their life because you can find that in abundance with a quick Google search and you will most definitely find a better job of that online than I could ever offer. 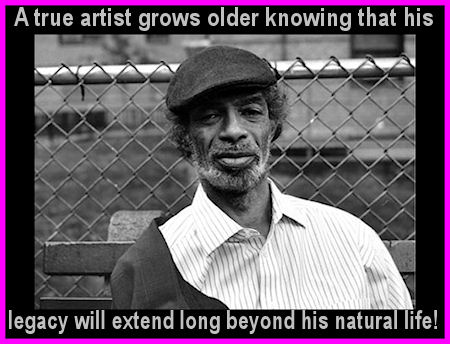 I prefer to mainly focus on what an individual has done for me through their expressions, creations and accomplishments. That being said, whether the world acknowledges him as an all time great, I will because of the magnitude of his expressions in my world and what I have derived and learned from to be able to forge forward in my own personal creative path.

I grew up in Harlem and Washington Heights in the 1960’s and 70’s. Although my family moved from Manhattan into Queens in September of 1968, because my Father’s business was based in Manhattan (Broadway & 152nd Street y’all!), I had the VERY unique opportunity to spend lots of time with not only my Father, but with the wonderful people of that time period who brought with them a wealth of experience through conversation and observation that I literally soaked of like a sponge!

It is because of that crucial time period as well as a few other dynamic factors that made me the person that I am today.

How could I ever forget the song “In The Bottle” as those long old Cadillacs blasted it on those Harlem streets on their 8 track players (Remember those?) slow creepin’ through the neighborhood sporting whitewall tires? I remember those same dilapidated Frank Lucas heroin dope strewn Harlem streets that are showcased in that videoclip of “In The Bottle!” Many attempt to “fake” what I have flowing from me so naturally and that is okay with me, because at the end of the time real will always recognize real!

And this is my purpose for honoring a man who created such a profound ripple effect in the world of aural expression whether the corporate money driven entities want to bow their head in respect or not!

While I am not what many would call a hater, I don’t think that anyone would think that I am hating on anyone when I say that if rapper Lil’ Wayne was to pass away today it would dominate the airwaves as though Jesus Christ Himself returned to once again walk the face of the earth! And while I personally think that Lil’ Wayne IS one of the most talented and gifted rappers around today, he loses points in my book because the overwhelming percentage of his creations are driven by the need to speak on money and sex.

He is a pied piper leading all of his fans straight into the pits of hell!

Not only him now, but most of those who have sold out their “fame slot” to follow the orders of a higher evil agenda of mass mind control through our powerful medium of music that will leave the future leaders of our society leeched of all righteous purpose and direction that was initially placed within us by our Creator!

This is why we must stand by the artists and expressionists that we DO have alive and well on this earth who have dedicated their craft to counterbalancing the filthy materialistic agenda that has become all to commonplace in the musical diaspora.

I urge you all who may not know this man or his music to look him up and get to know what he was all about because if you did, you will see how watered down the artists are today and how we are being shortchanged in such a powerful medium that can make such a big difference in the world to unify and beautify, making monumental change that most could never comprehend!

Gil Scott Heron was never afraid to speak out on the conditions of our world that helped to keep the oppressed people even more oppressed. I guess that is why you haven’t ever seen him showcased by the powerful media outlets standing next to some half naked pass around media whore (Yes I am speaking about YOU Amber Rose!) that you will get in overwhelming abundance when you have sold your soul to the Illuminati in exchange for world fame and fortune.

Mr. Heron had courage running through every vein in his body as a man and as an artist to put himself out there like that honestly, how many of our entertainers and artists do that today? These rappers speak about being “gangsta” but is it really “gangsta” to sell out your people and lead them to hell with the God given mastery of the written word and rhythm that He has blessed you with so abundantly to flip the script and prostitute it for the enemy?

If you ask me that is weak!

That’s punkish, but if that is what they choose to do then so be it, they will learn what they are doing in the end.

But personally, Gil Scott Heron’s expressions have been submerged into the deepest recesses of my subconscious mind because he captured the feel of that rich time in history when our culture and expressions weren’t tainted with the prospect of how much money would be earned in the first week of record sales. It was a time in recent history where one learned their craft for the love of it without the worry if it would sell or not because they knew that if it was put down in a loving and truthful mindset and spirit, the people would always support it!

Now our music is not a way to deal with the realities that we face but it has become a way of escapism! Our youngsters know every single word to these filthy rap songs but ask them what is happening in the world and they can’t tell you a damn thing that is happening in their world…….and FORGET about a local awareness!

So Mr. Gil Scott Heron I take my hat of to you and do believe that because of your dedication to remaining untainted and being who YOU were made to be to call it like you see it, you will be blessed to occupy a great space in the hereafter because you surely have left an impression on my young soul growing up!

Thank you and may you Rest In Peace!

Previous : The Divinity Of Time
Next : Proper Etiquette: Does Our Younger Generation Know What It Means?