Many of you may have noticed that I’ve been posting plenty of videos in my support of local District 5 City Commissioner Candidate Regina Hill as she begins her early campaign toward her victory in that seat.

District 5 to be honest is an area that is a prime example of what is known as gentrification, it is a minority neighborhood and a historic Black area that is primarily populated by African-Americans who are considered the downtrodden in Orange County, Florida.

The trick here with this area is that it is located next to the downtown area and its attractions, mainly the new Amway Arena which is the home court to the Orlando Magic as well as the location of the massive Creative Village project that is being erected at the location of the old Amway Arena the was recently demolished to make room for the new construction.

With the corporate interests salivating at the prospects of building into an entirely new wing of an area that in actuality is connected to downtown, the perception and reality is that the population of Black people who have always been there just happen to “be in the way” of what these sharks in business suits consider progress.

I noticed this in the short time that I’ve lived here in my adopted hometown of Orlando Florida, but never has it been more evident that the Parramore area has been scorned, demonized and put down in the harshest of ways in order to make it appear fair seeming that what the powers that be are doing is quite alright.

The media helps with this demonizing as it never really has anything good to say about this part of the city and I will agree that there are many problems there and these same powerful entities – like in many other similar downtrodden areas across the country – would rather allow Parramore to collapse so that they can profit from its demise.

But here in Orlando, it is not just the Parramore area that suffers from a bad reputation that is fanned by those who eagerly await its death, it is any area that is populated by Blacks that are slandered to the point where property values are far less than other areas populated by other races because the perception is that there is crime, drugs, prostitution and killings there on a daily basis as though these things happens nowhere else and that all other locations in this city are free from the negative events of the times.

When I first moved down here to Orlando Florida from New York City, I worked for a time as a corrections officer here and for someone who just arrived to this fraud of a Disney illusion, I was quite shocked that the reality of this place s the polar opposite of what they aggressively advertise to get these unsuspecting tourists down here to spend the money that never really benefits the people with the low paying “barely making it” jobs that are freely given out like chains in the chain gang in prison.

It’s tough living here if you don’t have the financial resources, family support and the clean record to rise up in such an oppressive place but it can be done. My concern after taken a walk through the Parramore area with candidate Regina Hill was the sense of hopelessness that was a constant companion amongst the palm trees and great weather as the threat of a takeover loomed over the heads of the residents in the form of the unwelcome high rise buildings that stared down on this wounded place that many of the forgotten call home. 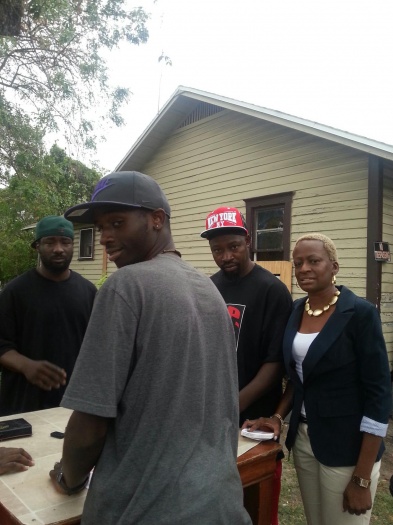 The few examples that I encountered of this gloomy spiritual state of being were overshadowed by one young lady who was questioned by Regina about what it would take to change her life in the form of aid and this young lady did not have an answer or even a CLUE as to how to answer that question whatsoever!

Here was a young Mother to whom I’ll put at about 21 or 22 years old with two children and was obviously getting aid from the state but wasn’t even aware of what must be done to change her life because she didn’t even know that there was MORE to life at this point.

I even asked her that if she knew someone that had untold BILLIONS of dollars who wanted to help her do anything in life that she wanted to do with money not being an issue and all she had to do was to state what it was that she desired to accomplish what would it be?

She couldn’t even begin to think of anything after about an entire minute of staring up to the sky in such a bewildered state. It was sad. But here we have this young Black Mother living in a city that automatically demonizes anyone who is in her position instead of providing some type of help to her which would benefit not only her children and herself, but everyone in the community and even the OTHER communities that may not seem to have any connection to her. What I suggest is NOT a handout to anyone but an INVESTMENT in a human being that would generate untold benefits to the world and everyone in their path.

But the real criminals, leeches and bloodsuckers will never see it that way as the people of Parramore as well as most Black neighborhoods across the United States are merely modern day plantations that are designated to fuel the economies around it as we implode in on each other in the worst way as the prisons fill up and the judges get paid as well as the countless police officers, court officers, judges, lawyers and private companies that benefit and profit from our ignorance thrive as they laugh all the way to the bank! 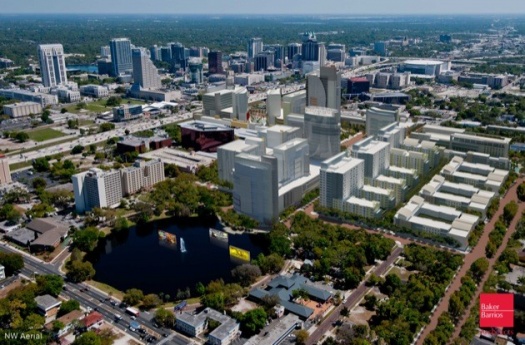 Yet we, as human beings in a bad position in life, are too much of a burden as literal millions of dollars are thrown up to build sports arenas and entertainment complexes to titillate those who care not for us as we suffer in the gutter with a hopeless state of mind. We have got to do better by our own and we have got to unify and step up to the plate so that we can be in a position to invest in our youth so that they cease to make those rich who are in a position to benefit from us being the criminals and baby making machines that their system thrives on.

Which ever way that you can make a change know that the time is now! Hit the streets and reach out to help your downtrodden Brothers and sisters not merely with a meal or a blanket, but to teach them HOW to feed themselves by giving them the opportunity to learn how to fend for themselves and grow into the self sufficient human beings that our creator desired us ALL to evolve into to HIS glory!

Anything less that that because of the greed of another is purely demonic and satanic. No, I don’t desire to know your secret handshakes because it has not done a damn thing to change the world in helping those who cannot help themselves and it damn sure won’t get me into Heaven in the afterlife and here on this earth!

Previous : LanceScurv TV – Regina Hill Speaks To A Parramore Elder On The State Of The Youth!
Next : These Huge Satanic Drug Corporations Are The Ultimate Drug Dealers Who Fight For The Turf Of Your Mind!