Our children today are not only growing up so fast but they are growing up in a manner where we find ourselves looking at them as
though they are strangers.

Gone are the days where we would gather around each other in the family gatherings and marvel to ourselves how “That little girl of
yours is looking so much like her Daddy that it’s frightening!”

And while our children will still display the inherently strong traits of a shared D.N.A., most often the common similarities will end there as it seems as though another spirit has taken over altogether and it is very noticeable as the years fly by.

Well where did this “new” person come from? We know that children have their own unique personalities and will go through rebellious phases in their developmental years, but what is going on today is quite different from what you and I went through as we were growing up as well as the dangers that are around today that were literally nonexistent in our world coming up.

It’s as though the minds of our children have been hijacked!

One day they are your darling little baby and the next day they are staring you down like thy want to kick your ass!

Not all youngsters, but far too many of them!

The news is laced too frequently with tales of how the disgruntled child injured their parents or even killed the in a fit of rage because they couldn’t get what they wanted as far as a possession or the freedom to roam about the world usually with some other roguish entities.

Why is this becoming such a common occurrence? 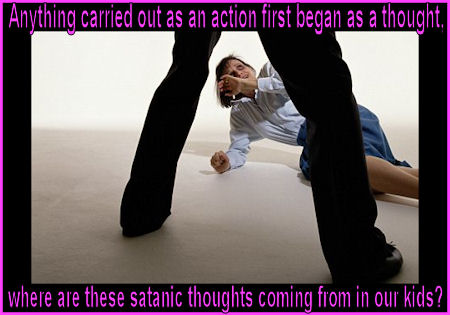 Well since the behavior has swept across the land affecting the masses of young adults in a common manner then I would have to see what is the common denominator in the lives of these boys and girls that could have affected them wholesale in such a convincing fashion.

Now I wouldn’t be telling you anything that you don’t know if I mentioned how the world wide web has infiltrated our homes and has
become a very appealing and very effective tool to influence our young, we already know that and that IS the case across the board. But to merely state the obvious and not go deeper would render the previous paragraphs in this article useless to say the least. So what more do I have to say on this issue that hasn’t been touched on before?

We need to understand that we have NOT understood have powerful a movement this has been right in the secured quiet environment of our homes. We have literally “locked in” the negative forces of this world at home with our children like a piece of meat marinating overnight to absorb the essence of the seasoning that it is soaking up. So why do we wonder why our children are flavored with the strange spirits that they’ve seemed to pick up overnight?

Why should it shock us?

We fail to realize that the human brain is made to absorb information and data at an extremely swift rate and this is especially true even more so when one is younger. In my days of being raised there wasn’t anything around that was fast enough to hold my attention for long because I would master the challenge within it in just a short time, and then it was on to the next scholastic endeavor.

We had the down time to enjoy our childhood and we knew deep down that there were things that adults “knew” and did that we weren’t ready for yet nor were we encouraged to even inquire about those things or we would run the risk of getting disciplined in a very unpleasant manner!

“You need to go one outside and play or do something else real quick before you get a butt whipping from trying to be all up in grown folks conversation, you are only a child and should stay in a child’s place!”

How many of you remember hearing this?

Well the youngsters today don’t have to hang around the kitchen as though they are doing something when in actuality we were killing time trying to eavesdrop on the juicy conversation that your family was having about what REALLY happened with the Pastor and that “shapely new lady” in the church who just joined.

We would catch just a piece of what happened before getting our tail whipped but we would compare notes with our other friends who may have heard another piece of the puzzle but we never really got it all and if we did we couldn’t really understand it completely.

We didn’t have even a fraction of the understanding to be able to decipher what the total meaning of that situation was, we just knew
that it was something that was bad. But even our youthful ignorance we still knew the difference between right and wrong, our little moral compasses were being developed even from way back then at those early formative ages.

Our kids don’t even have the time to try to sit up under us because when we send them in their rooms to do their chores or work out their punishment time, they snicker at how dumb we are because they can lock themselves away in their room and have every foul spirit in the world enter their private space through the cyber world to school them on the netherworld’s most transgressional acts of decadence until their curiosities are not only satisfied but swollen with this formerly out of reach and forbidden knowledge.

I can remember sitting around when I was about 12 years old with a couple of school buddies who came over to my house to do our homework together and after everything was completed we played some records (Remember THAT term?) and got into doing some artwork that wasn’t due but we wanted to do it ahead of time so that we would be ahead of the schedule.

We wanted to know what that was! Lol!

Did I say everyone knows this? Well most do and the sad part about it is that we would be hard pressed to find a twelve year old child who DOESN’T know what it is! And to add gas to the fire there are TOO MANY kids of that age who are literally PROS at the very things that their Mama might not know how to do as well!

I KNOW that God is coming soon for His world by the things that have been transpiring on this planet against everything that He has
instructed us to submit to!

What we need to realize is that the tactics that were used in our upbringing many years ago have been rendered ineffective by the
strides made in the technological arena that have usurped the hold that our parents, guardians and caretakers had over us with an iron grip! The young children today have minds that were hijacked from right under us without us even knowing it. We are not a part of their world anymore because what they do online goes unnoticed and where they go once there would shock us beyond words.

If you don’t retain ANYTHING from this blog other than these words then remember this:

It is your God given right as a parent/guardians and caretaker of your young to control, possess, guide and influence their minds righteously according to God’s law FIRST before the world gets to them through the vicious attacks on their developing moral standards. Never forget this and NEVER take a step back when challenged on your commitment to them to follow through on the divine positioning that being a parent brings! Because losing control over their minds is just as good as throwing them away to these seen and unseen demonic wolves!

Stay on point. Stay on your post. And ONLY take orders from the Holy Spirit and gauge everything you do by His word and everything will be alright!

Let me hear from you, leave your comments below.