Lance Armstrong has sent shock waves throughout the world when he sat down with Oprah Winfrey to allow her to go in depth with her inquiries on the falsehoods that he perpetuated throughout the greater part of his career.

While the actual interview is being blasted throughout the world as I type these words, I won’t have to explain the details because it would be redundant to do so. I want to focus on the area of what his admission to using performance enhancing drugs and doping means to us a society and culture across the world. 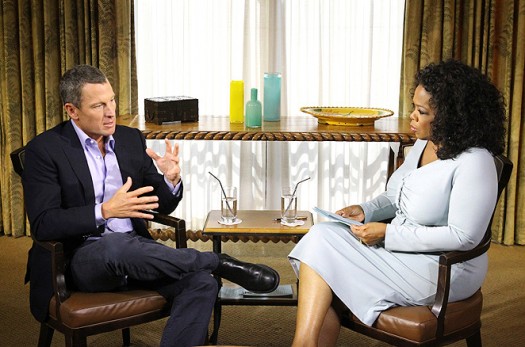 This issue of using drugs to enhance ones athletic performance is not only an American issue, it’s a worldwide dilemma. So much that no matter what country you originate from or what culture you identify with, you, if you indulge in these illegal and unethical practices, are part of an independent shadow culture onto itself that is often never seen by the general mainstream public who gets caught up in the promotion of sport as entertainment and the deliberate image creation that is executed precision and hair splitting accuracy.

So while yet another hand crafted sterling image comes crashing down I say to the world “why would you be surprised in the first place?”

Why do I state this?

Well this is the way of the world that we ourselves have signed off on every time when we as men lust after the breasts of a woman who obviously had them surgically enhanced.

We’ve signed off every time as a woman your man performs like he never has before even with a gut measurement that has kept up on par with the years of his age (50 years of age, 50 inches of a waist measurement!) yet you never question it because you as his woman know that the little bottle of blue Viagra pills is the reason for his erection resembling a pool stick.

We’ve signed off every time we’ve attended a baseball game to watch record home runs being batted out of the park while at the same time knowing that something is not right in the bloodstreams of those who are easily breaking those long standing records.

Sylvester Stallone gets caught at an airport with HUGE amounts of Anabolic Steroids yet it never minimized the effect that a Rocky movie has on their psyche or the place that he has won in the hearts the world over.

We can’t say a damn thing about anyone because we as Americans consume the majority of the hard drugs of the world more so than any other country in the entire world!

So we’ve made it okay for Lance Armstrong to feel justified in his illegal indulgences and to spit it back at us as this squeaky clean corporate sponsored hero because we WANT to be fed the “dream” no matter what the costs as our culture of entertainment is more important to us than the harshness of reality.

Yes, we’ve signed off long before the revelations of Lance Armstrong came to light…….

But I find it funny that certain sports like bodybuilding and its practitioners never seem to get slammed like other athletic endeavors for their gross misuse of illegal substances because their larger than life achievements are already accepted as something that could never be attained by a regular Joe Blow. Muscles oiled up on stage is a freak show no matter how you slice it so it’s okay for drugs to infest that sport but not something that is backed by corporate entities with pristine images to uphold.

You know, we as consumers of these illusions are just as much in denial about what is and deserve to be deceived because reality isn’t good enough for us.

We want bigger. We wants faster. We want stronger. We want youth forever and to hell with those gray hairs creeping up on our hairline dammit we’ll just dye it away and pretend that it’s just not there!

We can’t discipline ourselves at the dinner table so don’t worry, we’ll call up the liposuction specialist to vacuum the results of that spirit of gluttony away!

We’ve lived a life of total disregard for the care and maintenance of our magnificent bodies so when those inevitable wrinkles appear not only from age, but from gross neglect, we want to chop ourselves up at the plastic surgeon to remove those wrinkles away like we smooth away the lumps on a bedspread when we are making up our bed.

We don’t want what’s real for ourselves so how in the hell do you expect Lance Armstrong to play by the rules that you can never muster up the discipline to adhere to for yourself?

He knew that the world wanted faster! He knew that it’s not about who you REALLY are but about the “image” that one projects to the world regardless if it is authentic or not!

He knew that it’s about your “brand” and that it’s the aim to be appealing to all family friendly corporate entities so that he can get paid and pimp your mind against you!

He probably saw the money earning potential of beating cancer and came up with the twist that would make his “brand” even more meaningful to reach the pockets of other cancer victims and their families even deeper as their spokesperson.

Who doesn’t know that these celebrity led non profit charity organizations are nothing more than a photo opportunity and a tax write off for those at the helm of these rackets?

It’s all about being convincing enough to make us believe the illusion that we see and it is no different than the actors on the screen who are the spin-masters in their abilities to make you believe that what they do is authentic.

You are the snake and the powers that be who get your money out of your pocket to be entertained in sports and movies are the snake charmer and YOU are just as addicted to the scam as long as you can remain in denial of the truth.

But on this day Lance Armstrong opened up and spilled the beans about his illusion that many have bought into but if the truth be told I feel it is just a simple case of proactive damage control.

If Tiger Woods can play golf again and have his indiscretions banished by a carefully planned image campaign that included an admission of guilt publicly, then look for Lance Armstrong to come out on top eventually because once the corporate world has invested so many millions into your “fraud” of an image, they will ALWAYS seek to recoup the money that they’ve furnished to help create that image. Believe that!

You or I as blue collar working stiffs could NEVER get the second chance at bat in our personal lives that these “celebrity entities” will get because their “brand” feeds so many people and in fact is an industry that merely has his face on it.

…….and we need to truly understand this when we watch these famous celebrities to whom we frequently see but really never know, we have a taste for what they dish out because they know that we don’t feel as though we have a chance of soaring to the heights of true success. So they give us an illusion that we can lose ourselves in like a drug so the pain of our lives doesn’t sting as painful as it has.

So as we point fingers at the Lance Armstrong’s of the world and say that his image is a “pack of lies” remember that he is merely a reflection of us as a collective and until we correct our need for the deception that he has given to us through his 7 Tour De France wins so abundantly we need to BANISH that need at the root so that we’ll never get deceived ever a person like him ever again.

Do I think this will ever happen?

…….because as we speak the NEXT scandal is being prepared for the masses and we are going to eat it up as though it’s not similar to us!

How would YOU fare if you had worldwide fame?

It wouldn’t be that easy to get to that vial of crack now would it?

It wouldn’t be so easy to get out to that man that eats your pussy so well in the back seat of your car while your husband is at home sleeping so deep.

It wouldn’t be so easy to live that secret life of same sex rendezvous that would literally ruin and destroy your life as a pastor of a large well known church!

So don’t point fingers at Lance Armstrong because we created him!

Just give him credit for having the balls to sit down in front of Oprah to answer the questions that have never been answered before.

But the real question is, how many of us would be so willing to sit down with Oprah in public for the world to see about OUR dirty little secrets?

…….what happened? Cat got your tongue?