Although I’m just getting around to this story, I had to applaud Mike Tyson for him “straightening out” CP24 News Anchor/ TV Host Nathan Downer, who truly asked an out of line question as Mike and his “Undisputed Truth” producer Alex Choko were there to promote the show that was premiering in Toronto Canada.

The conversation at first was going along just fine as they spoke about Mike’s meeting with high profile Mayor Rob Ford when Nathan Downer inquired about Mike Tyson’s effect on Mayor Ford’s political campaign and if it would hurt his chances to win in the following quote:

“Some of your critics would say that this is a race for mayor and we know that you’re a convicted rapist, this can hurt his campaign, how do you respond to that?”

While many would have taken the low road and let it go because of the scenario of having the cameras in one’s face for a live interview, Mike Tyson wasn’t having it and I’m glad that he put the pressure right back on him in the appropriate manner in which he responded because he was arrogant enough to think that he could get away with a lowdown snub like that!

Mike immediately responded in a calm voice by saying:

“Hey, I don’t know who said that, you’re the only one I heard who said that! You know what I mean? And I don’t have a comment to that. You know, because it’s negative…….and you’re being negative…….and I met the mayor, and there’s nothing they can do about it.”

…….it was obvious that Mike Tyson was taken aback by Nathan Downer’s unexpected statement and was feeling very uncomfortable as you can see the adrenalin rush happen right before your very eyes as well as the growing anger that Mike – much to his credit and personal growth as a civil human being – tried his best to contain.

Now after the “The Undisputed Truth” producer Alex Choko sensed the tension in Mike he attempted to offset and diffuse it by continuing to speak on the various good things about their tour when Mike interjected in a calm voice:

“It’s so interesting that you come across as a nice guy but you’re really a piece of shit!”

Check out the YouTube video of the full interview below to hear this comical exchange in its entirety.

After seeing this go down like it did, all I can say is: Assholes of the world BEWARE!

I actually saw something deeper at play here and for those who think that Mike Tyson was out of order then please think again!

While admitting to not knowing the specific background, training and pedigree of Nathan Downer I would assume that it’s not a stretch of the imagination to say that he had to go to school to be in position to have his job in the media and had to jump through the corporate/industry hoops in order to get to where he is and also to stay there.

I would also assume that it’s safe to say that as a Black man – whether he admits it or not – that he had to endure some uncomfortable moments in his quest for the hard earned ascension in an industry that is tough to climb higher in no matter what color one happens to be.

But those who are Black have their unique crosses to bear in their quest for corporate excellence, and to go out on a limb I would say that this clown is a certified ass kisser and those types always have a special resentment for a Black man who is free from those shackles and self made without having to kiss anyone’s backside to make a living.

Action follows thought – so this man I believe went into this interview with a low brewing resentment toward a world famous mega icon whom never went to school to get the untold millions that passed through his hands and never had to bite his tongue for anyone to now being celebrated for living a life that is diametrically opposite from the success plan that he adhered to in reaching what he thought was some measure of success.

…….The asshole inside of him just wasn’t having it!

Some men no matter what, have to be the center of attention and the “big to do” when stepping into a room and very few can upstage even a matured humble kind a friendly Mike Tyson no matter how hard they try.

Trust me, this goes on in the world around us more than you can ever imagine on an unseen psychic level in a twisted game of sizing up an everyone as some kind of opponent before showing them the reason why “I’m superior to them and higher up on the totem pole in this life that they are.”

But what kills a man like this is that when they go down their own twisted checklist of what they’ve considered the attributes of authority,  they come up short each and every time and die a little death from within when they realize that there are many ways to becoming successful AND appreciated for who you truly are without having to play the degrading game of licking another man’s boots to attain a modicum of success in this world.

Mike did what many other working class blue collar people who have to work for a living on a job that they hate but have to go to anyway to pay the bills would have loved to do but couldn’t because they’re shackled to the oppressive slave wage system.

Imagine having a narcissist of a supervisor or boss like this sad example of named Nathan Downer come at you everyday on a job with his subtly condescending and smart ass remarks to unnecessarily create a hostile work environment because of the power trip that he happens to be on because of his deep rooted insecurities?

Well if you’ve personally known this type of pressure rising scenario then Mike Tyson became your champion on this day because of how he stood up to a bitch of an entity whose ego was probably drunk off of the past “victories” of getting away with the petty manufactured confrontations that these corporate punks fancy in indulging in strictly for the ego boost against the financial “little man” that most of us are.

But as domesticated as Mike Tyson may appear in this amusing current manifestation of a man whose in possession of “many branches on his personal tree” may seem, he is at the core who he has always been and if you choose to “go there” you will surely be made to feel what it’s like to battle in an arena that you most definitely have no experience in!

So this strange looking man/punk had the ball thrown back in his court when Mike Tyson took him deeper in the waters of shame that he thought that he could drown Mike in when he asked him “now what are you going to do about it?”

At this point this little smart ass didn’t want to own up to his slight and tried to run for cover under the cloak of acting humane to calm Mike Tyson down.

I guess Nathan Downer has now learned that the quickest way to discover one’s “inner bitch” is to hurl a poorly cloaked sarcastic remark at “The Baddest Man On The Planet” on live television!

…….he only made himself look stupid and it served him RIGHT!

No before I wrap it up, here’s an interesting observation that I’ve noticed when doing a Google background check on the man who will be forever known as that guy who was made to show what he was made of in front of millions who had a good laugh off seeing his ego deflated faster than a crackhead’s bank account after hitting the lottery…….

When I type in “Nathan Downer”, I found only one or two photos in the Google Image search but all of the rest were of him next to Mike Tyson in that interview.

So not only did he get checked, but that moment will live on for an eternity as he and Mike Tyson will be joined forevermore in a scenario that I’m quite sure he wishes would go away and vanish into thin air!

For every person to whom he did this to as well as anyone who he has snubbed, justice was served swift and well by a fearless man who Nathan “Twinkle-Toes” Downer should have known was guaranteed to deliver a first round knockout!

So to all of you status conscious condescending insecure man/boys who never had to walk through any fire in life to become a real man, know that there any plenty of covert Mike Tysons moving about the face of the earth who will not take your games like your inner circle of plastic friends might do while grinning and bearing it…….

……no, they will bring it to you raw in your face and make the world see what you’re really made of. 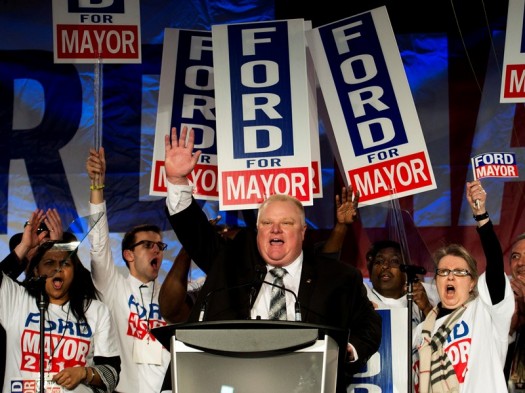 It has happened before and it surely won’t be the last.

But Nathan Downer is now the official poster boy for being a certified prick.

And no matter how much crack Mayor Rob Ford has smoked, the people still love him because he is a genuine man, a rare character attribute that YOU Nathan Downer could stand to learn from your Mayor AND Mike Tyson!