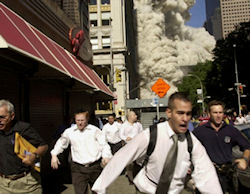 Just like most other people here in America, when I woke up this past Sunday morning, one of the first things that I thought about was about the World Trade Center attacks on September 11, 2001 in New York City. I hindsight I was so glad that I had my last taste of New York before the tragedy just months before on April 5th when I sold my house to relocate into a new life here where I presently reside in Orlando Florida.

When I left the lawyers office in downtown Manhattan after the closing on my former home, I couldn’t wait to get on the plane to come down to Orlando, but then again it might have been more of a feeling of wanting to get away from New York City. To many that may seem like a contradiction but it makes perfect sense to me. You see, by that time as far as I was concerned, the city of my birth and the place that I loved so well had spun out of control. While New York City was always about the almighty dollar, it seemed to me that there was a more sinister feel that slowly crept over the mentality of the people. It seemed to be ONLY about the dollar and not about the old neighborhoods that nurtured us into the people that we had eventually grown into.

The camaraderie left without a trace. The flavor was gone. Something was missing. It was like eating your favorite meal minus that one ingredient that set it off as beautifully as it did. It was like showing up to a wonderful party without your favorite character being absent. It just wasn’t the same.

And while many people had different experiences there, mine felt as though I was really beginning to run hard on a treadmill yet couldn’t move forward an inch. Bills got higher, job security diminished and the everyday joys that one looks forward to on a daily basis were now far and few between.

Many people didn’t catch on to this as fast as I did and some of those same people who said at the time that I was nuts for feeling that way are now asking me how I did such a smooth transition while they feel trapped in a place that treats them like a stranger. What a dilemma!

Thank God I had the intuition to leave before the cost of living had skyrocketed and the last of the carefree living had diminished.

So while I feel sorry for those who are trapped in a narrow existence that is fast closing in on them from every angle like that frightened little tadpole in a small puddle of quickly evaporating water on a hot summer day who is wondering what happened to the lake where they used to swim so freely, I really can’t look back and feel sorry that I made the best move for me.

But was it the best move? You couldn’t tell me any different on the morning that those two planes hit the towers that my relocation wasn’t anything less than a prophetic guru-like all knowing command.

But even after making that transition I was slapped in the face with the very negative traits of human nature that I desired to leave so far behind. I thought the coldness and isolation of living in the greatest city in the world had finally caught up with me and I would find refuge in the warmer climate and the so called hospitality of the south.

Boy was I wrong.

This is America. And as long as you stay within the continental boundaries of this stressed nation you will encounter the same rotten examples of human nature everywhere here…….but for me it was more palatable to be in the illusion of paradise from the perception of more space and anonymity along with being closer to nature.

But when dealing with my fellow human beings down here in Florida I can tell you that there is just as much envy, greed, anger and frustration as there is in any other part of the country no matter what the zip code or accent of the people living there. It’s just a different form.

I must admit that I do prefer this version over living in New York City even though I will always be a New Yorker to the bone for the remainder of my life. I just tend to think of myself as one of those older race cars that have won many championships and can still win the big on but prefers to cool out in the garage all polished up and pretty with only an occasional turn of the key to keep my engine from seizing up due to inactivity. It’s lovely in that respect but to look at the overall picture I would say that the threat to our style of life here in America is not any external force that may wipe some of us out in a terrorist attack but our own lack of decency, character and obedience to Gods will!

Remember how most of the population literally ran to the many houses of worship to pack them out to the hilt on the very night right after the towers fell? Remember that? The preachers not only got and overwhelmed in tithe money but they even received every retroactive offering that many of us were too busy to even think about giving because our lives were to busy for God!

Now let me interject that I don’t believe that giving your hard earned money to an institution that won’t do anything for you in a time of need is necessary nor do I feel that with all of the hunger, abuse and need in the world that God will be pleased with you bringing those very same resources to keep a shyster in a luxury car and a mansion.

Now with that being said, this is what people thought would get them right with their Maker after realizing for a time that this life is truly a gift and that it can be snatched away in the twinkling of an eye before you even realize it!

It was funny to me as I observed Republicans join hands with Democrats. The homophobics thought not to bash gays and lesbians for a time. White racists embraced those of us of color to whom they rejected just hours before. The affluent were made to realize that they aren’t running the show as well as the poor were validated in what they knew to be the truth about humankind all along…….

But after the high amounts of terror that the masses experienced began to subside to digestible levels, we slowly got back into our carnal self serving selfish and hateful ways in record time!

Do we need another disaster to make us understand what a gift this life is or are we just a ruined people all going down into the very pits of hell itself? Look at the world and way we carry on…….we are living in a manner that would make our pre 9-11 selves look like saints! The filthy decadent lifestyles and manner of carrying ourselves are literally off the scale. Do you think that there is no price to pay for thumbing our nose at the very righteousness that we sought when our pompous little asses were scared out of our wits? Heck, if a “little” taste of hell would scare some of us who were living as borderline atheists to seek the so called physical houses of God, then let me ask how soul cutting and shrill will your cries be when you realize that you will be entering the everlasting hell because of the lessons that you purposely refused to learn while on this earth feeling as though your transgressions will last forever?

I can see why when the time comes to face our Maker He will tell us that He knows us NOT!

I don’t know about you but the everlasting life is even more important to me in the overall scheme of things for me to forfeit it because of any of these watered down carnal pleasures here on this earth.