The fact that retired former NYPD Detective Louis Scarcella’s dirty deeds while carrying a badge and a gun cost New York City millions of dollars I see as a definite example of poetic justice.

It may have taken far too long to come to light but at least the truth had finally shined through the lies.

Anyone who has lived in New York City for any substantial amount of time knows that the Police there operate under an entirely different set of rules than those found on Mainstream U.S.A.

To put it bluntly, they are a gang and operate off the books with their own set of unpublished and unspoken rules that are beyond the scope of what we deem to be undisputed justice.

So even though Louis Scarcella has been justifiably exposed as a dirty police officer and detective who has ruined the lives of countless people because of the innocent Black men that he railroaded into long prison sentences, the time that these families lost could never be equated with a monetary figure.

Then when you think of the judges, lawyers and district attorney’s that have worked along with Louis Scarcella in order to frame innocent Black men, only then will you understand the magnitude of what has transpired under the name of the law.

Yet when one cries out about the injustices executed in the Black communities just like those under attack in places like New York City and abroad, you are deemed to be delusional at best and disconnected from reality.

There are many Louis Scarcella’s moving about behind the blue wall of silence, let us hope and pray that we don’t fall victim to the lies that they spread against your character in order to gain another collar in what has become business as usual in the Black community!

Please leave your opinions on this very revealing story in the comment section below. God bless you always and thank you for taking the time to participate! 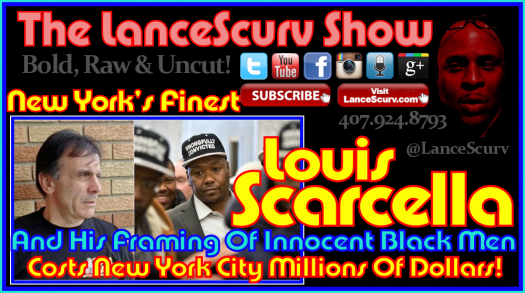 Previous : Two Brothers Dropping Serious Knowledge! – The LanceScurv Show
Next : Are You Seriously Ready To Make The Necessary Sacrifices For Success?

This Policeman is a good man. He worked a job very few of us could do. He protected the people of NYC. God Bless him.

Keep spreading the word. Have you heard of the Kamilah Brock case in which Ms. Brock, an educated, professional Black woman was involuntary committed to the Harlem Hospital Psych Ward in September 2014 because to the NYPD, she fabricated being a banker and that Obama followed her on twitter. While she was involuntarily committed, she was injected with medication. She was considered suspicious by the NYPD who stopped her because she was driving a BMW. While she was stopped, she was accused with having marijuana which was false. However, the NYPD impounded her car and the trouble began when she wanted her car back.

That bastard should be prosecuted to the fullest extent of the law as well as his cohorts, DA, judges, PD, etc. Maybe they should all go to prison and meet their maker! Let the boys oil their pipes 4 lack of better terminology.