It’s been a little over a year (At the time of this writing) since the natural disaster overtook the people of Haiti and plunged so many faceless hundreds of thousands into instant death and despair. And for many living in Haiti, or rather allow me to say most, life wasn’t easy in the first place especially when you live in the poorest country in the western hemisphere. 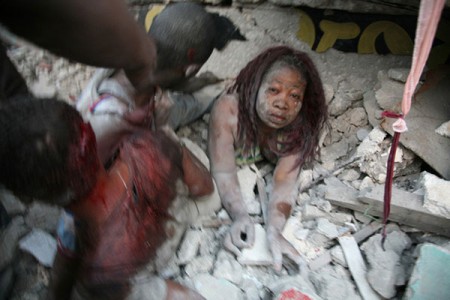 But immediately after the tragedy, our brains were bombarded with the shocking images and heart wrenching visuals that would make the coldest most hardened heart cry out to the heavens for their relief.

The media wasted no time taking us there, showing us an abundance of suffering, the blood curdling screams of pain, the hopelessness of a people who although were used to great challenge and struggle, were just not used to anything as catastrophic as this. But the cameras were there to blast this holocaust all over the entire planet for the world to see and most, including myself, felt that this in effect was a good thing to do because it would prove beyond a shadow of a doubt that the urgency of the situation was something that needed to be attended to immediately as this was as real as real can get!

So here the celebrities came, like the “good guys” in the old cowboy movies riding over the horizon coming to save the day, chests pushed out proud as they took their place in the spotlight to pledge and vow how their consciousness wouldn’t allow them to NOT use their celebrity status to help these fellow human beings in their desperate time of need as time was of the essence. Their words appeared to be so sincere that we all felt that there really was hope for mankind as we thought we saw the coming together of all human beings under the sun as Gods children loving one another and finally all clasping hands together for this great cause whether you were Black or White, Asian or Latino, Straight or Gay, Muslim or Jew.

It appeared that through this unexpected calamity that there would come a glorious new day for humankind.

Yes, this was our moment to show that we in actuality DID have a heart. This was our time to show that we cared more for our brothers and sisters more so than the next episode of our favorite reality television show. This was our season to redeem ourselves to the world and show that we cared more for each other than the latest smart phone to hit the market. This was the time to show that we all were not preoccupied in merely attaining more material goods to die and leave our families to fight over that we, understood that it was our duty to step to the plate and allow our higher selves do what is right in the eyes of our Creator and reach out in every way possible to cause the  aftershocks of this unimaginable nightmare to cease forever more.

To further punctuate how important a time it was, we witnessed three former presidents step forward to walk amongst the carnage of the earthquake in a mighty display of selflessness. Men who, for the most part have been well documented to possess a great divide in their political philosophies and who have in the past gone on record for not only disagreeing with their former opponents concepts on running a country of this size, but personally blasting them in the past!

Yet even THEY appeared to put their rusty swords down on the mantle of peace to look beyond the huge chasm of their individual political philosophies to come together for the greater whole.

“Wow!” I thought to myself, “If George W. Bush could hang out with Bill Clinton then they must REALLY care about a cause greater than themselves in order to do something like this!

According to a recent article in The Final Call newspaper entitled “How The World Failed Haiti” it stated that “Over 50 countries initially pledged an excess of $8.75 billion in humanitarian aid but less than 15 percent ($686 million) of that has arrived…. “

Well if you feel that statements like this are unfounded then why is it that the American Red Cross has raised $479 million for relief and recovery efforts in Haiti but has only spent $245 million thus far? Why are they holding on to the rest of that much needed money when there are still 1.5 million people in Haiti that are homeless and countless others that are STILL without medical care in the midst of the worst cholera outbreak that has impacted 122,000 and killed 2,600 so far? Can disease wait? Evidently so, because we have those in charge who are dragging their feet on this but I’m willing to bet if it were their family whose lives were threatened by a PREVENTABLE disease I am quite sure they would be raising hell to get them the proper medical care.

So after the posturing, promises and photo opportunities have vaporized and the troubled country of Haiti has been left like a crying bride at the altar on her much anticipated wedding day whose groom has abruptly changed his mind and bolted the ceremony, Haiti still continues to suffer while those same cameras that so swiftly covered their suffering have moved on to other stories that would keep their ratings robust to keep their advertising revenue very much in the higher echelon of pricing.

And is that what it was all about in the first place?

Where are those celebrity cowboys who tripped all over themselves to jockey for the top spot in front of the camera in essence getting free airtime off of the tragedy of another almost insuring a higher turnout for their next cinematic project or well publicized book deal.

And what about our former Presidents who had their well displayed love fest with the land of suffering contrasting in the background against their fake ass smiles and shallow intentions? Maybe it will look good for Hillary Clinton that her husband was “in the mix” when she runs for President in 2012 or maybe George W. Bush quickly got his backside down there in Haiti as fast as he did as a measure of damage control for his cold hearted image after showing no concern for the Hurricane Katrina victims.

Is that what it was all about in the first place?

So you mean that there will not be any universal moments of love in a “Kumbaya” moment after all?

Then what was it all about?

In our midst we have those who are only interested in their own self promotion regardless as to the suffering around them, in their mind instead of being an opportunity to serve a fellow human being as a child of God, they see it deep down as a means to serve their career and raise their profile to the gullible who will always be there to believe in these meaningless acts. while I will not condemn everyone who has made an attempt to help the people of Haiti, I will say that there are many who are corrupted when the see a chance to pocket great sums of money unnoticed that was meant for a divine cause. I guess it just might be human nature but I will just call it what it is…….self serving GREED!

When things are running smoothly, even for the poor, everyone seems to go their way living their lives on their own seperate planes oblivious to the rest of the world. But when catastrophe hits, all of a sudden those same spiritual vampires will swoop down like the vultures that they are to salvage the remains of anything of value for their own purpose. And while I don’t think that those who have been identified as vultures really needed anything material from a place as poor as Haiti, I say that to them it is probably one heck of a career boosting photo op to say the least.

But why should the American government really care for the poor “insignificant” people of Haiti? They are only in the way because in the grand scheme of things, the American government wants Haiti so bad for themselves because strategically it is sooooo close to Cuba! Think about it! Doesn’t it happen here in America when a downtrodden neighborhood is targeted for gentrification? The drugs get everyone selling locked up. The crime scares everyone else away. The disease kills the rest off and whoever is left over is just plain crazy and unable to stay or support themselves. The earthquake in Haiti was just another “chance” opportunity for the United States to get quicker what they really want in the first place.

It fell right into their lap!

Think I’m crazy, I BET you that we will be having this SAME conversation NEXT year!

Previous : Drama Specialists: How They Work To Destroy Your Life And How To Nullify Their Secret Attacks Before Its Too Late
Next : The Miracle That Is Congresswoman Gabrielle Giffords And The Issues That Her Tragedy Has Caused Us To Face