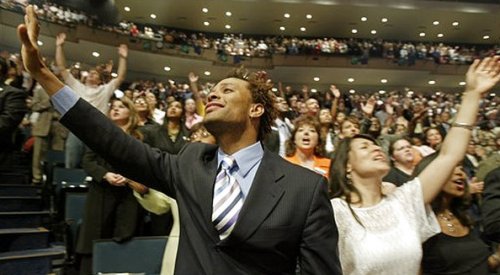 The Black churches here in the United States America from what I see have been ineffective in reaching our younger generation. Look at who is filling the seats of the congregation and pews of our local houses of worship. You see nothing but women (single, widowed and divorced), older men and effeminate men, if any men at all. Why doesn’t the church attract the masses of our targeted young black males?

Why is it that the prosperity preachers can gain the respect and attention of the affluent but don’t seem to have a sense of urgency to go into the troubled segment of our communities, to save the destructive spiral of those who are supposed to inherit OUR life’s work and legacy?

Many in the church “distance” themselves from the hardcore realities that are broadcast every night on the news programs, featuring our lost men and women who have been failed by our holy institutions. Institutions that openly boast about how their membership grows, but can’t boast how they are just as effective in lowering the sad poverty, illiteracy and crime statistics, that reflect how much of a failure they have been in those very same neighborhoods. The churches dysfunctional denial has definitely kept them shielded from the pulse of what is truly transpiring right in our very neighborhoods.

Seems to me as though we had more love and concern for each other as slaves on the plantation, catching hell from your beloved slavemaster, who you still jump for to this very day in his corporate plantations! You feel blessed to now be free, but you are no more free than those who walk down O.B.T. at night, desperately searching for some cash by any means necessary for the next hit crack. Am I lying? No! You are a slave to that high interest rate mortgage that you are stuck in. You are a slave to that high car note, yet don’t have enough cash to pay for gas. You are a slave to that internet pornography, secretly playing with yourself late at night but will show up in service with your nose up in the air. You are a slave to to the job you are scared to lose, because you have not thought how to make money OUT of the box! Scared that everyday could be your last! So don’t act as though you are not ruled by someONE or someTHING! You just hide it better!

We are as strong as our weakest link. But many preachers/shysters who care not about the next generation are hardly concerned about that fact, as long as they can sell those same mothers who support their lavish lifestyles a dream that their sons and daughters will be “alright” while incarcerated down at the local Jail or State Prison and that “miracles do happen.”

Keep praying they say, while that same mother drops tithes and offerings regularly and diligently making YOU know, as a representative (pardon me for calling you that!) of our Creator, that miracles ($$$$) do happen….

Sure! It’s easy to say this while you count her hard earned money that she worked two jobs for, that should be there for our young when the teachers at school are not! Money that should be there to keep the church lit, heated and well stocked with nourishment while us luxury car driving “so called blessed examples of God”, extend ourselves with a sense of urgency to those that need those resources desperately.

These kids that are lost now will be the so called prison population inmates of tomorrow. You look down upon them because they want the finer things in life, while barely surviving in the gutter. Where do you think they get the idea to want these cars, homes and jewelry? From drug dealers alone? They hear you every week down on your knees praying to God for a bigger house. But the house you already have you can’t handle. You pray for a newer more expensive car, but the one you have now doesn’t break down or give you any problems. You want the excesses of this world but you could never extend your heart to your brother/sister in a way that will instantly open Heaven’s gates, allowing you to possess God’s superior riches.

Sure church, you’ve reached our young people, but you’ve given them the wrong message indeed. And they can sort of pick up that you just don’t care. They need you but your lust for money, status and power seems to be of greater importance than how we groom and support our young. So when they find the attention that they have always craved from the street corner merchant of illegal pharmaceuticals, you curse them as though you did not have a hand in their conditioning…but you did. 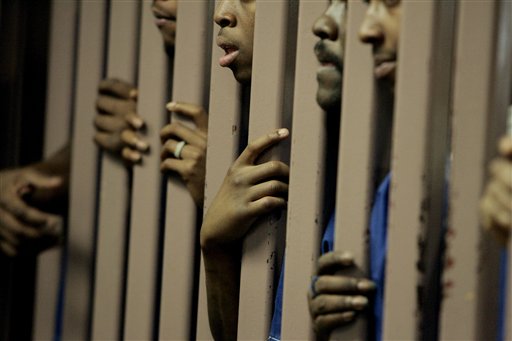 All over America, we see OUR forgotten Black men — unemployed, frustrated, hurting and demonized by an unbalanced/unfair racist media, while the landscape is infested with churches and houses of worship, that do not reflect the trouble that our communities are in. Do you know that if Jesus were walking the earth in the flesh that He would be walking down the mean streets of the ‘Hood reaching out to the poor people who live there? So why are you too GOOD to do the same?

Jesus would be seen right there on “Hoe Stroll”, late at night on the bus stop, encouraging and schooling HIS Brothers on how to defeat the devil and live a clean, rewarding life! That’s the job that WE must do but most holy rollers are too concerned with church gossip to “lower” themselves to deal with the issue of the damned!

Jesus would hang out with the Brothers playing cards at the park, just to show the downtrodden that He is cut from the same cloth that they are and possibly raising their level of consciousness to become all that God had created them to be– upright men on this beautiful earth. How are you as Christians going to accomplish this when you are only worried about the building fund?

Jesus would often be seen hanging out in the after hours spot, telling Brothers NOT to believe the lies told about our neighborhoods in the slanted propaganda laced newspapers or the anti-Black propaganda evening news. (And really WHO decides what is a bad place to live and what is good? The same lying devil who tells you HIS neighborhood is better?) Jesus would say to keep our neighborhoods clean and respectable for our young, creating a Heaven on earth! Too many of the very Black (Sorry if I called you that!) Christians are too busy trying to move away because they have believed media lies….moving away when there is a divine job right HERE to be done!

Our PEOPLE are the forgotten houses of the spirit of God, not a damned brick and mortar building that looks great on the outside but houses greed, lust, and a power hungry congregation from within! We worship the physical temple yet scorn those that the temple was made to serve! How backward! Our Black men NEED us! What excuse will you offer up to your God when it is time for divine accountability? Whether you know it or not every beat of your heart brings you closer to this time…..

It is human nature to seek pleasure when one is in great pain. So with the tremendous burden of pain in our hearts to want to BE men when our felony records have us like tagged pigeons and unable to secure a good “job”. We escape by drinking, whoring and getting high! A good high is NEVER too far in the poor Black communities here in America! Weed, Crack, Liquor, Ecstasy and Sex are here in unlimited supplies! The only sense of power we sometimes can feel through the pain is the power of holding a gun or our genitals! Why do you think that either is never too far away from the grasp of a downtrodden Black man? If your church was so good then why aren’t we learning to put those substances and situations down in exchange for what you say is so good? There is something wrong with this picture indeed.

Don’t you know it is easier to train the branches on a tree when it is young? You could have made a difference, but guilt makes you scorn the way they turned out as though they chose this. Many HAD no choice! Some did and didn’t realize they could make it another way. And admittedly, there were those who knew better, had many options but were too lazy to seize the opportunities that were available to them. Regardless as to what the origins of those sad choices were, the fact of the matter is that it shouldn’t exist in our neighborhoods at all! It should be banished out of sight forever. But, until we detoxify our holy “churchified” asses of the business and profit margins of the man made religions, we will continue to reap the benefits of what we have sewn too long in our own backyards.

So next time you see the poor, ignorant so called “undesirables” who you want to look down and scorn, while you temporarily enjoy the fleeting moments of superior grandeur that come from the ego satisfaction of material intoxicants, realize that He who gave it can so swiftly take it away .. and that maybe your job here on this earth is to guide that lost one or show him how to make it in a world that profits from his downtrodden condition. Falling out on the floor in the spirit means nothing if we cannot get out to TEACH, GUIDE, NURTURE and SUPPORT our young men and women, impregnating them with some sense in this satanic world! For we have been praying TOO long for change in a situation that continues to get worse by the day!

Imagine if God looked down on you the same way you looked down on your lost Brother in the streets, as you drive your brand new Cadillac down the boulevard to get to the service in time, to stuff your toxic gut with Potato Salad & Pork chops afterward! You “lock” your car doors when a downtrodden Brother who looks like he could be related to you gets near but what if God locked his “Pearly Gates” if you approach them after enduring a challenged life FULL of adversity?

To sincerely reach out might KEEP your name written IN the book of life! Otherwise, from what I can see, the Brothers and Sisters out here that you put down have a better chance at Heaven than you do. They have an excuse, but as a so called Christian, what’s yours?

Previous : If You Know The Truth Then What Are You Afraid Of?
Next : Never Cancel Your Appointment With A Rainbow

I am with you 100% Dan and have often thought the same thing also. What will it take for us to truly wake up?

I wish we could just stop all these building projects and private jet acquisitions and focus on what really matters- loving people!
Loving them with our time , energy and resources.
I just don’t know how we can go on justifying these material acquisitions that have no direct or indirect impact on peoples lives, especially in these difficult times. It’s like we church folk are under a spell. How can we not be touched by the sufferings of people around us.
I advocate for prayers and righteous action to destroy this satanic trend.