At one time Valerie Bell, Lesley McSpadden and Sybrina Fulton hadn’t a clue who they would be to each other as well as the common bond of pain and loss that they would soon experience and come to know.

Who are these ladies and what bond do they share?

Well, they all have lost their sons to the senseless aggressions toward them by the bullets rained down on their unarmed souls for nothing more than being a Black male in the wrong place at the wrong time.

First, there was Valerie Bell, the Mother of Sean Bell, who was murdered by the New York City Police Department on the day that he was supposed to be married.

50 bullets fired for what?

Then you have Sybrina Fulton, the Mother of Trayvon Martin, who was killed after being followed by the wannabe cop George Zimmerman for nothing more than being a suspicious person who was guilty of no crime whatsoever.

Why did he have to die from the bullets of an insecure punk with control issues who suffers from low self esteem and a short man’s complex?

Now we have Lesley McSpadden, whose emotional wounds are the fresher of the three but now has the blessing of being comforted by two other Queens who will hold her hand in a special way because they truly know what she is going through.

How was it possible that these three be together at this time of loss for Lesley?

Well CNN arranged the gathering for an interview with Don Lemon.

While we all know that most televised media outlets will do just about anything for ratings, I believe that it was a great thing that they did this time around because it displayed our unity and love for one another in the midst of a major tragedy. 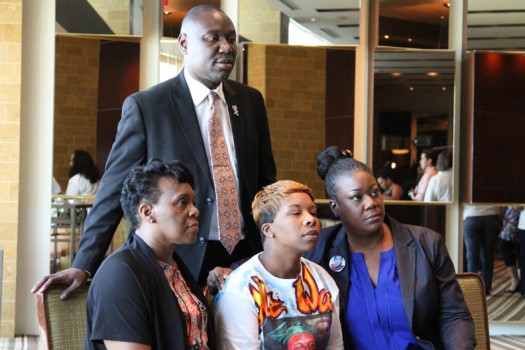 To show our Sisters and Mothers in such a healing light was wonderful because in comparison to how many will display us, this was a bright ray of sunshine piercing through the clouds of the hurricane of decadence.

While I will definitely include the link and video to their verbal exchange here for all to hear, I really wanted to share my thoughts on what I saw between them as they all took the time to share their tragic stories for the world to absorb.

The main vibration that I want you all to focus on was the frequency of SISTERLY LOVE.

In this day and age where the masses can’t seem to get enough of seeing Black women on YouTube and Facebook fighting each other in the streets until either one of them is nude or hurt or both, this really is an aspect that we should focus on as we move into the time period of us as a people being attacked with an ever increasing frequency as we are moved into the age of government backed modern day slavery.

The love that these Sisters showed to each other is the love that we had back in slavery.

If we didn’t have this unconditional love for one another then there would be no way that we could have made it out like we did to be the survivors that we are today.

The sad thing is that while we as Black people have always had our challenges with self hate, never before have we had to deal with it more than now and if you ask me, it is worse than it ever has been and I believe it is partially because of the lack of Sisterly Love that we saw in abundance on this August 25, 2014 in the interview with these Queens who lost their sons.

Think about it, after slavery and all during segregation, we didn’t possess any high hopes of integrating with those who couldn’t stand the ground we walked on so we built our communities up for ourselves and made do in a way that was nothing short of phenomenal.

What was at least one of the reasons that we as a people could accomplish such a major status in such a short period of time after several hundreds of years in captivity?

It’s because of the Sisterly Love that we had – especially as men – in our midst that was the backbone of the strong communities that we built even though the threat of hangings, killings and rapes hung over our heads at every moment that we inhaled.

As Brother Minister Louis Farrakhan has so beautifully stated: “A Nation Can Rise No Higher Than The State Of It’s Woman”, this enemy in high places knows that to attack our Sisters and have them hating each other in their broadcasts of us is to set up the Black community for a fall in what would be eerily similar to a controlled demolition that would bring our final demise.

Aside from the wonderful display of Sisterly Love that CNN so beautifully displayed, you would be hard pressed to find a program that showcases Black women not fighting, speaking ill of each other as well as attempting to bed down each others ever so willing husbands and boyfriends.

This is the type of subconscious conditioning that is being fed to the young minds of our daughters, and this signs off and approves of this type of behavior so that they will believe that to act this way is acceptable.

While I frequently go in on the major media networks for the buffoonery they usually promote and profit from, I have to give credit where credit is due in this piece that featured the beauty of Sisterly Love amidst the degradation of the Black women into a hateful combative loud self centered selfish gold digging morally bankrupt harlot.

If we are to survive this covert attack on our race and community, we are going to have to take the time and build up our Sisters who are unaware of what is actually taking over their minds and slowly siphoning the sense of connectedness and spirituality from their souls.

This my friend will take lots of patience because to deal with the wayward of our Sisters successfully means that one will have to endure and absorb their resistance into their restored mind as they will not initially want to change their thinking.

But it’s not impossible and when I experienced Sybrina and Leslye sitting on national television together to bring comfort with their presence to Valerie in her time of great loss, it let me know that there is hope and that one day we will be back to where our Creator wanted us to be.

…….and what a glorious time that will be when we all can truly love and support each other to bring a state of Heaven to this Earth!