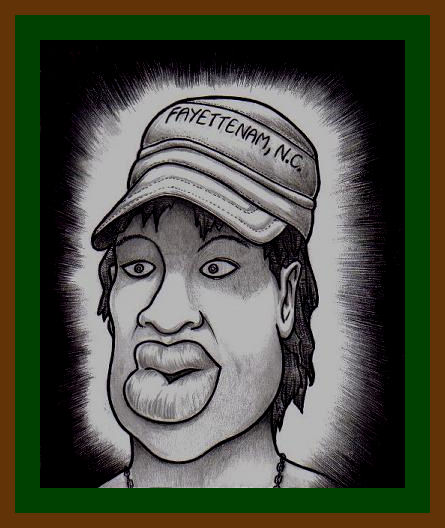 Fighting the war in Iraq has changed my perspective in life on so many things.

I was just a big boned energetic and friendly country girl out of Fayetteville North Carolina with a slight weight problem when I signed up for the military and believed all of the great promises that my Army recruiter gave me on that fateful afternoon at the shopping mall. The money for a college education, and a new direction in life much different from those that I started to hang out with after I barely graduated out of high school.

I wouldn’t say the service was all bad, but I wouldn’t recommend it at this point to anyone.

When I thought I was giving something to my country and would reenter civilian population embraced with open arms after serving eight very intense yet well decorated years…..I was made to feel as though it meant nothing at all.

In a way, I was looked at as the criminal because of the war!

I am not the one giving orders, I only follow them, so you better talk to your government and that clown Donald Rumsfeld about that, and see what happened….when things got hot even HE had to resign! The military is so full of control freaks like him. They can’t control their own wives and households but they seek positions of authority so they can feel superior over others and give them a hard time. It’s a start and things will be better without him.

You know, it ain’t easy being a woman in the military, you think those men who serve with you would be noble and of higher moral standards…..some may be….but most are just like the dogs that I thought I left behind back home on the street corners. I realized that everything that you can find in any “hood” across the country, you can find around a military base…..liquor, drugs and lots of prostitution.

I couldn’t believe how these men drink and party so much!….It was like they only had one thing on their minds. They couldn’t even stand at attention right from being up all night boozing it up and chasing these disease plagued women.

One of my close friends on base is a nurse for those same soldiers and she tells me who comes there all the time for S.T.D. pills and shots. And after all that you think they would learn….and with all of these women on and off base who are sexin’ it up with them, you would think they would leave me alone!

I could have gotten so many soldiers in trouble but didn’t want to make waves, you know, tryin’ to be a good soldier and think about the higher cause. But looking back now, I should have put papers on all of their asses!

It’s bad enough I lost a few close friends who were killed in combat and caught in the way of bombs blowin off….those were the real gems out there….I feel so bad for the loss their families have to deal with so I still try to keep in contact with them. A part of me feels guilty for being spared. And another side of me asks God why WAS I spared. Why wasn’t I killed like the wonderful officers in my company?

What is my mission now?

When I came back home to my Momma’s house here in Fayetteville to readjust myself and rest, I just stayed in my old room for days on end. She doesn’t understand. She probably never will. I hate to see her stressin’ over me like she does. I’ll be alright in time. It’s not a depression that I am going through but sometimes I don’t know what to do with my life now. The Army was all I knew.

What do I do now?

The people who reach out to me to forge friendships really don’t interest me because they truly can’t understand the unfinished business that I have deep in the back of my mind. A part of me wants to go back. That’s my struggle but the camaraderie is not there anymore with the new soldiers. All they care about is getting an award before the next man or woman.

I also thought that this damn country would have grown up by now…..but instead of seeing a hero in me, many just see me as another nigger bitch with huge soup coolers to get some quick thrills from. I am so much more than that. I just come away with the feeling that I should have so much more than what I have now. Is there anyone out there that feels the same way? Please help me, I’m a young woman in the lonely valley of decision!

…..Sgt. Caroline “Big Essie” Jones, 29, A Fayetteville North Carolina Army Vet with an Honorable Discharge who contemplates what her life will be outside of the military she has grown to miss yet somewhat hates at the same time. Hers is a story that for the most part usually goes unnoticed.