As I drove into the parking lot at work earlier yesterday, I was a bit shocked to see how empty it was as though it were some kind of holiday that I wasn’t aware of. There were no tight spots to squeeze into after searching the packed lot the way I usually have to, just an endless sea of available places to park my hooptie to then begin my work day.

Well, nothing was wrong at all! And if you asked anyone else that day who was the one that had something wrong with their head it would be me! Why? Because I guess I was the ONLY one who forgot that it was Superbowl Sunday! Now you are probably saying;”Scurv, what planet are YOU living on and what have YOU been smoking?”

Well to answer to answer that honestly, and you don’t have to believe me but the fact of the matter is that I don’t follow Football. To go even further, I don’t follow team sports at all! None. Nada. Zero. Zelch. Why? Because I just can’t take playing a game giving one thousand percent effort while someone else gives only twenty five percent but gets to stand proud as a champion on the winning team after an impressive victory on the backs of those who busted their backside for the win. I hated that! So this is why I really got into the sport of Boxing and Bodybuilding growing up. The last time I can remember playing Football was on my old block on 134th Street with my friends off of the block in Queens, New York. I was pretty good at it and some have said that I could have gone far in it. I knew one thing, I could run so fast for someone who got thick from lifting weights so young. But I was intrigued by a sport where the pressure was on one man to win and if he lost HE would have to bear the weight of it. That really turned me on and got my competitive juices flowing!

After I started my driving day on the bus route, I was bombarded with the same question from so many people that couldn’t have been more different in their background dynamics. What was the question?

The SAME exact question was levied at me from an old Black man about seventy five years old with gray hair (Lookin’ like Pop Staples from the Staple Singers) who had an unlit cigar in his mouth and dressed a little to heavy for the humid Orlando afternoon.

That question AGAIN from a White gay dude who looked as though the mayonnaise from his Subway sandwich spilled all over the front of his shirt. But to be honest I HOPE that was mayonnaise and to tell you the truth I truly believe it wasn’t! To each his own.

Yet again from a young athletic man who looked to be about sixteen but who thought he was a man by the way he pranced on the bus with his overdeveloped girly friend who I am sure will break his heart because of the wandering eye that she obviously had.

In each instance I was taken aback because I really didn’t know how to answer because I didn’t know who was playing to even bluff my way through. And everyone who asked me this popular question thought I was putting on and playing mind games with them. But nothing could be further from the truth. What a day I had……. 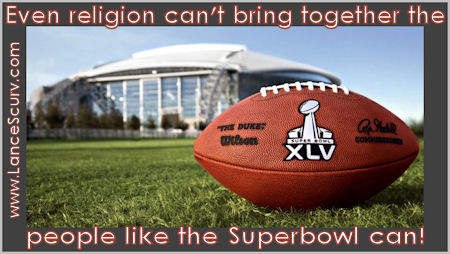 But I began to think of how diverse a grouping it was that was into this game as though their life depended on it. I saw the power that the Superbowl had to bring so many people together that might otherwise see themselves as different with nothing in common. I saw Black, White, Asian, Gay (with mayonnaise, lol!) Young, Old, Republican, Democrat, Rich and Poor forget their “skins” and join up as one to enjoy this event as a people who had a common interest and love for something that helped them all to escape the realities of these trying times.

Amazing to say the least.

Here we have a happening that only transpires once a year but has the power to vanish all perceived lines of separation between a people who have more divisions than any other people on the face of this earth! It would be wise for those who claim to be the followers of Jesus Christ who call themselves “Christians”, who with their over two hundred and fifty documented “sects” of separate divisions, STILL can’t decide which is the proper one, yet a sport will have the power to supersede a religion that is man made.

Here we have a mere game that shuts down the entire country in unity but our Presidential elections have campaigns that are more vicious, divisive and aggressive than any Ultimate Fighting Championship combat match have EVER been!

Can THEY bring together the people of the United States like The Superbowl Party can?

I say let’s all form a NEW political party called the Superbowl Party!

They would surely do better than the tired old political system that we have now that everyone seems to argue over and appears to be highly ineffective. Why not? It’s worth a try. It shouldn’t be a problem getting this party up and running because the Superbowl Party would have their convention nowhere else except at the Superbowl! The only pressing issue is that the Superbowl and also the entire Football season would have to be moved back a few months to coincide with the other political parties conventions.

But while the old school more traditional politicians would complain and say that beer would not be an appropriate beverage on the floor at Capitol Hill, I say that neither are the kept women AND men that these adulterous public servants maintain on taxpayer money is either! I’d rather a bunch of happy beer guzzlers who are showing love for a game than a bunch of elected official pedophiles that are showing love for each other by covering up each others sins!

Although I now know nothing of the games technicalities or even have a taste for it. I can truthfully say that if there is something that can bring together a cross section of Americans so well that are as different as night and day, then THAT power needs to be bottled, stored and sent all over the world to all of the countries at odds with the neighbors and from within. Send some over to North Korea and watch the division between the north and south melt away before your very eyes. Send some over to Palestinians and watch the love flow between Israel and the neighboring Muslim countries. Send some to the Shiites and Sunni Muslims, and watch a new day begin on this earth!

Heck, I would settle just for only ONE DAY of the peace, love, tranquility and unity that was felt at the Superbowl yesterday!

At least that would be a wonderful start. But one thing is for sure, there IS hope for humankind no matter HOW messed up this world can appear in these troubled times. If we take baby steps toward World Peace and start with the love shown yesterday and build upon it and allow it to spread, this world would truly be such a wonderful place to live!

Life is too short to wish for anything else…….

Oh! Congratulations to the Green Bay Packers for their 31-25 win over the Pittsburgh Steelers!

See? There is hope for me also but I bet you that I will make it a point to know who is playing next year.

Previous : Tranquility And Solitude Come Effortlessly Once Your True Purpose In Life Is Discovered
Next : The Gantt Report – Reform in Egypt