Tragedy and crisis will make the world see what is hidden deep inside of a person and a community in a very swift manner.

One would have to be living on a different planet to not know that the Japanese people have had to endure a seemingly insurmountable event in the form of record breaking 8.9 earthquake and the devastation of a  subsequent tsunami that was the finishing blow on an already shocker of a natural disaster.

While it is such a tremendously sad thing to see people perish and the looks of despair on the faces of their surviving family members, there is a unique deep beauty that I see in the people of Japan that needs to be acknowledged by the world.

What I see in them as a people and culture is a quality that is sadly lacking here on American soil. Yes. I said it. What would you have me say? This is what I see and I am going to tell it like it is but let me backtrack for a moment. So many Americans are so caught up in this place being the epitome of quality living when in fact there are several countries containing societies that are so far superior that the glutenous slothful greedy inconsiderate mentality of those who patriotically bolster American culture as though it is something to really brag about. The only thing here that is superior to anything on the planet is that you will get a faster smoother stylish ride straight down to the bottomless pits of hell in record time!

Many of the tourists that I have spoken to down through the years here in Orlando and up in New York City (Where I was born and lived 38 years of my life)  just couldn’t believe how filthy a society we are especially when traveled off of the beaten path of the tourist areas of deception. This country is like an amusement park built right next to a ghetto, you must stay inside the confines of the established “play areas” in order to not get a rude awakening as to where you really are and what was set up to give you the illusion of a great time amidst the suffering of the poor disenfranchised people that could never afford to attend the “party.”

While every country on the face of the earth has its issues and things to be desired from within as far as improvement, Japan always has been and will always continue to be one of the premier lands on the face of this earth as far as a people really trying to exemplify what our Creator desired for us in the highest development in humankind.

So why am I talking about this in the wake of such a disaster when I should be speaking about the disaster itself? Well, first of all, why should I attempt to do the job that the news channels have excelled in doing as far as bringing you the numbers and the facts of this sad time in Japan?

That’s not my job nor my forte’.

What I want to share is the fact that there is an honor and respect there in the hearts of the Japanese culture that seems to be unattainable here in America. Not one time on the news reporting stations have you seen any form of looting or violence in the turn of events there. All you saw there was a controlled unified effort that exuded an immense dignity that made me proud to be a human being! They got right to work in order to save lives and preserve what they could as quickly and as efficiently as possible.

I cringe to think what would happen here if there was an earthquake that powerful to hit a major population hub as it did in Japan. Imagine we had an earthquake in New York City, now I’m a New Yorker from birth and know that part of the country probably better than most reading this blog. And while I know thousands of wonderful people there, I also know some individuals who you wouldn’t dare want to be on the same side of the planet with. Now even though I won’t demonize an entire city because of the track record of a few, you have got to understand the dog eat dog mentality of many New Yorkers who are feeling the weight of this recession and obvious poverty.

It’s not an excuse, it’s just an observation.

I could go more into that point but I won’t for the sake of brevity in this blog. But imagine an earthquake in New Orleans, Louisiana? Now I know how my people there suffered but where in the hell was that Brother going with those few stolen Heineken bottles in water that was waist high? What an asshole! He should have been looking to help someone but all he could think about with his big receding hairline and damaged hair from a perm attempt gone bad because he thinks he is somebodies pimp is to grab a few beers and (Notice how he put one more bottle in his back pocket as though that extra one was really going to make a difference!) that is all it took to make the nigga happy! And you wonder why ALL OF US get looked at that way like we ALL are expected to carry on in such a manner, it’s because of assholes like him! Look at him, got his damaged hair permed lookin’ like somebodies “GHETTO CHEWBACCA!” That wasn’t everyone, but it was the few knuckleheads that CNN and FOX NEWS whose images they chose to blast to blast all over the world! But trust me, it was a whole lot MORE than just a few!

Imagine this happening in Detroit, Chicago, Boston, Los Angeles, Dallas, Memphis, Atlanta? Imagine the buffoonery that we would go on with on the world stage with every member of the human family looking on with disgust forming a strong opinion as to our character because of how we acted under the stress of a tragedy?

Yet, in Japan there is a unity that is a textbook example of how one should react in the time of crisis. It doesn’t mean that there aren’t a few bad apples over there, dear Lord, you didn’t see them carrying on like we here in the States would. You know why? The have a righteous pride instilled in them from young. They know who they are and have a strong sense of connectedness between them. If one is hungry they ALL are hungry and they will not stop until every last mouth has been fed. Isn’t that beautiful? It’s a beauty that I had hoped to see over here in America but since it doesn’t appear that it is going to happen anytime soon, I am looking forward to turning in my citizenship here in this melting pot…..I mean shitpot of a country to at least know what it is like to live somewhere else where I am judged by the content of my character!

I guess this is why so many people who have traveled in the military all over the world have no problem living and marrying outside of the circle of all that is American.

And speaking of the military, isn’t it amazing how the Japanese military got right to work to help their people? Hmmmm, it’s not like the agencies that took days to get “some” help over to New Orleans, Louisiana and demonized many of the people there calling them refugees! Imagine, aren’t they NOT American citizens too? Do you think that the Japanese authorities would get caught KILLING their own people? It works both ways, while I mention “some” of the looters that were out of place, I HAVE to mention the corrupt Police department there that did a terrible job of doing what they were paid to do.

Hell, if they didn’t have such strong earthquakes over there in Japan I would surely live there in a heartbeat! I once read that Japan purchases over forty per cent of the luxury items sold worldwide! For such a small nation they are definitely movers and shakers over there! I wonder if THEY have a sagging pants problem over there! I think not! 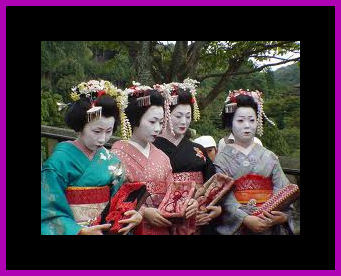 And while in Japan they put a high premium on their culture and higher learning, we here in America purchase over ninety four percent of the hard drugs of the world but are only six percent of the population! Talk about a crackhead nation!

On another note I must say that you will NEVER see a Sarah Palin equivalent spring forth into the national spotlight over there in the east. It just won’t happen. I find it so funny that we are told that we should be patriotic and defend the rights of this country when we have grown adults arguing like kids over who is a Democrat and who is a Republican, who is from the North and who is from the South, who has no money and who is affluent, who is old and who is young, who is lighter and who is darker…….DAMN! You Americans have got to get your acts together and try to get all of your dumb asses back to GOD!

You can’t go to God with all of this foolishness in your hearts…….and all of these so called Christians in this country who go for this foolishness of separation with over 253 plus documented sects of Christianity won’t see Gods face to tell Him how divided you have lived your lives. God will smile down on those who carry His spirit and live in the manner of our Japanese Brothers and Sisters who wouldn’t think harping on a difference when there is so much in common to be celebrated between them. Sure, they may not have so many different issues to overcome like us over here in America because from what I see and what I’ve heard, they only really deal with the issues of “class” and “sexism.”

As time moves on I am seeing the divine universalism of our existence and not under the narrow scope of what we have been taught here on these shores by an oppressor through slavery and their “Universities of Indoctrinated Subservience & Quote-ology.”

We need to truly learn from the example in this time of tragedy of the Japanese people and question what we are made of internally because if these people can act and perform under such stress on a level of high excellence then what is our excuse for acting like the fools that the world sees us as when we have so much to be thankful for? There is no excuse for this and when it is our turn (And it’s coming soon!) to deal with a crisis in our midst what the world observes will solely depend on what we do. And this time we won’t have anyone else to blame except ourselves…….

In the meantime we can pray for the comfort, restoration and peace of mind for the exceptional people of Japan, I don’t think we have become THAT slothful where we couldn’t do that small gesture even if we do steal beers here in America! LOL!

Previous : Whatever Happened To That Little Old Church Lady Who Used To Sit In The Back Of The Church Who Always Made Us Spit Out Our Gum When We Were Kids?
Next : The Funny Pages – A Hurricane Katrina Victim Speaks Truth!

They are an interesting and collective group of people. Maybe some of us so-called Blacks can draw from those values we USE to known for. We have the opportunity to rebuild like Nehemiah