@stephaniebabe93 tweeted, “I know every black female looked at gabby douglas’ hair and asked Why? Just why?”

@MessyMeil said, “So for real though nobody wanted to go to London to do Gabby Douglas’ hair?

All I can say is WOW!

The focus and twisted comments on Olympian and Gold Medal winner Gabby Douglas’ hair truly reveals a deep sickness in the mentality of Black women!

First of all allow me to state that I, for one, love ALL women but have a special place in my heart for Black women and the special mountains that they must climb in this world on all three levels of existence – mentally, spiritually and physically.

I have that special place in my heart for them because of the parallel walk that we must endure and for the special comfort that we afford each other as we experience the common trials and tribulations that we know of so well in this place called the United States of America.

That being said, I was truly disappointed in my Sisters as well as others who had something demeaning to say about what her hair looked like after her Gold Medal winning performance at the tender age of sixteen years old. Technically and on all levels, still very much a child.

How cruel and how sick and I must say that I cannot identify or make any excuses for any of you who had the nerve to move your mouth to say anything ass backwards negative about an inspirational young lady who has accomplished more in her life even BEFORE becoming an adult than most of you will EVER do even five generations down into your bloodline! 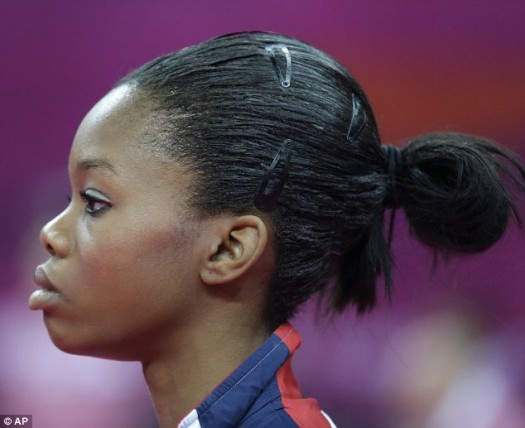 Enough is enough and I for one am through with enabling and making excuses for such a dysfunctional mind!

Just because YOU might have the sick mentality of thinking that you are nothing unless you fry your hair and poison your systems with those dangerous and highly unnecessary hair relaxing chemicals, then don’t attempt to inflict THAT same backward mindset on one who is poised to conquer the world and in a sense already has!

As a matter of fact, as the Bible states: “And a child shall lead them” is such an appropriate verse to really unlock the truth of the moment because if half of you would even STOP letting your addiction to these self hating practices dominate your lives as it has, maybe YOU would venture out into the unknown territory of moving out of your comfort zone into a healthy routine of exercise but many of you would NEVER do that because to sweat would mess up your brand new “expensive” hairstyle!

So you would rather cling on to a sedentary life of hitting up the all you can eat buffet spots with a gut hanging out over your knees like a pregnant kangaroo all because you don’t want to damage your new hair-do!

I’ve seen some of the most incredibly detailed hair creations sitting on top of a head that has NO sense IN that same head because of the foolishness that comes out of their mouths! ……and YOU think that makes you look attractive?

Not only is it a waste of time, but it is also a waste of money! Some of the poorest neighborhoods support some of the most lucrative hair salons because of the sense of hopelessness in those same neighborhoods and the need to feel as though one is a “star” for a short while by getting some flamboyant hairstyle to parade around in an impoverished area that looks like somebodies war-zone instead of saving that money to invest in something as worthwhile as an education or some real estate to have a roof of your own over your head instead if dooming yourself to paying rent to someone else who will continue to exploit the ignorance that you so readily wallow in!

So now instead of you allowing this once in a lifetime phenomenon – who happens to resemble some of the very people who are her most animated detractors – to inspire you to do better, you unleash your lethal venom of dormant self hate onto one who has shamed your lazy narcissistic going nowhere self and has driven you further down into a darkness that will never allow to to relate to anyone as a healthy human being who can embrace the full spectrum of life because of your time consuming preoccupation with your hair.

Now granted, it appears that Gabby’s hair may be relaxed, but I really don’t know this for sure but it sure is irrelevant at this point because the point is that it is, she didn’t allow it to STOP her from focusing on a goal and achieving it after making a lifetime commitment that wasn’t guaranteed but she took those first brave steps from the tender single digit ages to manifest into the greatly skilled high precision machine that you see today that is a wonder to watch while you can hardly bend down to pick up that nickel that dropped from your grasp after paying for that shopping cart of pork laden “food poison” in the supermarket that you dump into your body while sporting your hairstyle at the same time!

You really ought to be ashamed of yourself for revealing to the world how sick your mind really and truly is, and you wonder why no one takes us seriously if it involves any endeavor other than buffoonery or entertainment because that is all we put any value on.

But it truly is not an isolated incident because I see this venom of self hate executed every single day of my life! Many are so used to it that they take this behavior as normalcy but also as a desirable common mindset. For some Black people to show love, respect, kindness, patience, encouragement and support is just as strange as seeing a dog talking on a cellphone and walking on its two hind legs in the street.

This is the beginning of the end for us when in this day and age we go after one who should make us feel good to be one of us as the world embraces Gabrielle “Gabby” Douglas even more than we do. We talk about racism from others but we seem to find it acceptable to shower our own with a level of hate and venom that would make any Ku Klux Klansman proud!

…….is this what we’ve gone through hell and high water in this country for hundreds of years just to come down to possessing a mind that focuses on the superficial foolishness and not the forgotten mission of uplifting one another at hand?

You are telling me that you are putting MORE EMPHASIS on a few misplaced strand of hair over a stellar historic Olympic performance whose record should stand most likely longer than you will be alive? Then you are about as dumb as could be if you are doing so.

While you criticize your Sister for not having her hair more friend, dyed and laid to the side, she is laughing all the way to the bank as those countless million dollar contracts roll on in…….

…….then you’ll REALLY have something to be angry about!