Most of us see it but very few really speak on it, it has been an issue that has been with us in the church for quite a while now and many will say that it has always been a factor but all will surely agree that it is an issue that has grown to epidemic proportions in our houses of worship.

The issue I am speaking of is the ever diminishing respect in the way we honor a dress code in church, it appears to many that the dress code in our sanctuaries have been banished and even nonexistent.

The old church that we have grown up in that was the bedrock of our communities and spirituality has been seemingly replaced for the most part with an imposter facility whose main goal appears to be to embrace all worldly practices and pretty much refuses to stand up in correcting these carnal mindsets as they hit the entrance way, hence the practices that we see manifesting right in front of our very eyes with the multitudes of Jezebels in our midst running free and feeling as though this is the proper way to serve the Lord.

As far as I am concerned, there is not much difference between the modern day church and the nightclub on Saturday night and if the truth be told there can oftentimes be more decency and respect in the club than there ever could by in the church. 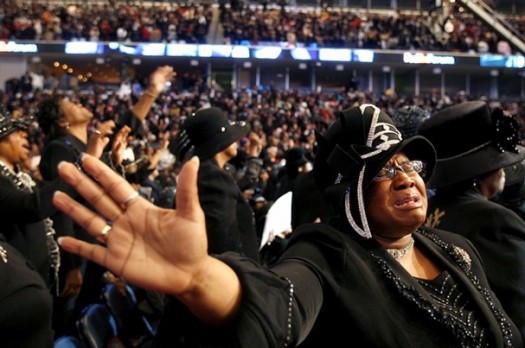 The ever exposed cleavage, the tight miniskirts, the extreme makeup and worldly adornments go unchallenged for the most part especially in the mega churches whose main goal appears to be to attain more affluent members and secure a steady stream of tithes and offerings.

what ever happened to that old church lady who used to sit in the back of the sanctuary humming under her breath who policed the whole service in strict fashion and didn’t allow anything to transpire in God’s house that wasn’t wholesome? She would call you out on it if the other members didn’t do it first! We now have an attitude in the church of live and let live while the sex game of seduction and destruction carries on as marriages are broken, homes are destroyed and lives are changed all because of the result of those who attend the church for purposes other than gaining a higher sense of spirituality and a closer walk with God to do all that is pleasing to him!

Three hours in the mirror before the service begins applying makeup, fixing hair and a wardrobe selection that would make the boldest streetwalker of a prostitute embarrassed and cringe at the thought of presenting themselves in front of people in such attention grabbing garb.

The question that we ask today is…….Are the dress codes in the modern day church out of control?

What is the results of allowing this manner of garb in our midst while we attempt to worship? Should our churches truly embrace the mindset of come as you are? How much is too much and is this really a distraction to one who is truly focused on receiving God’s word?

Tonight we will boldly face not only these and many more questions but will certainly have to face ourselves as we will get the answers to a trashy undignified standard that just doesn’t seem as though it will disappear any time soon!

Previous : The LanceScurv Show All Night Off The Chain After Party # 11
Next : Understanding Acute Negativity Infection Syndrome – How To Easily Avoid The Contagious Spirits Of Hateful People!