Anyone with two eyes can see how the things in this world have changed at such a rapid pace.

The term the good old days is not used anymore by those who are octogenarians describing their upbringing as a child but by thirty year old speaking of the 1990’s as though it was almost a century away!

I do notice these things and I have also noticed how the sexes relate to each other in 2012 and it is a totally different ballgame altogether when I compare it to the days when I was out there as a defenseless victim to the urges of my balls heeding the strong commands issued to them from an overabundance of testosterone.

Yes, the lingo will change and the music and so forth, but this is NOT what I expected the roles between the sexes to become when I see men who have become more docile and subservient in waiting for their woman to call the shots and how the expected so called job description of the male and female in our modern society has changed.

It has literally become a free for all and it goes far beyond the dating scene and in actuality is just too much to list!

It seems that everything that was expected of a man and a woman has been turned inside out. It’s almost like anything goes now.

Women for the most part have become the aggressors and men are the prey. Courting had become a thing of the past in favor of sampling ones sexual skills on the first date to determine if one wants to move further into the relationship as though a great oral sex session reveals the true character and integrity of a person. (In actuality it DOES reveal a persons true integrity and character if they jump down to swallow a load of a strangers “hot crotch sauce” on the first date, and you wonder why you are paranoid when your significant other comes home thirty minutes late because you know what they are capable of doing from your first time experiences with them! LOL!)

The gradual process of courting someone EXCLUSIVELY has all been reduced to miniscule numbers if one were to truly conduct a poll of those who still believe in it. 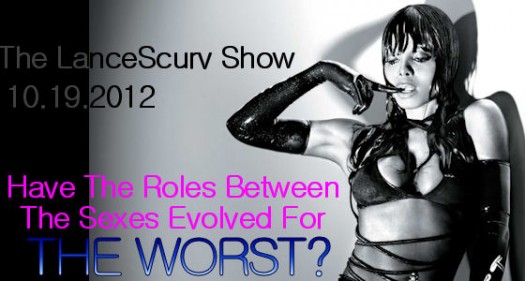 Dating is literally non existent and those do feel that they are dating are indulging are doing something far different than the innocent sampling of ones energies in a very public and safe environment as we used to growing up in simpler times.

If I might add we all seem to possess a Facebook profile page mentality where we will aggressively pursue a person who appears perfect to us at the moment but will delete them immediately and move on to the next prey at the drop of a dime as though a real live living breathing person doesn’t have feelings and is very disposable with the click of a computer mouse.

It has become so superficial where if a person appeals to us as far as their looks we are all but ready to marry and if their bank account looks right that will cement the deal!

Our roles have completely changed in today’s modern world and I for one will declare that it has been a change for the WORSE!

So during this dynamic gumbo of personal opinions, viewpoints and war stories, I want everyone to chime in and share so we can get a better understanding as to what is transpiring in this mess that has become the male/female relationship and their roles to each other.

Talk to us and make sure to not miss this riveting episode that will surely have your mind exploding!

Attention: If you cannot attend this show live, do know that it will be uploaded to YouTube and the screen to listen to it will be placed here on this very page the day after the show. Bookmark this page to revisit it at your earliest convenience!

Previous : Too Many Black People Will Brag About Their Debts Faster Than Their Ability To Stay Out Of It!
Next : The LanceScurv Show All Night Off The Chain After Party # 18