Let’s face it, the image of the Angry Black Woman can manifest frequently in our daily lives. While it would be foolish to say that all Black Women are angry as that is simply not true, you can’t deny that many are and while their presence has been tolerated at the workplace, in the community and at the home front, for those who fall under this category we want to know what IS it it that makes them so damn angry?

Again, we are not categorizing ALL Black women as being pissed off all of the time but there is definitely some who fit this type. Now I personally have to say that there are many laid back women who have their moods in check who can be roused to anger legitimately and I would not categorize those ladies as being the Angry black woman. 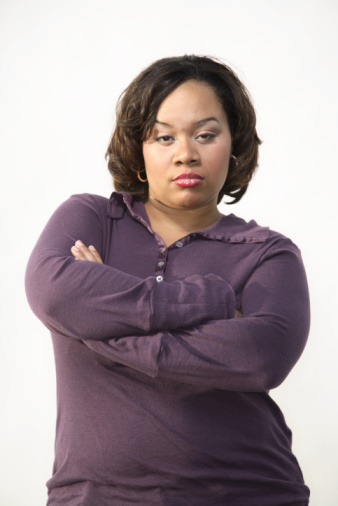 Now, to sympathize with that “upset all of the time” damsel who is stressed, it HAD to be SOMETHING that got her that way! She wasn’t born into this world pissed off! And to think, that there are so many out here just LIKE her! It must be something! What we want to do on this program is to get to the bottom of it!

Of course, people are as unique and as varied as the snowflakes that come down from the sky. So knowing that really baffles me when I see the same type of anger in these women and I always wondered how such a diverse segment of society could funnel down into the same cutting cutter mold of possessing anger on overtime.

Many fear her presence in the same manner that one would fear a pit bull that has broken away from their leash and into the public domain. No one says anything in the fear of getting into a losing battle with her.

Is it because a man did them wrong? If not then why is it that they give men such a hard time?

Are these women even worth the time to try to date? a man will tolerate only but so much before he gets in the wind to find greener pastures. Sometimes with a kinder Black woman who is not as contaminated with so much toxicity or maybe even someone out of his race who isn’t filled with so much confusion and venom.

Is it the destiny of these types to grow to be old, bitter, negative and unfulfilled with a house full of cats? What kind of future would ANY woman have to get a good man if she is constantly on the defensive spewing venom and displaying those unbearable attitudes?

For all of the churchgoing women in the Black community, why is it that so many are angry when not in service falling out in the spirit and acting as though everything is alright? Has the church failed them?

Is there really any hope for the Angry Black Woman or will she continue to isolate herself in life and miss the boat no matter how much material success she may acquire?

Can she broaden her scope on the vastness of life to see beyond her pain?

Or will she continue to fall deeper into the bottomless abyss of frustration, anger, bitterness and rage?

While we know that life for anyone and everyone can be hard, we do acknowledge that the Black woman may have a unique set of challenges not only in America but the entire world. Now this is not an excuse for such outlandish loud behavior, but one must know that we ALL have the tools to overcome any obstacles to succeed.

But how long can one endure the rolling eyes, hands on hips, twisted necks and confrontational words?

It’s a hard subject for some, but we MUST speak on it for sure!

I want to hear from EVERYONE! Black, White, Male, Female and all in between.

This discussion is for mature intelligent participants only and not meant to bash or insult anyone who may have a different opinion.

Also, the entire program will be uploaded to my YouTube channel (YouTube.com/LanceScurv) the very next day for your listening convenience just in case you’ve missed it