Some people just won’t honor a Black man in the personage of the Honorable Nelson Mandela because of the pristine and divine content of his character no matter what! This holds true especially when your very life is a textbook testimony against the stereotypes that of Blacks that many are comfortable with that makes it conveniently easy to see us as something that’s less than the human race.

When are some of these bigoted so called Americans going to understand that in this life it’s more about our humanity than any nationalistic boundaries that isolate us from so much good that exists in the world?

When is America going to realize that the world has moved on beyond it’s narrow mentality and are on the verge of doing bigger and better things above the constraints of a racist society?

Oh how foolish you look Amerikkka!

…….and from the looks of things, some Americans will continue to do a great job of making themselves look like an ass for a long time to come. 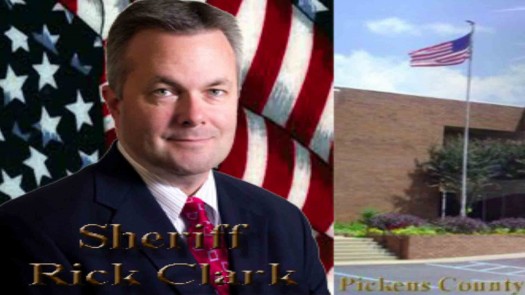 But this is why I’m in a tizzy of a mood these days, I found out recently that a Pickens County South Carolina’s Sheriff Department refused to fly their flag at half-staff as per order of President Barack Obama in honoring the passing of iconic leader Nelson Mandela. This buffoonish act was executed at the order of Sheriff Rick Clark because he felt that the lowering of flags at half-staff should be reserved for Americans only and not for anyone who is not a citizen of this country.

“The flag at half-staff is for Americans’ ultimate sacrifice for our country,” Sheriff Clark said. “We should never stray away from that.”

At the time of his refusal to honor the flag order, it was already flying at half-staff for an officer who lost his life in the line of duty and for Pearl Harbor Day but will fly high to ignore the order to honor Nelson Mandela.

Now come on already! Can’t you see through the bull-crap?

The Sheriff HAD to come up with a contrived reason for not honoring Nelson Mandela and it was a paper thin attempt at best, but who could really say that it was those reasons alone and not because he was Black?

Especially since it was a Black President ordering the country to honor another Black man!

I can hear ol’ Rick Clark at the Klan meeting right now telling his comrades how he “stuck it to the President” and how he ain’t gonna back down from anyone that looks like him no matter what their position as they give each other high fives between “YEEEEE-HAAAWWWWS!!”

No maybe I’m wrong in my assessment into his after work activities and his personal affiliations, but what would shock me is if my aforementioned scenario WASN’T true! Why? Well come ON already, Pickens County South Carolina? That’s a damn Klan stronghold for sure! But then again so is Central Florida, especially for some of those in Law Enforcement here, but that’s another story. LOL!

My thing is Mr. Clark, that if you were really a tough guy like you try to portray, why don’t you merely come out and tell the world the REAL reason why you weren’t going to honor Mr. Mandela?

Show us that you’ve got some balls!

But then again maybe even HE believes the lies that he hopes the world will accept. They have a way of doing that and I’ve seen it all of my life. It’s a mental sickness for sure and this is why I’ve said that Racism IS a sickness.

But many will attempt to throw it off on me saying that I am prejudice because I am fearless in the describing of what I see, but what I see is 100% pure unadulterated racism in that punk move.

Because if the truth be told, if you are a good servant of the people as all law enforcement is supposed to be, you will follow the orders of your superiors regardless if you agree with the order or not. But color seems to change all of this because if President Barack Obama ordered the American Flag to fly at half-staff if a Jewish Leader or high ranking Priest in the Catholic Church died, Sheriff Rick Clark wouldn’t hesitate to do so!

Many in White America despise the fact that the world has honored a very honorable Black man without their approval, the very life of Nelson Mandela just doesn’t fit in with what they want to think of us so many refuse to honor him in any way whatsoever. The same thing happens right here on these shores where they can show their backside to you more so with confidence politically and in their places of employment because they are the majority population and can bend the rules to fit their mental sickness in any way to put them in the right each and every time.

So this is why I referred to the American flag as a “noose” in the title of this article, because it has represented to many just that in how we as Black people here in this country are used whenever we are needed to fight on the front-lines of their wars yet treated like a mere tool when there is no use for us. We are told to pledge allegiance to a damn flag but the laws behind that flag are manipulated against us!

We are considered Americans when they need us to fight for their corporate interests in invading foreign lands but can’t get the same damn rights over here after we lose life and limb to gain those same rights for someone else in THEIR land! The American way of doing things truly has been a noose around the neck of the Black man because in this country it’s damned if you do and damned if you don’t.

Of course those who are the closeted racists here don’t want our Black souls to be recharged and collective minds refocused on what the truth is of White supremacy because of the legacy of Nelson Mandela because HE was fighting the same battles over there that we STILL fight over here everyday!

Sheriff Rick Clark will not be penalized for his refusal to follow along with the federal flag code because as stated recently in a Congressional Memo it: “does not prescribe any penalties for non-compliance nor does it include enforcement provisions” and “functions simply as a guide to be voluntarily followed by civilians and civilian groups,”

So he was not breaking the law by following his mind to not comply but he did a hell of a great job revealing the content of HIS character!

But then again, aren’t we used to the many countless so called Americans like him doing that very same thing?

They’re in our neighborhoods, on our jobs, at our houses of worship and just like that man who feels the ravages of the flu taking over his senses in a very swift way, his coughing and sneezes reveals just how sick he really is and why he has to get treatment immediately before it gets worse.

Well, a cold or the flu is not as bad as a racist heart and mind, and at this point – like HIV – there isn’t a cure in sight so the only thing that can be done to a racist to avoid their deadly venom is to avoid them at all costs!

Quarantine their presence in your world as though your life depends on it because when you really examine it, it just MIGHT!

…….these are your bosses, your judges, your doctors and your law enforcement officers!

And I can tell you from my 50 years of living on this earth, they are alive and well and growing in numbers as we speak!

So never expect them to fly any flag at half-staff or you when God calls you home, only look to those who do not have this sick mind to honor you as the good people STILL outnumber the bad!

…….didn’t the service of the late great Nelson Mandela prove this?And who will be remember down through the ages several hundred years from now and beyond? Sheriff Rick Clark or Nelson Mandela?

The answer to that proves my point and tells you how important the frivolous insignificant actions of the Pickens County Sheriff’s Department REALLY are!