Two brothers who recently immigrated from Senegal were beaten by fifteen boys at their school while being called Ebola.

Pape Drame, 13 and his brother Amadou Drame, 11 had to be taken to a local hospital in the Bronx, New York after their Father, Ousmane Drame, picked them up from the school after this tragic incident took place.

Thank God that a school safety officer was nearby to notice the attack before stepping in to stop it from going any further.

The way I feel about this incident personally is that their is too much ignorance in the Black community as well as a massive amount of self hate still lingering in the minds and hearts of not only our children, but the adults to whom they go home to that speak in such ignorant ways behind closed doors. 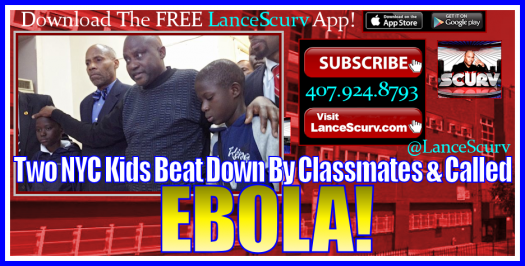 While I am not accusing every Black American child and adult for perpetuating such ignorance, there are far too many people walking amongst us who keep this type of mentality alive and it has no other choice but to trickle down to our impressionable children.

We of all people should know better after having to endure the worst sustained treatment of all in recorded history!

We should be more compassionate to others who may immigrate here from another land and utilize the opportunity therein to learn and expand our minds.

But far too many of us who are so “Americanized” have become disconnected from seeing someone from the Motherland as our Sisters and Brothers.

Again, our ignorance will cause even more separation in the Black diaspora worldwide and allow an exploiter and oppressor to capitalize on that disconnected for their profit and for our continued destruction.

We need to do better amongst ourselves as a people and that time is now!

Please leave your thoughts, opinions and words in the comment box below and do know that I truly appreciate your participation. God bless…….

Previous : A Philadelphia Woman’s Angry Words For The HIV Rapist!
Next : Would Visas Be Blocked If Ebola Originated Out Of Europe? – The LanceScurv Show