I just finish reading an article that featured the words of Attorney General Eric Holder stating at a commencement speech at Baltimore’s Morgan State University that “racist rants are much less of a threat to equality than the more subtle, everyday racism of the criminal justice system.”

It’s somewhat comparable to being given the choice between having a bathtub full of water being dumped on you for a brief moment as opposed to having that same amount of H2O slowly dropping on your head one drop at a time as in Chinese water torture.

Getting that type of treatment all in one shot is surprisingly more digestible as opposed to finding out in small increments that some of those around you in your world and along your path have these toxic thoughts and feelings about you that you have to deal with.

For the most part in my life it is more of an annoyance than a major obstacle because I’ve developed an incredibly strong will to surmount any negative mountains placed in my way one way or another.

What I really watch for in the racism department is for that person who has a modicum of power to make my ascension to my goals more difficult because of their toxic intervention and twisted intentions to stopping me from getting there simply because I’m Black.

That in itself makes me sick not only to realize, but to even repeat it to someone.

The worst part about sharing your experiences of that subtle racism in this world is that those in denial about it seem to want to act as though something is wrong with you for pointing it out.

I understand that racism was here when I arrived to this world and it will surely be here when I’m gone, but I’m damn sure not going to overheat when it rears its ugly face in my life because it doesn’t deserve that much of my energy at this point of my earthly journey.

Don’t lose control when racism touches you, just expose it for what it is and disconnect your mental, physical & spiritual resources from it so that you can continue on into your destiny on this plane as God intended.

What do I mean by expose it?

Well in the age of social media it’s a snap to instantly expose those for the venom that they spew forth from their mouths that is contained in their ignorant tainted hearts.

Record and upload is what I say!

Just protect yourself and do it anonymously and have a big laugh at their expense as you observe them attempting to explain themselves to the masses as though what they said was a fluke.

Many will say that it is illegal to record someone without their consent. But would it be logical for a cowardly racist to want to repeat themselves in person after being told that a recorder is capturing their every venom laced utterance?

In the sport of boxing it is illegal to throw a low blow, but sometimes it’s worth the referee deducting a point because you threw one because the draining effect on your opponent is well worth the loss of a point as you move into the later rounds of the fight.

Other than that, simply never again invest the time or energy even speaking to this type of demonic entity and move about as though they really don’t exist.

Too many of us are dropping down dead prematurely from the unnecessary ailments brought on by the stresses incurred by our direct contact with these so called subtle bouts with racism.

Personally, I am more of a quiet assassin than a vocal victim.

I am not going to allow anyone to cause me to be stressed because of their racist mind without them feeling several more times the stress that they attempted to put on me.

Turning the other cheek is simply not in my D.N.A.

But wait! Am I contradicting myself in what I said earlier about never giving a racist situation any of your precious energy than necessary?

No, there is no contradiction, the universe has given you the right to release any negative energy placed on you right back to the sender tenfold and more.

Now after you have dealt with it that’s when you leave it alone but if you don’t release the tensions brought onto you by your inbred assailant, then the injustices incurred will live on with you and make you sick if you embrace it for the remainder of your precious time on this earth.

After a time it will cause you to fail your mission here on this earth and cause you to appear to be the madman who is so overwhelmed by past transgressions that it has handicapped your true righteous nature and actually make you no better a person than they are.

At that point it will be easy to dismiss you in their media platforms as someone who is a hateful bigot/racist as you have given them the opportunity to deflect the spotlight from them and onto you in with the tactics of propaganda that they love to execute on the fearless truth tellers.

So this is how you must pick your battles carefully with the trained eye of a demolition expert.

He can bring down a skyscraper with an amazing precision by placing powerful explosives at the exact points to reduce the structure to merry rubble without damaging the other buildings around it.

This is how you must be precise in how you deal with these subtle attacks on your very character based only on the preconceived stereotypes of the color of your skin.

The sad part is if you really get into reading their history books as well as the hidden writings – that are purposely kept out of the public eye except for those in the various inner circles of secrecy – you will find that if anyone deserves a stereotype because of their repeated offenses against humanity, it would definitely be those of the bloodline of the racist mind.

…….and just like that repeat criminal who continues to break the law as though he is above it, the judge will show him less mercy with every subsequent visit to his courtroom.

Spiritually we have the right to act in this same manner with those who willingly embrace the racist mind.

For those who choose not to face these subtle (and major) attacks in favor of it simply vanishing into thin air, understand that while all negative situations just might pass on if you wait around enough, the unseen spirits that are behind it are transferable and will live on down through the generations to perpetuate more mayhem long after you have passed on from the face of this earth.

So it must be dealt with on the invisible battle grounds of the spirit because these are demonic entities behind it.

…….and until one can truly see racism and the one possessed by this spirit as a demon infested person, you will be wasting your time attempting to match word for word with them because their vision is blurred completely by the evil monster that resides within them.

I feel the blows of the racist agenda in subtle ways as well as the major confrontations daily.

It doesn’t just boil down to someone calling you a nigger or threatening your well being, a simple scornful look or putting you through the grill of having to validate yourself to people who will never accept you is draining in itself.

Again, deal with it with all of your might and then move on. Dealing with racism is like watching a Floyd Mayweather fight where he is matched with an opponent with murderous punching power who could possibly end the fight with one blow.

Watching Floyd you will begin to understand that it’s about hitting and not being hit. Inflict your will on your opponent while never allowing him to even lay a glove on you.

This is how you deal with the slow burn of attacks of racism on your righteous soul.

Know your value and worth.

…….and most of all, know that you are superior as a spiritual being blessed with the natural powers that come with your despised melanin on this physical plane to elevate you over any situation that they attempt to bring you down in.

Whether it be on the job, a difficult neighbor or that racist cop that couldn’t resist pulling you over simply because you drive a car that his child support and alimony checks won’t allow him to afford.

People like that are simply pissed off coming out of the box!

While their propaganda media machines will tell you over and over again that color doesn’t matter then turn around and hate you because of it, understand that they hate your skin because of the power behind it and they don’t want you to know how powerful you really are.

Every fruit and vegetable under the sun has a coloring that indicates what powerful nutrients are contained within and we as humans have various gifts in the spirit indicated by the packaging that we are contained in.

If we fail to activate our spiritual potential by remaining in the indulgences of the lower levels of the flesh, then we have forfeited our right to possess the God given power that will protect us against all things detrimental to our well being.

Therefore, the best way to dealing with a racist individual and society is to be on point to live in at manner that God desires so that your protection goes higher into a realm that they can never disconnect in order to bring you down. 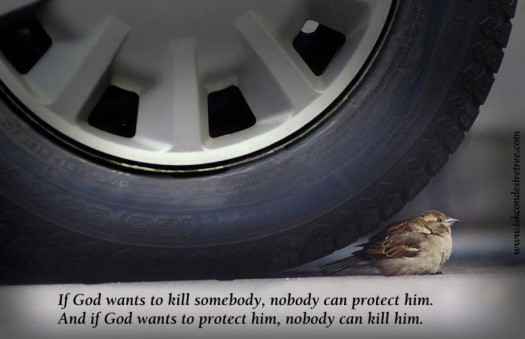 The same stands for your bouts with racism and the effects of the subtle bouts with it can slip through the cracks of detection easier than a pronounced episode.

This makes it more of a killer than any other variety so keep yourself walking in the spirit of a true God connected warrior in order to absorb the goodness of this life as opposed to the toxicity prepared for you by your dedicated enemy.

Your Brother Who Has Walked Through It & Survived To Tell It,

Previous : Are The Expectations For Our Children Far Too Low? – The LanceScurv Show
Next : Bold, Raw & Uncut: Late Nights With LanceScurv # 75