After hearing of the classless Instagram social media rant attack that Fantasia Barrino levied on the one and only Jet magazine for not using her submitted current photos for her cover shot but chose to use a picture that’s approximately ten years old for its March 18, 2013 issue, I wondered if the current crop of today’s so called stars are delusional spoiled brats who are out of touch with reality.

Here are Fantasia’s exact words: “This saddens Me!!! It is clear that this picture is 10 Years Old and JET Magazine puts it on the Cover!! After I send them the NEW LOOK AND DIRECTION. . SAD!!! I WANT A PUBLIC APOLOGY FROM JET. Now I’m not sure if the interview is correct. SEE!! America they and use me as they crash Dummy BUT NO MORE. IF I DONT STAND FOR SOMETHING ILL FALL FOR ANYTHING,”

…….now was this REALLY necessary?

While the business of “image” most definitely plays a part in how the fans perceive their favorite stars, they should understand that the engineered images that make the entertainers appear to the world as picture perfect humans beings must be tempered with a genuine connection to their fans away from the manufactured environments that our stars of yesteryear never had the pleasure of working under.

I can remember a time when Fantasia Barrino projected an image of the ’round the way girl who was simply overjoyed to make it to the worldwide level of super stardom but do not know WHAT happened to turn her into the entitled BRAT of a Grand Diva that someone lied and told her that she was!

What happened to her attitude?

Doesn’t she realize that all good respectable publicity is great publicity no matter WHAT photo is used of her but to publicly BITCH about what photo is used will definitely not earn her anytime soon another consideration to be on the cover of such a reputable and respected magazine like Jet ever again!

Jet Magazine was here in the world long before she was even a stirring in her Daddy’s crotch-sauce sack and will be there years after the last few shovel scoops of dirt are thrown on top of her casket so who in the heck does she think she is?

We sometimes let this thing called fame and notoriety get to our heads as it is too easy to believe that we are much bigger than what we really are.

But I really can’t blame her because I’ve met a few delusional working stiffs in my day who will tell you that they have worldwide tours in dozens of countries and lots of employees in their still hard to find companies that they employ but still get up everyday to work on someone else’s job.

So if a free Facebook and Twitter account can have a person gassed up that suffers from a lack of hugs and male attention growing up then how about someone who is really famous with a certain level of talent and longevity in the shark infested music business?

It’s easy to think highly of yourself in a world that has an entity like Kim Kardasian starring in a very successful Reality TV Show that still cannot show anyone an ounce of talent or what unique abilities makes her a noteworthy subject other than being a public sperm receptacle to a few well chosen famous goons who got caught up in the spectacle of her two well promoted ass cheeks that lured them in like fish to a worm on a sharp hook!

Kanye WHAT were you thinking?

But back to Fantasia I have to say that she should be glad that she has lasted this long in the public’s eye and that legacies are built with hard work and a willingness to look past those occasional blunders that will happen because in the end the whole entire world is watching and it is so easy to turn off your fans overnight who support you even if your rant wasn’t aimed at them.

Be gracious that after so many years that even a Jet Magazine would still even be interested in you and move on to make the best of it.

While your submitted photos came out nicely what will be more remembered about them was the accompanying rant that was spurred when those visuals were not used.

The bottom line is that if Jet Magazine wanted to use any image of you from any performance or time period in your life they are free to do so because it is THEIR publication to do what they deem is best for them! You just have to learn how to roll with it and keep the ball rolling in your career with an awesome body of work.

Understand Fantasia that great work produced consistently over a lifetime will dilute and minimize the effect of your naysayers -real or imagined – on your career so the energy spent trying to get up on any Social Media Network to bash a corporate entity that doesn’t need you as much as you need them is really counter productive to your long term goals.

Our stars of yesteryear knew this as they traveled from city to city to ply their craft to the small venues and loyal fans in places that most couldn’t pronounce, but after many years of doing so built a following that couldn’t care less WHAT photo that Jet Magazine chose to put up of them.

They had a strong connection with their star and absolutely nothing could change that so adjust your attitude issues and let us see that young lady who was sincere happy to receive the blessings that she did and shower us with the love that you have for your brand of music and stay true to yourself. 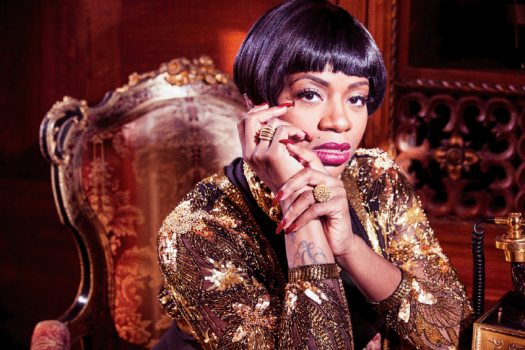 It appears fame has begun to cause your refreshing innocence to rot just a little and if left unchecked it will cause you to become something that the public just won’t stomach…….and that will be a sad day indeed because you are still so very young with so much to offer the world as you grow as a person, a singer and entertainer.

The public never ridiculed you when you admitted to certain areas of your academic life that you still wanted to improve nor did they trash you when your personal choices in a man may not have been what they thought were the best for you. Through it all your fans have showed you love because of he good they see in you genuinely but not for that person who seems to now have her ass on her shoulders.

…….because whether you know it or not Fantasia, the music industry can chew you up and spit you out and not miss a beat as there are a gazillion young and very eager candidates who are so very anxious to take your spot so let’s tighten it up a bit.

E! True Hollywood Story has a lot of empty slots to fill in the future of once adored stars who fell from grace and there is NO guarantee that you won’t end up their one day so don’t do it to yourself my dear because that young innocent lovable girl that the masses believe still dwells inside of you doesn’t deserve a public fall such as that…….

Previous : Always Challenge The Rainbow To Keep Its Promise To You For A Better Life!
Next : The Unseen Shackles Of Time