I have a confession to make this morning that I am somewhat ashamed of to share and never thought I would find myself making. Upon arising after answered the call to nature and freshening up with a long shower, I sat down to enjoy a nutritious breakfast and was taken in by the beauty that existed just a few feet from where I sat in my backyard as I gazed through the window.

I fired up my laptop as I savored each delicious bite of the vegetables that were grown in that same backyard and while I cleaned my plate I noticed the remote control just staring at me pleading for my attention.

Not one to really get into the mindless hours of absorbing the madness that is the norm and ritual of so many who claim that they never have enough time in a day to get the important things done, I gave into the weird temptation to channel surf and I can remember saying to myself that it would only be for a few moments yet ten minutes later I was still there soaking in the seductive and very intoxicating public display of shameless dysfunction that is the Steve Wilkos Show!

No how in the world would I find myself there when there were literally hundreds of channels to choose from?

That is a question for the ages but the fact of the matter was that I could now understand why so many people get caught up in this mental trap called television because the material that I was viewing would give one that same strange fascination that you get when you are driving past a car accident and you want to see how much damage that was incurred before driving off in a carefree manner as you say to yourself that you are so glad that you are not in that predicament.

And yes, I said just that as the show featured a man who cheated on his girlfriend only to find out that the woman that he cheated on his girlfriend with was a man! Now depending on your lifestyle preferences this might not be too much of an issue but the dapper Don who was deceived was visibly upset because as far as he professed he was of the heterosexual orientation and hadn’t a clue that the partner in his secret liaison was carrying the same set of genitalia between “her” legs as he was.

…….and to have this played out on national television as well as being broadcast to the world once the internet gets its hands on it? Not a great feeling at all!

Look, my suggestion to you is if you ever get invited to the Jerry Springer or Steve Wilkos Shows please DON’T GO! There is nothing but shame, embarrassment and drama coming out of it and your life will probably NEVER be the same! You are merely trading your life situation in for their ratings and the amenities provided to you in the form of airfare and hotel accommodations are mere pennies on the dollar when compared to what the advertisers are paying them to showcase their products and service on. But knowing this it STILL won’t be hard to find a fool who wants a freebie!

But as I observed this travesty play out on the television set in my living room, I began to look a little deeper into it and thought of how we as a culture are truly in trouble if this is what we consider entertainment in this day and age. Not only that, but when you think about how long the Jerry Springer Show has been on as well as the spinoffs of the same style, these programs in actuality have been on for DECADES!

Are we as a people guilty for even WATCHING this poison or are the producers of this excrement the culprits who are damaging the minds of our people and worse off our children?

Well, while we all know that those in the media are SUPPOSED to have some type of moral backbone in what they share as programming to the world, we now know that corporate greed is what drives their motivations and since they understand that WE literally LOVE to see ourselves at our worst, they will continue to dish out in heavy dosages what we crave and the sky is the limit!

So yes, I blame US as a people for how bad the miracle of television has gotten and how lowdown the standards have sunk down to. If there were no demand, the suppliers would acquiesce and give us what we demand!

But it is already too far gone to pull back now, imagine the effects on the younger generation or rather LOOK at the effects on the generation that was raised on this filth and I can safely say that you don’t have to turn on the television to actually SEE the equivalent of the Steve Wilkos/Jerry Springer Shows anymore because all across America in every City you will find situations that you would NEVER see on these broadcasted displays of public human degradation! 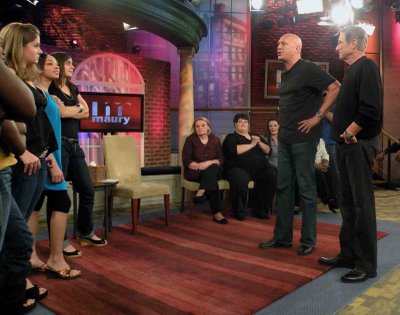 America if this is what you have become then you are in trouble! If all you can desire is to see the next wife caught with the next door neighbor who happens to be a transvestite midget then YOU have lost your mind!

Yes! This is what we call entertainment but the sad part about it is that we are in a situation where life has imitated art! Look at ourselves in public and how we carry on as Americans! But to make matters even worse let me be the first to say that when it is time to indulge in the filthy things of the world, African Americans seem to REFUSE to be beat! whatever is happening out there in the world on the level of Godly transgressions, WE seem to want to outdo all others in doing it even MORE NASTY than the original culprit. So if we see a whore, we want to be a FREAKIER WHORE!

If we see a criminal on television, then we want to be an even MORE RUTHLESS THUG than what we’ve soaked in on that electronic box of high potency mind control!

We are allowing our minds to be highjacked by this filthy manufactured culture by those who control it and we do not have anymore the sense to filter out what is good and what is bad for us. We just openly accept what is out there as truth, law and gospel and let it all flow in!

We have become pigs and heathens and are reaping the negative benefits or rather consequences of this manner of living right now as we speak!

The animals in the wild have more sense than us because they are acting as made them to act and are never out of character as we are as the human beings who were supposed to be God’s highest creations with the ability to think. So therefore we ARE animals because we are no better than them who do not have the innate sense of reasoning as we have thrown that gift away!

Watching these programs is like taking a bath in dirty water and expecting to walk out of the bathroom cleaner than when you entered it. It does absolutely nothing for us to ingest this mess when we as a society have so much work to do and so much damage to correct from the neglect that we have incurred.

But does it really surprise you when our youth are acting out what they saw on the television set growing up when you were too busy to take the time with them to teach them right from wrong? You thought that they would be okay but what you didn’t know was that you sat them down in front of the filthiest mechanism for information transferal at the time in their lives where there minds were the most absorbent!

So does it surprise you when you eat corn all day long then SEE corn in the toilet bowl when you turn around after answering the call to nature?

The only way to restore the dignity and good standing that we had so much better than we do today is to align ourselves with and submit to the divine laws that were placed here by the One God who made us all.

How can we operate a new gadget without the instructions and what would happen when we try to do so?

Well, we don’t have to look too far as to what would happen if one would try to operate something that was made in a complex manner without its instructions because all we would have to do is to grab that remote and channel surf or merely look out the window at our own communities.

If that is not ALONE a cry for help and a smack in the face that we all need help as the time is crucial then we all need to get our heads examined!

…….because to me, it is like waking up at home in the middle of the night to find your room engulfed in flames, yet rolling over in your bed as the house burns down telling yourself you will get up after getting another extra hour of sleep!

The time is crucial as we don’t even HAVE that much time! Wake up people! Your house is burning down quick and you only have so much time to get out! Put that remote control down and save your life!