What does the term “Strong Black Woman” really mean?

I mean, I hear this repetitive war cry shouted out several times a day whether it be on television, in print or in an interesting exchange at the supermarket check out line like I just experienced not too long ago earlier today.

There I was standing on line ready to check out my items when I noticed that a well dressed young lady of about 22 years old had only two small items in her hand. I had so much more as I had a full shopping cart but I thought to myself why didn’t the woman in front of her allow her to get by with so little? I would have done it for her if I was in front of her in the checkout line.

But let me slow down a bit and give a bit more information on what was going on in those few very revealing moments at the checkout line.

Number one, the young woman getting her items rung up was an extremely overweight female also about 22 years old. The woman of the same approximate age who had the two small items was standing between myself and the heavyset woman.

Okay, the somewhat obese woman had four young children all under the age of six with the youngest looking to be less than a year old. They were all vying for their mother’s attention and she was highly annoyed because of it. Seems as though she exhausted the funds on her E.B.T. Card and had to add some additional cash on top of it to get the items that she wanted to purchase.

She was very frustrated, she labored to breathe and it was obvious that she wasn’t in the best of health. The items in her shopping cart made it obvious that healthy eating for her OR her kids were not a priority like the freshly done multicolored hair weave was.

She dug for more cash that she didn’t keep in one place and her anguish grew as the young lady who stood behind her and in front of me waited patiently and with an pleasant look on her face and an overall patient demeanor about her presence.

As for the young woman in front of me, she appeared to be in very good shape as the two pieces of fruit she clutched supported my theory that she was a health nut.

She also had an Android phone in her hand that she just got off of. I overheard her softly saying just a few moments before that she had an important class that evening at the University Of Central Florida that she just couldn’t miss. But she assured her friend that she had enough time to get there even though the checkout line she was in was moving along slowly.

At this point the woman in front with the kids was pissed off beyond measure even more so because she was aware of how she held the line up and was a bit embarrassed and self conscious of how she appeared in contrast to the student behind her who was very patient and in no way annoyed that she wasn’t allowed to step in front of her out of common courtesy.

Literally out of nowhere the outburst happened!

Like an exploding pressure cooker, the weave wearing woman with the four children gave the world around her a piece of her mind!

She screamed out that she doesn’t care about WHO doesn’t like how she’s moving slow and that every “bitch” behind her in the line just better wait their turn like she had to wait for hers!

Was she speaking about the young lady in front of me or was she referring to all of us who stood in the line?

It was confirmed that she spoke of the student because she now screamed “I don’t care how many classes you have tonight, I’m taking care of MY business and you are just going to have to wait! These people ’round here think their better than everybody else but let me tell you I’m a STRONG BLACK WOMAN!”

I couldn’t believe how she went from zero to sixty in just 1.3 seconds! How did she equate her slow ass holding up the line because she was short on cash after running up her E.B.T. Card to the limit with anybody feeling as though they were better than her and then jumping to her fraudulent self evaluation that she is a strong Black woman?

I began to think that her weave was possibly sewn in too tight or she may have been under the influence of the glue that hairdressers use in their weaves! LOL!

But this very intense contrast and display of the best and worst in human nature was quite a crash course and I intended to decipher every hidden nugget of truth held therein.

Thoughts hit my brain in rapid fire succession and I first asked myself as the line finally began to move forward was why is it that many women who claim to be “strong Black Woman” are also (Not always) very bitter and obviously man-less?

Again, let me say that I love my sisters but SOME of them have some major issues and I’ve learned that when a Black women has to proclaim to the world that she is a strong Black woman then something is missing in her life elsewhere. This is merely a theory at this point but it’s definitely a pattern that I’ve began to see frequently as I go about my life.

I was jolted back into reality once again because of the repeated calls from the checkout girl for the evil ‘hood chick to return because she had $3.17 more to cough up to cover her groceries.

The woman continued to walk out mad at the world and yelled back to the check out girl to go and call the cops to get it from her because she spent enough money in that store over the years and she shouldn’t stress her like that! Amazing attitude of entitlement as a side dish of a jacked up mentality to say the least!

Well wouldn’t you know, the patient young lady who stood in front of me simply told the cashier to forget about being upset with the loud woman as she pulled out a five dollar bill of her own to cover a potentially short cash register! This was after that loud woman called the student a BITCH!

I learned a very valuable lesson that day and was glad I was there to observe and absorb it.

A true strong Black woman doesn’t get pissed off at the world because of the bad choices that she made when she was in an immature or naive state of mind, no, she quietly owns up to it after learning her lesson to never put herself in that position again.

A strong Black woman will always find a way to make a personal situation right without making a scene and calling down any negative attention down upon herself.

A strong Black woman will always be a true lady in every difficult situation and draw those who may be weaker to her as she has earned the title of being the one who possesses not only the strength but the WISDOM to overcome anything that this life has thrown at her!

So when you run across these WEAK Black women who do not understand what a true strong Black woman truly is and claim to be, understand where they are coming from and let them live their delusion of a false self image.

……because you and I know that they speak from a mindset of cowardice and weakness.

Now, about my “man-less” comment that I made earlier when referring to these fake strong Black women, many of them will claim that most men cannot deal with them because of their strength. In actuality these men hit the road with the “quickness” because they’re so unbearable to be around.

It’s not your “strength” that ran them away, it was you lack of it that did it because you were too weak to restrain yourself from running your mouth uncontrollably! No GOOD man wants to come home to drama, tensions and stress, and a great way to push him out of the house without a fight is to bring him more stress than he faces when he is on the battlefield of the outside world.

He gets beat up on enough out there and what he needs is a REAL Strong Black Woman who is wise enough to know how to communicate her concerns to him without the attitudes!

The good Brothers out here are NEVER intimidated by the strength of a REAL Strong Black Woman and we just can’t get enough of her! She is the prize that countless men want on their arm and the Queen that all fantasize about having on their throne.

So don’t get it twisted. There are MANY strong Black women in our midst, the one main rule of the thumb is that if you can hear her profanity laced confrontational mouth long before you see her, chances are she AIN’T the real thing!

The true Sisters who are the real Strong Black Women show their strength consistently over time without hesitation to create a legacy that will leave a mark beyond the present time as their true strength never diminishes even when time takes its toil on their physical being.

The false ones are forgotten as soon as they shut their bitter mouths and remove their repulsive presence from ones midst as they have nothing to offer except negative energy, toxicity and sure road to a life of misery. Believe that. 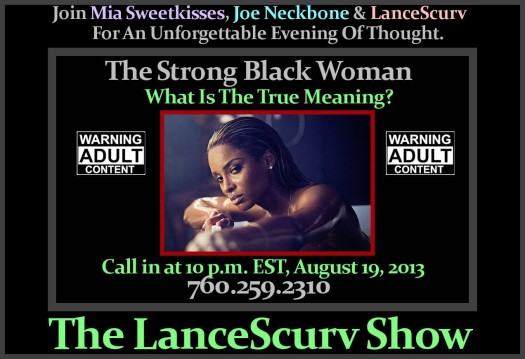