While we all will have our thoughts, feelings and opinions on the George Zimmerman case, what really troubles me to some degree is that so many people are seeing reality in such a different way.

I mean, no matter how much they try and slander Trayvon Martin to make it seem as though he was justified in killing him, the fact of the matter is that George Zimmerman was told to not pursue Trayvon anymore. If he had just listened and did just that he wouldn’t have found himself in all of this hot water for killing someone who was merely minding his business.

But this arrogance is a reflection of what I’ve had to deal with in this country as a man growing up packaged in the skin that I’m in. It’s a perspective that most refuse to listen to who don’t look like me and one that is swept under the rug for those who do.

The widening gap of how many Americans see the reality of life in this country is getting bigger by the day. Cases like the George Zimmerman trial only help to broaden the chasm and does nothing for the healing that this country must go through in order to ascend to an improved society.

But at this point in my life after seeing the various low down comments on these message boards from people who are definitely mentally sick but parade about the earth under the cloak of “normalcy”, it only helps to strengthen my personal resolve to leave these shores to live out my years elsewhere.

…….and so many are shocked when they here me say this and while it may not be everyone, I feel it’s because they have some type of mentally sick allegiance in a place to which they’ll be seen as nothing more than an inferior form of life that needs to be demolished. 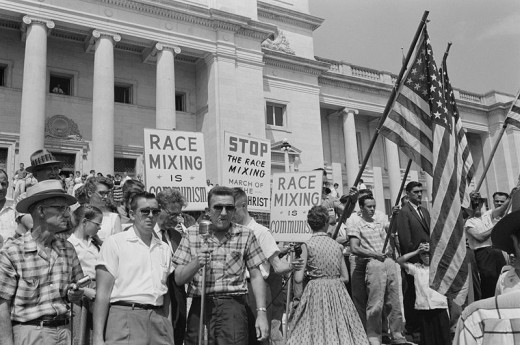 Can you blame me for feeling this way? What person in their right mind would want to stay in a place where they’re not wanted? Surely not I!

I believe we as human beings have the God given right to move about this earth anywhere one pleases and if one part is not doing it for you then you can up and go to whichever part does.

But it’s amusing to me when those who are considered for now to be the mainstream population become inquisitive when I state my intentions of divorcing America to embrace another part of the earth as my home.

But would anyone become baffled when hearing that a woman has divorced her abusive husband after he has beaten her countless times, accused her of things that she was not guilty of and neglected her needs while tending to the needs of other strange women who haven’t any connection to him? That would be almost something to be applauded and admirable right?

Well look at it this way, America has been in a relationship with Black people for hundreds of very intense years. We have been the faithful mate to America defending her and nursing her from infancy to become one of the earth “greatest” countries on the face of the earth yet we get no credit for our huge role in its successes.

Could you imagine that supportive spouse who helped their husband/wife through school working several jobs to make ends meet so that they can focus on their schoolwork only to be ignored and even scorned when the great job is landed and abandoned once they got on their feet?

Is that a great feeling?

Well, the last time I checked, no one in their right mind would live in darkness while paying everyone else’s light bill with the small amount of money that they have while remaining in debt to others who look down on them!

That would be straight STUPID!

But yet and still, this is what America does for all of these other countries while damn near refusing to build the crumbling infrastructures and investing in the human resources here that we have in abundance.

They ship people over to fill the few jobs here that are left or they merely outsource them for little or next to nothing while we make due with the crumbs that are leftover.

So in this abusive marriage that we have with America I say how many of YOU would stay in a marriage with a mate who exhibits the same traits that the United States Of America has on not only Black people, but all others who live here in the human family who do not have the money, power and influence to make this abusive system work for them.

…….if you don’t have those kind of means to move in the affluent circles (Not that I would suggest it to anyone!) of those bloodsuckers in the secret societies here then I say that its time to GO!

Change is something that I will always fight hard for but the victory in the war doesn’t require that I stay in one spot that as time goes by becomes a disadvantage to me.

It’s a big world out here and it would be a shame if one didn’t expand there horizons to go to a better place where you are not demonized, hunted down and targeted for termination.

All because you’ve merely questioned and revealed the dirty evil demonic tactics of these political/corporate/religious thieves who have the masses fooled yet deem you to be a crazed troublemaker merely because you see them for what and who they are.

So yes! I am soon setting in motion my divorce from you America, but know that in my heart I have not been attached to you for a very long time. Your way is not my way and I cannot condone your treatment of my children in your courts and by your law enforcement agencies. Your attempts to squeeze the blood out of me to usurp my God given life force for YOUR selfish benefit will cease and exist no more.

I am NOT bound with the fear that you so shrewdly infuse in many others who look like me to ensure that they never advance themselves but slave to make your dreams come true for pennies on the dollar.

I know that I am so worth so much more to me than you acknowledge on these corporate plantations that do nothing to manifest my God given destiny. My only desire is to wake up and enlighten so many others who are reluctantly trapped in your evil clutches so that they too can one day feel the joy that I do everyday that comes once you make the commitment to never be abused and exploited again.

So you keep all that we’ve accumulated together and know that I have the the strength to make it out here on my own. I built this place for you under distress so it shouldn’t be that hard to thrive without the pain and suffering that you’ve imposed on me ever since we’ve been together!

From one who will never pledge allegiance to an oppressive flag in my life again, I wish you the best but it’s not working out for me.

How can you pledge allegiance to a flag that represents a country that doesn’t even give a DAMN about you?