Willow Smith, the infamous daughter of Will and Jada Pinkett-Smith, pushes the envelope once again as to where the line of decency exists and what is proper or not for a young teen who is being aggressively groomed to be a Hollywood star.

While many people might brush off or minimize the controversy that has now mushroomed like a nuclear bomb on the countless social media platforms, most are saying that this time she has gone a bit to far.

Well, there was a photo posted to the Instagram account of the former “Hannah Montana” star Moises Arias that clearly shows him in bed shirtless with the 13 year old Willow Smith who is on top of the covers with her head propped up by her right arm.

Even before you see the photo, if it were to be described to you it wouldn’t seem right or proper.

Now, let me tell you where I’m coming from with this.

I know that the world of promoting a Hollywood star to be, one must market oneself and keep ones face in the limelight in ways that will pack more punch in order to compete with the massive amount of news and information competing for our attention. 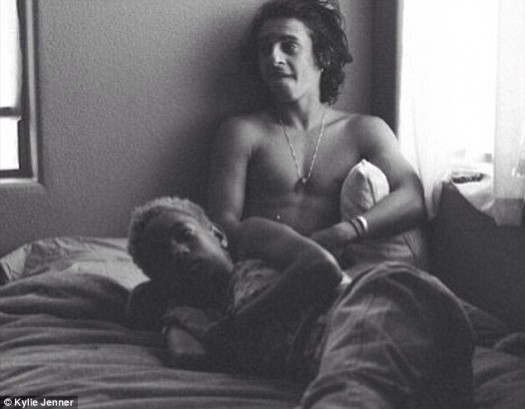 I’ve written articles before on Willow Smith, and while I don’t dislike any child I do feel that she has been given too much control over her young life knowing how the sharks in the entertainment industry can be and how ruthless they are for an underage child.

Her parents, Will and Jada Pinkett-Smith, have been criticized in the past for a parenting style that has raised more than a few eyebrows because of the freedom that they’ve allowed both of their children in Willow and Jaden.

Last year, they allowed Willow and Jaden – who starred in the Karate Kid film – to move about freely and without adult supervision at the 2014 Coachella Valley Music Festival last April.

I don’t care how famous or how “safe” any adult appears whether I know them or not, no one will have any potential private access to my children without having to go through me!

Their laid back “let the children raise themselves and control their own destiny” kind of parenting style is really a recipe for disaster down the line because no child comes into this world wiser than the parents or slicker than a pedophile that is hellbent on getting a child into a position that no parent wants to ever discover.

But it must be said that Will and Jada – although they deny it in the present day – are some of the biggest freaks in Hollywood whispered to have an open relationship with God knows how many or actually who.

Now I’m not saying that they are purposely putting their child out there like that for the purpose of her coming into any harm, but if their particular moral fuses are blown then their parental radar HAS to be flawed somehow over and above that of a parent who is strict enough righteously to keep their child protected 24/7.

But back to the photo…….

Me myself, I love visuals, I love photos, especially the type of pictures used in advertisements.

In an advertisement, there are NO STONES LEFT UNTURNED and every aspect of that ad is scrutinized and picked apart not only for what it obviously convey, by for the subliminal messages that projected that are not as readily spotted by the normal consumer.

With so much riding on the image of any star, they’ve all had that sit down with the managers and agents as to how to conduct themselves on social media to fit in perfectly with their brand.

So with the constant “crossing of the razor thin moral line” with young Willow Smith you’ve got to really ask yourself, “what is HER particular brand?

What we have to understand is that with this modern day platform called social media, it is a tremendous opportunity to disperse free information directly whether it be written or photographed to the fans in real time in order to form a personal relationship with those who adore you.

It’s a great thing but it does have the huge potential to backfire and even destroy a career if utilized in the wrong manner.

Now with that being said, you can’t tell me that with a child as advanced and as cunning as a Willow Smith, that she did not understand the line that she was crossing when she allowed herself to have that picture taken and then afterward posted by Moises Arias.

Being the young stars that they are, I’m quite sure they knew that it might cause somewhat of a stir but maybe not as big a controversy as it actually did.

Look at the mood of this photo – let me be honest with you as I’m not trying to insult but must call it as I see it – it conveys to me a feeling of a lazy afternoon that has two lovers basking in the afterglow of their mutual orgasms and the feeling of being pleasurably “spent” as they lay so close to each other near the window that casts some sensual shadows on their youthful forms.

Heck, this picture is so pregnant with an undercover sexual vibe that it wouldn’t have surprised me to see Willow laying back in the same exact position that she is in puffing on an after intercourse cigarette like they do in the movies! LOL!

The internet is well known to be a haven for pedophiles who will fixate on the uploaded photos of so many underage children. Why would one want to make it easier to be stalked and harassed by a twisted stranger and why would anyone want to add fuel to their masturbatory fires by giving them the visual stimulation that they desire to help them wack off?

What were Willow’s parent’s feelings about the photo?

They both say that their daughter is very mature and that Willow is old enough to make her own decisions. They both also believed that the photo was an artistic expression and innocent fun.

Innocent fun? Any parent on their job would want to know WHERE was this photo taken, who took it and why would you be on the bed with a dude who is 20 years old in the first place?

I don’t care how much of a friend you are to him, to me, something is wrong with a 20 year old who hangs out with a 13 year old.

I know personally, at 20 years old, I was out there in the world feverishly trying to get as much grown woman pussy as I possibly could – and I’m not even condoning my foolish behavior – as though my life depended on it! Not spending time in the bed shirtless with a 13 year old.

Something definitely ain’t right with this at ALL!

We know that many children begin to feel their first feelings of sexual stirrings in their body at this age, so with a photo of Willow Smith in the bed with her “friend” Moises Arias, does this tell the millions of fans that Willow has that it’s okay to do the same?

Do you know how many 20 year old men out there would take advantage of a 13 year old who just might be convinced over a short period of time to experiment with the “safe” act of oral sex?

I say safe because many men who are predators will attempt to convince that that act is safe because no one will get pregnant from it or it’s not really sex.

I know this is graphic talk but in these days of so many children being taken advantage of I think that this photo subconsciously conveys the wrong message and will open the doors for more abuse to go on simply because the star of a young fan signs off of it in a non verbal manner.

Certain messages are shared without even having to say a word, this is definitely one of them in my book and I just can’t allow it to cross my path without being brutally honest without adding my two cents.

We as a collective need to stop being so starstruck and hold a child to their place regardless of how “mature” their parents claim that they are, childhood should NOT be rushed and most of the time when it is, it ends up being yet another sad episode of “E! True Hollywood Story!”

Your Brother “Who Don’t Go For No Mess”,

Previous : Is The Institution Of Marriage & Concept Of Family Targeted For Extinction? – The LanceScurv Show
Next : Positive Pregnancy Tests For Profit & The Big Business Of Leveraging Your Coochie For Cash!